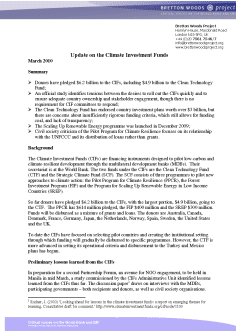 This briefing can also be viewed as a PDF.

The Climate Investment Funds (CIFs) are financing instruments designed to pilot low-carbon and climate-resilient development through the multilateral development banks (MDBs).  Their secretariat is at the World Bank. The two funds under the CIFs are the Clean Technology Fund (CTF) and the Strategic Climate Fund (SCF). The SCF consists of three programmes to pilot new approaches to climate action: the Pilot Program for Climate Resilience (PPCR), the Forest Investment Program (FIP) and the Program for Scaling Up Renewable Energy in Low Income Countries (SREP).

So far donors have pledged $6.2 billion to the CIFs, with the largest portion, $4.9 billion, going to the CTF.  The PPCR has $614 million pledged, the FIP $400 million and the SREP $300 million. Funds will be disbursed as a mixture of grants and loans. The donors are Australia, Canada, Denmark, France, Germany, Japan, the Netherlands, Norway, Spain, Sweden, the United States and the UK.

To date the CIFs have focused on selecting pilot countries and creating the institutional setting through which funding will gradually be disbursed to specific programmes. However, the CTF is more advanced in setting its operational criteria and disbursement to the Turkey and Mexico plans has begun.

Preliminary lessons learned from the CIFs

In preparation for a second Partnership Forum, an avenue for NGO engagement, to be held in Manila in mid March, a study commissioned by the CIFs Administrative Unit identified lessons learned from the CIFs thus far. The discussion paper1 draws on interviews with the MDBs, participating governments – both recipients and donors, as well as civil society organisations.

Central to its findings is the tension between rolling out the CIFs quickly, and developing maximum country ownership of plans and engaging stakeholders extensively.

In-country stakeholder engagement on investment plans and proposals was recognised to be limited. At the moment, CIF engagement in a recipient country appears to go little further than the government. There needs to be significant improvements to engagement with poor and vulnerable communities as well as greater local consultation so that projects and plans are informed by context-specific knowledge and capacity. There are also concerns about the definition of the ‘transformational’ change towards which the CIFs are intended to lead and the extent to which they are doing so.

While the report is expected to spark discussion at the Partnership Forum, no requirements have been made for the CIF committees to respond to the recommendations or draw up plans of action in response.

$4.9 billion has been pledged to the CTF and $3.26 billion worth of country investment plans have been endorsed.

The programming of the CTF is the most advanced and as a result civil society analysis and engagement is also more advanced relative to the other funds. Civil society observers have been engaging with CTF funding decisions and criteria.

The CTF criteria allow for lending to gas plants, some forms of biofuels, power plant retrofits as well as ultra-supercritical coal plants. Although more efficient than conventional coal, a supercritical coal plant will still emit millions of tons of carbon dioxide each year of its 30 year life.6  Though none of the investment plans endorsed so far include supercritical coal projects, the eligibility of this type of project for CTF funding highlights the need for scrutiny of the plans approved as well as fundamental flaws in the criteria.

The interpretation of these criteria was put to the test when the Ukraine Investment Plan was considered by the CTF committee. As the investment plan was considered by the CTF committee in October 2009, independent analysis from civil society observers to the fund raised questions about the transformational impact of the components of the Ukraine’s plan that would update the country’s gas network and introduce a combined cycle gas turbine. They argued that the proposed facility did not justify concessional finance because it was not fully compliant with the CTF criteria on carbon emission levels and efficiency gains.

Civil society observer to the CTF, Smita Nakhooda of World Resources Institute, has emphasised that the institutional and regulatory context that frames country investment plans must be considered. Governance issues are not yet included in the results framework of the CTF and the level to which they are addressed in investment plans varies.

Furthermore, there are ongoing inconsistencies between CTF funding and the Bank’s larger lending portfolio. These are highlighted by a comparison between the $500 million the CTF is investing in Eskom in South Africa for renewable and energy efficiency projects, and the $3.75 billion the Bank is considering lending Eskom to build a new coal-fired plant.

Other aspects of the CTF operations that have raised concern include the lack of transparency in the process for deciding upon country investment plans. These are discussed in committee meetings from which observers from the UNFCCC, GEF and civil society are excluded. In addition, the country investment plans have so far been developed with little stakeholder engagement beyond governments.7

A target of $250 million was set in order for the Scaling up Renewable Energy in Low Income Countries Program (SREP) to become operational. The SREP was finally launched with the announcement of financial support of $50 million by the USA at Copenhagen.8 In February 2010, the Japanese government also announced a pledge of $40 million to SREP. Total pledged contributions to SREP now amount to $300 million.9

Civil society expressed preliminary concerns during the design phase that the SREP may focus too heavily on foreign direct investment rather than considering what kinds of investments need to be made to further development.

The SREP sub-committee held a meeting in early February to set criteria for selecting an expert group as well as pilot countries. The CIF Administrative Unit is now looking for nominations for these experts. At the February meeting, it was agreed that over the course of the year, the sub-committee will approve programming procedures, financing modalities and a results measurement framework.10

In February, Japan pledged $60 million to the Forest Investment Program (FIP),11 which now has a total of $409 million pledged. It is not yet operational, but its next steps are to select five pilot countries (with three back-up countries); to finalize and approve operational guidelines, financing modalities, and investment criteria; and to design a grant mechanism to support the participation of indigenous peoples and local communities.

The expert group, which is responsible for proposing the pilot countries, has recommended Indonesia, Ghana, Laos, Peru, Burkina Faso.  The central African forests commission (COMIFAC), Mexico and the Philippines are listed as an additional three, if funds are available.12 The sub committee has been asked to approve these recommendations at the Partnership Forum.

There is a tension between the objectives of the FIP to support transformation through improving governance, institutional capacity and law enforcement on the one hand and generating large-scale private sector investment on the other. The danger is that without the necessary framework conditions in place, large investments are likely to backfire, and run the risk of resulting in more deforestation. The World Bank’s involvement in REDD has traditionally been through dealing with logging companies, and this may continue with the FIP, as companies claim funding for protecting carbon sinks through sustainable forestry management.

At the sub-committee meeting in early February, there was enthusiasm from some donor countries to reduce the number of criteria that an investment strategy would need to satisfy and to seek more coherence with REDD+.13 The danger is that by adopting greater ‘flexibility’ on its criteria, the FIP may follow the same path of the forest carbon partnership facility (FCPF) and allow investments to take place before the investment framework is ready.14 The debate is ultimately a political one about who decides when a country is REDD ‘ready.’

At the end of January 2009, two regional groupings and nine countries were invited to participate in the Pilot Program for Climate Resilience (PPCR). This includes the Pacific and Caribbean, and Bangladesh, Bolivia, Cambodia, Mozambique, Nepal, Niger, Tajikistan, Yemen and Zambia.

The programme will provide funding to these countries in two phases. Phase one is a technical assistance phase which includes looking at how countries’ development plans can be made more climate resilient. At the end of phase one, decisions will be made about what types of investments countries should make, and countries will be offered grants of up to $1.5 million to develop their strategic programmes. Phase two will be offered as grants with an option of additional loans and pilot countries will each receive up to $50-70 million in additional resources to implement their programmes.15

Zambia is the first country that has begun to prepare a plan for a phase one proposal. It is expected that this will raise discussion about what the PPCR sub-committee wants to see in phase one proposals, in order to guide other countries.

There are a number of ongoing concerns over the operations of the fund. There is concern that the PPCR is not under the authority of, or even accountable to the UNFCCC, where developing countries have equal voice in matters regarding climate finance and adaption.  Additionally, the PPCR is now competing with funds that are under the UNFCCC, such as the Kyoto protocol Adaptation Fund. Furthermore, the MDBs as the implementing agents have a relatively poor record of community participation and consultation. Finally the PPCR will fund programmes for adaptation through a mixture of grants and loans.16

Of the $617.5 million in the PPCR, approximately $371 million, over half of the funding, is in the form of loans. The loans will be used in phase two of the PPCR, which includes the implementation of the strategic programme. The PPCR funding is therefore not compensatory nor is it based on the polluter pays principle. While the World Bank states that loans are ‘optional’, in reality many countries will likely have no other choice but to take on loans to access desperately needed adaptation funding.17