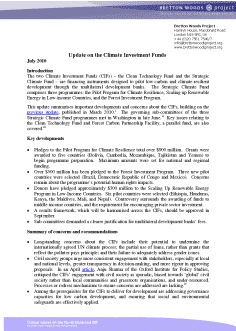 The Reformed Financial Mechanism of the UNFCCC: Renegotiating the role of civil society in the governance of climate finance.

This briefing can also be viewed as a PDF.

This update summarises important developments and concerns about the CIFs, building on the previous update, published in March 2010. The governing sub-committees of the three Strategic Climate Fund programmes met in Washington in late June.1 Key issues relating to the Clean Technology Fund and Forest Carbon Partnership Facility, a parallel fund, are also covered.2

Summary of concerns and recommendations

It was proposed that multilateral development banks (MDBs) would charge a fee of $350,000 for each investment project by the PPCR, FIP or SREP, to cover staff and other costs of project development, support, and reporting. (Sub-committees could approve higher fees if justified by country or sector circumstances.) This is approximately 40 per cent more than the standard MDB project fee and country representatives demanded a clearer justification of the cost; the secretariat will provide a more detailed paper for the next meeting. In the case of grants for programme preparation or technical assistance, the MDBs plan to charge 5 per cent of the grant value (as is standard for smaller trust funds, with sub-committee approval required if that amount exceeds $75,000).

Background
The PPCR aims to demonstrate how climate risk and resilience can be integrated into core development planning and implementation. Funding is disbursed in two phases: the first for developing country Strategic Programs for Climate Resilience, and the second for implementation. In 2009, nine countries (Bangladesh, Bolivia, Cambodia, Mozambique, Nepal, Niger, Tajikistan, Yemen and Zambia) and two regional groupings (six Caribbean countries and three Pacific countries) were invited to participate in the PPCR. The sub-committee has since approved $1.5 million to support the preparation of Zambia’s Strategic Pilot Program, and $225,000 to support Nepal’s phase 1 proposal.

The June sub-committee meeting approved phase one grants, each of $1.5 million, for Bolivia, Cambodia, Mozambique, Tajikistan and Yemen, to begin preparation of their Strategic Programs for Climate Resilience, and capacity building for implementation. The US and Japan expressed reservations about funding for Bolivia because it is not supporting the Copenhagen Accord, but they did not block approval. Proposals from other countries that have been invited to participate may be approved by mail before the next sub-committee meeting.

Ilana Solomon of ActionAid International, one of the four civil society observers on the sub-committee, reports that there was little evidence of substantive consultation with national or local civil society or affected communities in the preparation of these proposals. Yet the sub-committee approved the maximum amount of phase one funding for each country with little debate, which critics say is characteristic of the PPCR. The process also came under pressure from US officials, who repeatedly intervened in the meeting to try to move ahead as quickly as possible, seeking results in order to obtain future funding from the US Congress.

Where regional programmes are not complete, it was agreed that countries could move forward individually, provided there is a brief description of how individual country proposals fit within the regional framework. This will reduce delays, but some country representatives expressed concerns about the potential loss of benefits from cooperation and capacity sharing that regional programmes are supposed to bring.

Funding was capped at $40-50 million per country programme and $60-75 million per region. A maximum of 20 per cent of the total amount of funds available as loans will be allocated to each pilot. No specific allocation system was agreed.

Three new pilot countries were selected in June: Brazil, Democratic Republic of Congo, and Mexico. Other countries may be considered for pilots if further funding becomes available. The European Bank for Reconstruction and Development will cease its engagement with the FIP because non-tropical regions are excluded from FIP pilots.

Civil society and private sector observers expressed concerns that the criteria for country selection, which are almost exclusively technical, fail to take into account recipient countries’ governance or absorptive capacities. Simon Counsell of UK NGO the Rainforest Foundation notes that the FIP pilot countries are at only the earliest stages of preparation work supported by the Forest Carbon Partnership Facility, which is supposed to lay the foundations for FIP activities. He says, “What actually seems to be happening under the FIP is really ‘business as usual’ World Bank forest sector lending – particularly for plantations and ‘sustainable forest management’ (i.e., industrial-scale logging of natural forests) – all under the guise of ‘doing something about climate change’.”

The FIP’s operational guidelines were revised to include reference to both social and environmental safeguards, and to the UN Declaration on the Rights of Indigenous Peoples (UNDRIP). However, recommendations by civil society observers that the guidelines require compliance with relevant international environmental and human rights agreements were rejected. There are no specific criteria to comply with UNDRIP, nor any requirement for the free, prior and informed consent of affected indigenous peoples.

Program for Scaling Up Renewable Energy in Low-Income Countries (SREP)

Background
The purpose of the SREP is to help catalyse renewable energy markets in low-income countries. It is the least developed of the CIFs, having only been launched during the Copenhagen summit in December 2009. Past concerns have included the programme’s emphasis on foreign investment rather than endogenous development.

Six pilot countries were selected: Ethiopia, Honduras, Kenya, the Maldives, Mali, and Nepal. The selection of two lower middle-income countries (Honduras and the Maldives, as well as the consideration of a third, Mongolia) provoked controversy among some donors given the programme’s mandate to support low-income countries. NGOs called for sharper definition of the SREP’s focus on access to electricity and alleviation of energy poverty, particularly in rural areas, as distinct from the Clean Technology Fund’s (CTF) support for middle-income countries. Six further countries will be shortlisted for SREP consideration if more funding becomes available, including three countries previously recommended (Armenia, Liberia and Mongolia). For the remaining three, least developed and low-income countries will be prioritised, preferably in the Middle East and North Africa or Pacific regions. A possible regional pilot will also be reviewed. It was decided that countries could receive grants of up to $1.5 million to fund the preparation of investment plans.

Civil society groups questioned whether it was right to include encouraging private sector investments to increase renewable energy capacity as an SREP criterion, arguing that the deciding factors should be affordability and service quality, particularly for the poor. One of the donor country energy experts has also raised concern about the Bank’s tendency to focus narrowly on individual projects, rather than on stimulating renewables markets more broadly.

Debate surrounded whether the SREP should fund hybrid systems that include non-renewable energy, and no agreement was reached. Potential funding for hydropower prompted civil society organisations to urge vigilance.

However, the emphasis on the need for good governance, consultation, and community consent in programme design was welcomed as an improvement on the lack of engagement by the PPCR and CTF with stakeholders other than governments.

The CTF is designed to provide scaled-up financing for the demonstration, deployment and transfer of low-carbon technologies. It runs on a different schedule from the SCF and its subcommittee last met in March. Over $4 billion has been allocated to thirteen investment plans (in Colombia, Egypt, Indonesia, Kazakhstan, Mexico, Morocco, the Philippines, South Africa, Thailand, Turkey, Ukraine, Vietnam and the regional Middle East and North Africa plan).

Observers have stressed the need to tackle the policy, institutional and regulatory barriers to low carbon development if the CTF is to fulfil its aim of sustained and transformative impacts. These factors are not currently adequately addressed in CTF analysis or monitoring. There are also calls for efforts to strengthen countries’ capacities to produce low carbon technologies themselves.

In an April critique of the Middle East and North Africa plan for concentrated solar power, the Bank Information Center argued that the plan promoted energy for export rather than increased access, involved water-intensive technology in a water-scarce region, and engaged insufficiently with regional civil society.

Concerns also surround funding for biomass projects, which can cause soil depletion and increase reliance on fossil-fuel based fertilisers.

Background
The FCPF is a parallel fund to the CIFs, designed to assist developing country efforts to reduce emissions from deforestation and forest degradation (REDD) by providing value to standing forests. Its Participants’ Committee met at the end of June in Guyana.

Updates
Five Readiness Preparation Proposals were assessed, from Argentina, Costa Rica, Kenya, Nepal and the Republic of Congo, and $17.2 million awarded for them to move forward. Official summaries of updates from Peru and Tanzania on the formulation of their preparation proposals will be published on the FCPF website. The committee agreed that an independent evaluation of the FCPF would be carried out.

A civil society observer reports that countries’ Readiness Preparation Proposals are moving ahead without rigorous review. Mark Rentschler of US NGO the Bank Information Center, observer to the FCPF, says that the quality of both technical reviews and committee discussion has deteriorated, with a lack of attention being given to plans’ weaknesses. The plans have suffered from inadequate transparency and consultation with local civil society, according to Simon Counsell of UK NGO the Rainforest Foundation. The FCPF’s “ill-conceived plans … fail to address the underlying causes of deforestation, and might make things worse,” he says. A review of country proposals also found weaknesses surrounding plans to ensure good governance of REDD+ programmes (which cover conservation and forest management, as well as deforestation and degradation). The report, by UN-REDD and three NGOs, showed that while proposals identified important governance considerations, they tended to lack in-depth analysis of problems or concrete steps for successful implementation and monitoring of good governance.

Civil society groups have serious concerns about plans to increase the number of delivery partners (which provide technical support and due diligence) for the FCPF Readiness Fund and to allow them to apply their own safeguards, rather than those of the World Bank. Organisations including Friends of the Earth US, Greenpeace International and the Pan-African Climate Justice Alliance said in a June letter that “the proposed changes represent a potentially significant weakening of safeguards and standards.” They argued that developing minimum standards to cover all partners would be a burdensome process and could to lead to a lowest-common denominator approach. They reiterated concerns that the facility management team has never formally explained how requirements of the FCPF charter, including those relating to safeguards and indigenous rights, would be fulfilled. In addition, the failure to make the proposal available for public review and comment prior to the Participants’ Committee meeting showed a serious lack of transparency. A process for the selection of delivery partners and common framework for safeguards will be discussed at the next committee meeting.

The Reformed Financial Mechanism of the UNFCCC: Renegotiating the role of civil society in the governance of climate finance.