From issue 75 of The Bretton Woods Update 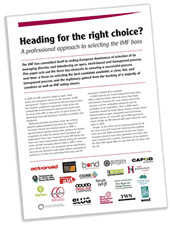 A fully formatted PDF version of this report is also available.

The IMF has committed itself to ending European dominance of selection of its managing director, and introducing an open, merit-based and transparent process. This paper sets out the three key elements to ensuring a successful process next time: a focus on selecting the best candidate available; a clear, fair, and transparent process; and the legitimacy gained from the backing of a majority of countries as well as IMF voting shares.

In 2009, the IMF agreed to “adopt an open, merit-based and transparent process for the selection of IMF management”. 1 It was a commitment that was long overdue. The informal ‘gentlemen’s agreement’ made at the end of World War II that European governments could select the head of the IMF so long as the US got to choose the World Bank boss had long been regarded as outdated and illegitimate.

Reforming selection procedures at the top of these powerful global institutions has been the subject of numerous internal and external reports. In 2001, a specially formed working group made practical but limited suggestions to make the process more formalised and professional. These were “endorsed” by the IMF board, but have never been implemented. 2 Instead, during the selection of the last IMF managing director (MD) in 2007, a short press release 3 set out a one paragraph person specification, and said any individual could apply “without geographical preferences.” In the end, convention held sway and the Europeans installed their candidate.

A 2008 report by the Fund’s Independent Evaluation Office called for further reform to ensure that “likely effectiveness should be the main criteria used in the selection, and the competition should be open to candidates of all nationalities.” 4 Then a 2009 expert committee headed by South African finance minister Trevor Manuel called an open, transparent and merit-based selection process an “essential” part of IMF governance reform. 5  Finally, an IMF internal staff paper raised the issue again in 2009. 6

Despite all this effort, and an ongoing process led by the dean of the IMF board, the Fund has been publicly silent since the 2009 commitment. In fact, two deputy managing directors have been appointed since then, and have cemented rich countries’ dominance of top positions; the three IMF deputy MDs are now from the US, Japan and the UK. 7

The impression that the rich governments which have run the IMF have dragged their heels on this enormously important issue is hard to avoid.  It matters who the head of the IMF is, and it matters how they are chosen. It matters for the legitimacy of an organisation that, through the stringent conditions often attached to its loans, has a powerful hand in economic policy making – and hence politics – in many countries, particularly poorer ones. It matters for the effectiveness of the Fund, which is struggling to adapt to an emerging world order where the old Western powers are gradually being eclipsed by faster growing, larger southern countries. And it matters because the MD wields significant power both within the institution, and by using the position as a pulpit from which to influence global policy-making on the most critical issues.

Three things are important.  First, governments need to select the right person for the job. Critically important is recognising the difficult challenges the MD faces, and the various roles they must play.  Second, the selection process must be – and must be seen to be – open, fair, transparent and merit based. A lot of thinking has gone into this issue, and the proposals below reflect the emerging consensus about how this could be achieved. Third, the MD has to have a broad base of support across the world, and must be independent of any small grouping of powerful states.

The IMF MD has a difficult job. On one hand, the MD must bang together the heads of the world’s major economic powers, to help prevent global or regional economic crises, and persuade them to act in the interests of all, not in their narrowly defined self-interest. In the past, the IMF has singularly failed in this task, in part because the MD has been too closely associated with Western powers.  How to manage the international monetary system to prevent future crises has been a key element of the G20’s agenda in recent years, and it is possible the IMF will be expected to play a bigger role in future.

On the other hand, the MD needs to focus on providing IMF support to countries during crises to help them recover and build the basis for sustainable development in the future. Historically, most of these countries have been developing countries, who still dominate IMF lending, despite recent high profile difficulties in Europe. Too often the IMF has pushed ‘one size fits all’ austerity policies without enough attention to specific circumstances or the impacts on the lives and jobs of people in the affected countries. So the candidate should be well versed in economic issues, particularly those of developing countries – though not necessarily an economist – with a pragmatic approach not tied to any particular ideology or school of thought. The IMF can only succeed in these roles if it is seen to be publicly accountable and transparent in its operations.

The IMF will need to agree on a more detailed ‘person specification’ to outline the qualities, qualifications and experience that candidates for the top job at the IMF must have. It should include the following elements.

The commitment to an open, fair, merit-based process is the easiest part to fix. Standards and procedures are widely used across the world for the selection of high office holders, which can be adapted for use by the IMF. It is an embarrassment that the IFIs have not yet been able to organise such a process for any member of senior management.

An open process is necessary to bolster public confidence. The following steps are uncontroversial and should be the minimum that apply:

It is obvious that the MD should be selected on merit. More details about the kind of candidate that the IMF needs are above, but the following improvements to the process will be essential:

Even the best designed process cannot eliminate the possibility for behind the scenes horse-trading and arm-twisting by powerful governments acting in narrowly or mistakenly defined self-interest. The process set out above should introduce far more public scrutiny. In addition, the following measures should help to ensure a fair process and avoid the danger that a few powerful countries try to agree the nominations process behind the scenes.

Governments need to get it right this time; no efforts should be spared to ensure the best possible candidate is selected through a process that is seen to be fair, transparent and merit-based. There must be no carve-up behind closed doors; the MD needs the support of both a majority of shareholders and a majority of countries. In a time of global economic uncertainty, governments must set in place the system needed to ensure future decisions about who runs one of the world’s most powerful institutions are transparent, legitimate and effective. Nothing less will do.

7 The latest nomination, Nemat ‘Minouche’ Shafit has joint UK, US and Egyptian nationality, but has been a senior UK civil servant in the Department For International Development for the past 6 years