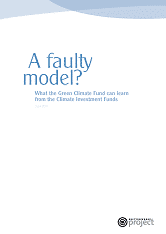 of this report is also available.

Various civil society groups from across the world called for a new global climate fund that is representative, democratically governed, accountable, and tailored to meet the needs of the world’s poorest.

At the United Nations Framework Convention on Climate Change (UNFCCC) negotiations in Cancún in December 2010, the World Bank was granted the interim trusteeship of the newly established Green Climate Fund (GCF). Recent events indicate that the Bank and other multilateral development banks (MDBs) will also have an influential role in the design of the fund. The Climate Investment Funds (CIFs), a collaborative MDB climate finance initiative housed at the Bank, are being pointed to as ‘a best practice’ model for the GCF.

This paper critically assesses the appropriateness of the CIFs as a model for a global climate finance fund. It takes proposals and recommendations by civil society groups as its starting point, and uses them as benchmarks to analyse the CIFs. It finds that in terms of institutional arrangements the CIFs have achieved some notable progress that acknowledges some of the critical issues raised by civil society groups. However, in operations and performance there are serious concerns. The paper focuses on six benchmark areas:

Role of the trustee – There is a potential conflict of interest in the multi-functional role that the Bank plays in the CIFs, where it acts as trustee, secretariat and implementing agency. Any decision that replicates this arrangement in the GCF would introduce questions over its legitimacy.

Governance – The CIFs have equal representation amongst developed and developing countries on the governing boards, but fall short of the representation called for by civil society groups and many developing countries, which would give recipient countries the majority of seats and allocate positions for the most vulnerable and affected communities. The civil society observer role on CIF governing committees is an important innovation, but it is not powerful enough to influence decision making, and, given the resources available and the scope of the role, may not fairly and legitimately represent many constituencies.

Country ownership – There are significant concerns that country ownership in CIF programmes is undermined by the MDBs acting as implementing agencies. This contravenes civil society and developing country calls for direct access to climate finance in a global fund. Furthermore, evidence from in-country operations shows that the MDBs can wield undue influence over the planning and delivery of CIF projects, at the expense of real country-driven policies and planning.

Participation – The participation of affected communities and civil society groups is vital in building responsive and accountable climate finance projects and programmes, which is recognised in CIF design documents and implementation guidelines. However, evidence suggests that to a large extent affected communities and local civil society have played a very limited role in the design, delivery and monitoring of CIF programmes.

Financing modalities – There is a need to address the current imbalance favouring mitigation funding over adaptation funding. CIF projects overwhelmingly favour mitigation efforts, and contrary to the polluter pays principle, adaptation funding under the CIFs overwhelmingly consists of loans rather than grants. There are also serious doubts over MDBs’ ability to leverage large amounts of private finance, and a lack of transparency and effective measurement to be able to gauge the extent of additional investment leveraged.

Reaching the most vulnerable – Climate finance allocation disproportionately favours middle-income countries, who also receive the majority of CIF financing. The CIFs have developmental aims codified in their objectives, however, recent evidence suggests that in practice the potential developmental impact of CIF projects, as well as their effect on gender issues, is not being realised.

Any affirmation of the CIFs as a model for the GCF should be regarded with scepticism. It is vital that the transitional committee of the GCF take into account the concerns and critiques reiterated in this paper when considering lessons to be learned from the CIFs, and that the GCF is designed to ensure these problems are not replicated.