From issue 86 of The Bretton Woods Update 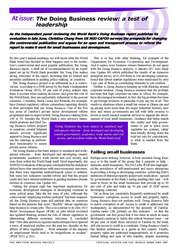 A fully-formatted, but unreferenced PDF version of this briefing is also available.

As the independent panel reviewing the World Bank’s Doing Business report publishes its evaluation in late June, Christina Chang from UK NGO CAFOD surveys the prospects for changing the controversial publication and argues for an open and transparent process to reform the report to make it work for small businesses and development.

By this year’s October annual meetings, we will know what the World Bank board has decided on what happens next to the institution’s controversial and most popular publication, the Doing Business report. A draft set of recommendations by an expert panel set up by World Bank president Jim Yong Kim makes strong criticisms of the report, including its limited and uncertain usefulness in guiding policy-making in countries.

The Doing Business project is as influential as it is controversial. According to a 2008 survey by the Bank’s Independent Evaluation Group (IEG), 85 per cent of policy makers take them it account when making decisions, and given the role of the World Bank, they are particularly influential in the poorest countries. Colombia, Sierra Leone and Rwanda, for example, have formed regulatory reform committees reporting directly to their presidents that use Doing Business. One of the five key areas of Zambia’s private sector development reform programme aims to improve their Doing Business ranking from 100 to 50 1. Besides the World Bank’s own advisory teams, which promote and fund Doing Business reform projects in countries, several bilateral donors provide significant support to Doing Business and use the rankings as performance benchmarks to assess private sector reforms.

Yet Doing Business has been subject to sustained and widespread criticism – from developed and developing country governments, academics, trade unions and civil society, and even from within the World Bank itself2. Most importantly, the 2008 IEG evaluation of the project concluded that the indicators did not have clear associations with macroeconomic outcomes, that there were important methodological issues to address, that some key indicators needed reform and that the project could only have limited usefulness in guiding business climate reforms in countries3 (see Update 66).  Getting the project right has important implications for economic development strategies of developing countries in some critical areas.

Take the hot issue of jobs. Although the controversial ’employing workers indicator’ has been suspended, the Doing Business team still publish data on countries based on the premise that more “flexible” labour regulations help business to create jobs. This is in contrast to its own 2013 World Development Report (WDR) on jobs which reviewed and updated thinking around the role of labour regulation in determining different economic outcomes. It concluded that: “New data and more rigorous methodologies have spurred a wave of empirical studies over the past two decades on the effects of labour regulation … Most estimates of the impacts on employment levels tend to be insignificant or modest.” (WDR 2013, p 261)

This is in line with other thinking, for example of the Organisation for Economic Co-operation and Development (OECD). And it seems even business owners themselves do not agree with the Doing Business analysis. A January IFC Jobs Study (see Update 84) which published the results of an extensive enterprise survey of 45,000 firms in 106 developing countries, found that labour market regulations were mentioned by only 3 per cent of firms surveyed as constituting obstacles to job creation.

Neither is Doing Business keeping up with thinking around corporate taxation. Doing Business assumes that the problem has been that high corporate tax rates in Africa, for example, have discouraged investment. In fact, the big problem has been to get foreign investors in particular to pay any tax at all. This results in situations where a small bar owner in Ghana can end up paying more taxes than the major industrial brewery next door4 and where governments are left with little revenue to invest in much needed essential services to support the development of local small businesses. Guidance that better matches this reality and helps governments to put in place more equitable tax systems, rather than blindly driving down the total tax rate for corporations, is what is needed from the Bank.

Perhaps most striking, however, is how unsuited Doing Business is to the needs of the group that it purports to help – domestic small businesses. The 2013 jobs WDR also highlighted the prevalence of self-employment and micro enterprises in providing a living in developing countries. Achieving Kim’s ambitions of shared prosperity and poverty eradication – agreed by governments at the Bank’s spring meetings this year – will need to focus on the small businesses that provide up to 90 per cent of jobs and make up 50 per cent of GDP across developing countries.

Yet on three key constraints frequently mentioned by small businesses: corruption, access to credit and property rights, Doing Business does not perform well. Doing Business fails to tackle corruption at all. Access to credit is addressed, but inadequately, as demonstrated by the anomaly of Zambia. Zambia ranks 12th globally on this indicator  – so that the government can feel proud that it has done as much as many developed countries to tackle this critical business issue – yet 98 per cent of small firms surveyed in Zambia by the Bank still cite access to credit as a constraint5. Doing Business clearly has limited usefulness as a guide in this respect. Finally, property rights is addressed inappropriately, as it promotes formal titling and ease of title transfer, despite increasing recognition that these can in some circumstances undermine traditional community rights and access, which are important for poor men and women’s livelihoods. In the process land reforms may instead facilitate ‘land grabs’.

These discrepancies are at the heart of CAFOD’s critique of Doing Business. We know from experience that giving people the tools and skills they need to start a business is only half the job. You can do this ad infinitum with limited success, if the business environment in which they operate is not conducive.

But we are not in principle against a Doing Business-style project . There is value in a tool that can start a discussion on investment climate reform, an issue that has been neglected in the past; and in providing guidance for governments, backed up by good data. However, for Doing Business this means real reforms, being honest about its limitations, appropriate in its use, and open to change as evidence and business needs evolve.

Knowing a little bit of history of Doing Business is informative. The project started with the desire to collect information about the regulatory environment in an easy way, by surveying (primarily) law firms. Doing Business did not, therefore, emerge from an analysis of what investment climate reforms matter most for poverty eradication or local small businesses, with indicators based on evidence6.

Doing Business is not designed, therefore, to present governments with a comprehensive blueprint of reforms or even an idea of the most important reforms. Nor does it pretend to take account of local context (which will be important in determining what kind of reforms are appropriate), nor does it pretend to give guidance on trade-offs that might be involved in decisions around types and levels of regulation or taxation.

This is why Doing Business has to be used alongside complementary tools, such as enterprise surveys – which tell a government a lot more about local business needs and priorities – and national consultations with local small business organisations and other groups. It also means rethinking the implications of ranking countries according to how closely they match the Doing Business-preferred checklist of reforms.

It would be unfair to conclude that the Doing Business team is ignorant of these criticisms and of the need to change in light of them. Increasingly, there are disclaimers and caveats in the yearly report regarding their limitations and how they should be used (although these are less keenly observed by governments and are undermined by the large media budget accorded to the report to champion countries that have done most to move up the rankings). The employing workers indicator has been suspended, if not yet abolished or reformed, and the ‘paying taxes indicator’ no longer encourages governments to reduce taxes to zero (although it still encourages them to be lowered). A ‘getting electricity indicator’ is being piloted as a result of enterprise surveys highlighting the importance of this issue to local businesses. Most importantly, the team have begun looking at the evidence for the indicators being causally linked to economic outcomes, including poverty eradication. Presumably, if the data does not support the usefulness of an indicator, it will be reformed or dropped. This willingness to change is to be encouraged, as much more needs to be done.

The ten year anniversary of the project, a global economic crisis and increasingly vocal developing country representation at the World Bank have combined to prompt a much-needed review of Doing Business.

The expert panel formed as part of this review echo many of our criticisms in its draft report: that the project is relevant to only a sub-section of the business community, its methodology is flawed, its usefulness in policy formulation limited and in light of this the use of an overall ranking, its communications strategy and even the title of the report need rethinking. The panel also begin to make some useful recommendations for change – for example moving the project to the research department of the Bank, in an attempt to better align it to the Bank’s development mandate. However, the panel’s report raises more questions than it answers and more thinking needs to be done. It is an important, but first step, in what needs to be an ongoing reform process.  Whether and how this process happens is the next challenge for those interested in developing a better tool for private sector development that reduces poverty.

But Kim is under very public pressure, particularly from US interests who believe that Doing Business promotes an American model of market reform and from former IFC staff who built their reputations and careers on what has turned out to be a flawed project. Kim has been challenged to consider defending Doing Business as a test of his leadership, including by former Bank president Paul Wolfowitz. His office has already issued a statement suggesting that this pressure might well have been effective7, possibly overriding one of the panel’s key recommendations by sticking to ranking countries according to their Doing Business scores.

The Doing Business review is also a test of leadership for the World Bank’s board. The challenge for them will be to put vested interests to one side, and to agree an open, transparent process to reform Doing Business so that it can be based on what works in practice for small businesses and developing country policy-makers, rather than what works for the politics of the Bank and its major shareholders.