IMF's "incompetence" and "failures" in Europe led to "suffering"

Saying one thing but meaning another: IMF advises protecting jobs and cutting spending 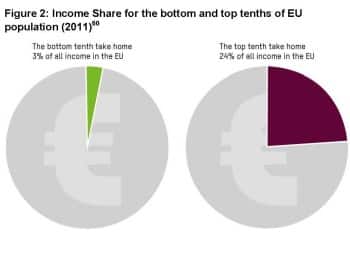 A September report from international NGO Oxfam, A cautionary tale, spotlighted the impact of European austerity policies on levels of inequality. The paper, which was based on 13 European country case studies, noted the role of the IMF in many European loan agreements (see Observer Autumn 2013) and found that “in the years since the financial crisis, the countries most affected by austerity measures – Greece, Italy, Spain, Portugal and the UK – have seen one of two impacts: either the richest tenth of the population has seen their share of total income increase, or the poorest tenth has seen their share decrease. In some cases both impacts occurred.”

Based on Oxfam’s extensive operations in developing countries, the paper found that “the European experience bears striking similarities to the structural adjustment policies imposed on Latin America, South-East Asia, and Sub-Saharan African in the 1980s and 1990s. Countries in these regions received financial bailouts from the IMF and the World Bank after agreeing to adopt a range of policies including public-spending cuts, the nationalisation of private debt, reductions in wages, and a debt management model in which repayments to creditors of commercial banks took precedence over measures to ensure social and economic recovery.” Oxfam argued that these policies “forced the pain of economic slowdown on to those least able to bear it. Structural adjustment policies led to stagnating incomes and rising poverty in many countries, scarring generations across the world.”  The report concluded: “These policies were a failure; a medicine that sought to cure the disease by killing the patient.” Oxfam argued “it does not have to be this way” and called for European governments to undertake economic stimulus, job creation, investment in public services, greater public participation in political processes and fairer tax systems.

The Fund has been conducting research on inequality since being stung by severe criticism in the wake of the 2008 financial crisis, when then IMF managing director Dominique Strauss-Kahn pushed for greater attention to income inequality in the Fund’s work. Papers published in 2011 and 2012 (see Update 85) said reducing inequality could lengthen growth spells and that the design of tax and spending policies were largely responsible for the higher levels of inequality in developing countries.

These policies were a failure; a medicine that sought to cure the disease by killing the patient.Oxfam

A June IMF working paper by Laurence Ball of Johns Hopkins University and a team of three IMF researchers looked at fiscal consolidation for a sample of 17 OECD countries over the period 1978-2009. It showed that “fiscal consolidation has typically led to a significant and persistent increase in inequality, declines in wage income and in the wage share of income, and increases in long-term unemployment.” A September IMF working paper by Jaejoon Woo, Elva Bova and two other IMF researchers looked at a broader sample of 48 advanced and emerging economies, confirming the earlier findings: “Spending-based consolidations tend to significantly worsen inequality, relative to tax-based consolidations. So do large-sized consolidations. The paper also found that unemployment is an important channel through which consolidation increases inequality.” Neither paper disaggregated the effect by other criteria, such as gender or ethnicity. The papers, respectively, recommend “fiscal measures that are approved now but only kick in to reduce deficits in the future” and “progressive taxation and social benefits”.

The IMF has also been looking at the other side of the coin – the impact on inequality of high growth in Asian countries. A June working paper by Ravi Balakrishnan and two other IMF staffers found that “while poverty has fallen across the region over the last two decades, inequality has increased, dampening the impact of growth on poverty reduction.” Their analysis of the data “suggests that education and labour market variables (e.g., industry employment) are key drivers. Financial reform also increases the degree of inclusiveness.” The authors recommend “higher spending on health and education and enhanced social safety nets (e.g., increases in pension coverage and conditional cash transfers). Greater attention must also be paid to labour market reforms that would increase the voice of labour, hence boosting its share in total income (e.g., minimum wages and reducing duality in labour contracts).”

These recommendations have not yet been heeded by IMF staff designing lending programmes. A September statement from the International Trade Union Confederation (ITUC, a global trade union umbrella organisation) noted: “In several European countries, weakening of labour market regulations and institutions has been a major feature of IMF loan programmes or, in non-borrowing countries, policy advice. The recommendations or conditions have included facilitating non-standard employment, reducing or freezing minimum wages, reducing employment security, weakening or decentralising collective bargaining arrangements and weakening trade unions.” The ITUC found the IMF’s emphasis on labour market flexibility “particularly incomprehensible in light of its stated commitment to inclusive growth.”

The ITUC statement goes on to say “inequality within countries is also being accentuated by cuts in public services and transfer programmes that particularly affect those at low and middle incomes, even as progressive tax regimes are being eroded. The emphasis on public spending cuts rather than increased tax revenues in many of the crisis countries, some of which have received IMF loans and others which are highly responsive to the Fund’s policy advice, is contributing to this trend.” The ITUC recommended five different “measures for creating decent work and reducing inequality”, including: “Ensure that women benefit from policy actions to avoid a further deterioration of gender gaps in employment and income levels.”

IMF's "incompetence" and "failures" in Europe led to "suffering"

Saying one thing but meaning another: IMF advises protecting jobs and cutting spending