Science to deliver, but no ‘science of delivery’, Owen Barder

New World Bank strategy accused of being "unambitious" and "cosmetic" 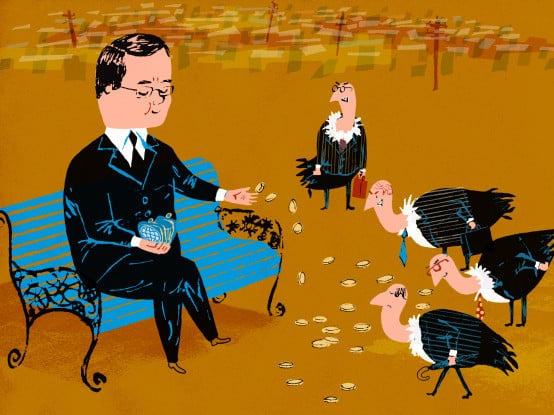 At the annual meetings in October, World Bank president Jim Yong Kim is planning to get sign off from the world’s finance and development ministers on a new strategy for the World Bank Group (WBG, see Update 86). It sets out the institutional changes that Kim argues will enable the Bank to meet the April-endorsed twin goals of poverty reduction and boosting ‘shared prosperity’ (see Update 85, 84).

The draft strategy document was approved by the World Bank board of executive directors in early September before being sent to finance ministers. It contains a summary of the changing global context for developing countries and how development challenges have changed, before setting out “a value proposition” for the Bank Group:

The strategy does not set out what the Bank will do, instead outlining the processes by which it will choose what to do. There are two big make-overs planned under the new approach: how country strategies are determined, and how the Bank is organised internally.

The Bank claims the “new engagement model seeks to maximise the use of evidence and analysis to help country clients focus on the challenge of meeting the two goals in the context of country ownership and national priorities.” The existing country strategy process will be broken down into three components: (1) a systemic country diagnostic which will “identif[y] the most critical constraints to, and opportunities for, reducing poverty and promoting shared prosperity sustainably, while explicitly considering the voices of the poor and the views of the private sector”; (2) a country partnership framework (CPF) which will “describe focus areas for WBG support … the framework will outline the most promising interventions, the underlying working hypotheses and supporting evidence, expected outcomes, and lead indicators”; and (3) performance and learning reviews. An implementation plan, which “will guide how country teams aim to achieve the results set out in the CPF, including the broad mix of anticipated WBG services”, will be prepared separately.

One of the biggest challenges will be managing the tensions between the Bank’s corporate goals and those of developing country governments. The strategy claims that the Bank will both “exercise greater selectivity” and “customise its support to countries as their development needs evolve”, but provides little detail on how conflicts between country objectives and the Bank’s preferences will be managed.

The strategy emphasises “transformational engagements” which looks like a push to engage in fewer, larger high-risk projects at the regional or national level rather than working on small-scale, locally-relevant projects. Patricia Miranda of Peru-based NGO network Latindadd argued that “instead of prioritising sectors such as infrastructure, the Bank should work towards developing an alternative development model, one that is more sustainable and takes better care of the environment.”

The draft strategy also pushes greater collaboration across the public sector and private sector arms of the Bank to create “One World Bank Group” (see Update 86), which it says  “is central to the WBG strategy”. In the process it promised “mechanisms to promote a stronger pipeline of joint infrastructure projects”. It says the Bank “will increasingly promote public-private partnerships [PPPs]”, including in sectors such as health, education, sanitation and climate change, despite past criticisms on the excessive cost of PPPs, their poor performance in delivering expansions of service provision, and their negative impacts on poor people’s livelihoods (see Update 84, 81).

The internal restructure has set staff on edge, as the Bank is planning “a right-sizing exercise [that] will reduce costs and complexity”, meaning job cuts. Part of this will be the creation of selected “global practices” with technical expertise on issues organised globally.  These practices will replace the Bank’s old matrix management system which had functional ‘networks’ such as ‘sustainable development’ and ‘human development’ with broader remits. The strategy says “the choice of areas in which to build the practices will be based on evidence of alignment with the goals, the likely development impact and comparative advantage, taking into account client feedback”, and that there will be “dynamic entry and exit”. However, there is no clear plan of how the Bank will manage bureaucratic inertia which makes internal structures hard to eliminate once they are created.

In late September the Bank formally agreed that there would be 14 global practices, including:

After approval of the strategy in October an implementation paper will add detail to the restructuring process. Next year’s “budget will reflect the prioritisation and sequencing to be outlined in the implementation paper, and bring together the right-sizing exercise, the work on global practices, and the other elements of the change agenda.”

The sudden departures, announced at end July, of both managing director Caroline Anstey and senior vice president Pamela Cox, the two senior Bank managers who were responsible for the strategic reforms and restructuring, have set staff on notice that failure to fall into line with the new strategic direction could be perilous.

The draft strategy is missing detail on how to end an organisational culture which has valued pushing money out the door over development outcomes. The document contains numerous mentions of changing staff incentives, including for encouraging a solutions culture, focusing on multi-sector approaches, deepening client engagement on implementation, fostering a culture of results, pushing staff to work on long-term transformational engagements, encouraging collaboration across the Bank Group, pushing cost savings and revenue enhancement, and encouraging selectivity. An outline of a new staff incentive system to accomplish all these aims was not included.

Critics who faulted Kim for the lack of a goal on inequality will be further disappointed. In late September the Bank’s director for poverty reduction James Saavedra-Chanduvi blogged that “a reduction in inequality by itself does not result in an improvement of the welfare of the less well off in all circumstances.” In May he clarified the definition of ‘shared prosperity’: “We need to focus first on growing, as fast as possible, the welfare of the less well off. But we’re not suggesting that countries redistribute an economic pie of a certain size, or to take from the rich and give to the poor.”

The move towards more public-private collaboration has also been challenged, with Shripad Dharmadhikary of Indian NGO Manthan Adhyayan Kendra saying that the strategy “has exaggerated notions of the role that the private sector is playing and can play in poverty eradication and prosperity of bottom 40 per cent.” He goes on to say that reliance on the private sector and collaboration across the Bank not only “seems to be a backdoor way of getting public resources to private entities” but also “is a very risky strategy and is essentially incompatible with, and will undermine the two broad goals.”

The impact of the strategy proposal on the safeguard review (see Update 85) has also been a focus of criticism. Vincent McElhinny of US NGO Bank Information Center said: “This is worrisome if certain decisions related to the corporate strategy close space for decisions related to unfinished discussions of safeguard architecture, scope and implementation incentives, among others, before that review even runs its course.  The safeguard consultation process and the policies themselves risk losing credibility if management takes premature decisions to alter or dilute safeguard requirements.”

Kim’s plan to create a ‘solutions bank’ (see Update 83) was called into question by a July evaluation of the Bank’s knowledge-based country programmes by the Bank’s Independent Evaluation Group (IEG). The review studied 48 technical assistance, advisory service and economic policy projects in nine middle- and high-income countries, and found that the Bank was “more effective when it worked on specific sectors rather than broad topics”. The IEG found “expected outcomes were achieved (or likely to be achieved) in 47 per cent of Bank knowledge services” but that this average figure fell to about 25 per cent for economic policy and public sector governance work, and 30 per cent for work on private sector development.  It argued the Bank should “emphasise the ‘how to’ options, as opposed to the diagnostics and the ‘what to do’ recommendations, to enhance client ability to own final policy decisions, action plans, or strategies.” In contrast, the strategy requires the Bank to do country diagnostics and for it to engage in “the complete cycle from policy design through implementation” and in “policy dialogue”.

Owen Barder of US think tank Center for Global Development criticised the top-down model embodied in the ‘science of delivery’, calling it “a doomed enterprise”. He wrote: “It is still a version of the waterfall model which is widely used by almost everyone in the aid industry. These problems simply cannot be solved that way. You cannot design solutions to complex problems: they can only be solved by adaptation and iteration.”

The “science of delivery”, also called “deliverology” (see Update 86), came in for sharp words from Kevin Watkins of UK think tank ODI in July: “Society is not a petri dish in which the results of microbiological interventions can be identified, isolated and transferred. Yes, we need to learn from best practice. But we also need to turn the spotlight on the political forces and power relationships that deliver poor-quality services and perpetuate high levels of inequality.” He argued that “Kim has turned the spotlight on a critical set of concerns” but that “the curious absence of power and politics in the deliverology tool-kit” would undermine its usefulness. Watkins noted that the “political bargains struck between elites often have the effect of excluding the poor.” Miranda concluded, “countries’ national development plans, developed with civil society participation, should define where and how to use external financing, technical support or other mechanisms of support.”

Science to deliver, but no ‘science of delivery’, Owen Barder

New World Bank strategy accused of being "unambitious" and "cosmetic"