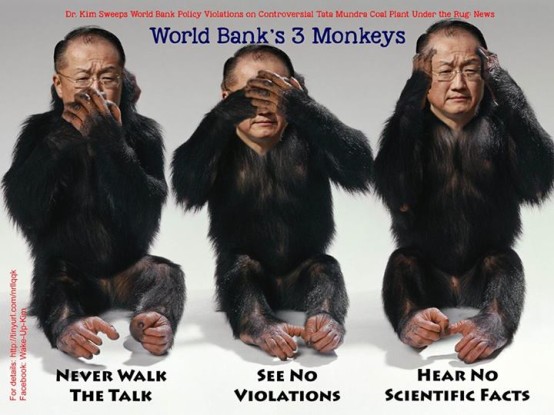 The World Bank made headlines in July when its new energy directions paper announced it would “provide financial support for greenfield coal power generation projects only in rare circumstances” and focus its energy investments on natural gas and hydro power (see Observer Autumn 2013). This shift away from coal appears to have been consolidated after the US Treasury announced in October it will only approve financing for conventional coal plants overseas in “very rare” cases unless they use carbon capture and sequestration technology. The US is the Bank’s biggest shareholder with 15% of votes. The UK announced a similar position in November.

According to a Bank official, funding would still be available to the poorest countries if “there’s a material development impact and there are no alternatives”. The Bank’s July energy directions paper includes a loophole with similar wording. Nezir Sinani, climate change coordinator at US NGO Bank Information Center said the interpretation of loopholes – and particularly in the case of Bank support to a coal fired power plant in Kosovo (see Update 86) – will be crucial if there is to be a major change in the Bank’s energy strategy. A mid-October briefing by NGO Oil Change International (OCI) reveals that in 2013 the World Bank’s energy lending portfolio was heavily focused on fossil fuels with only eight per cent directed at increasing energy access for the poor. OCI found $2.7 billion was directed at fossil fuels, $2.6 billion at energy projects such as large hydropower and $1.7 billion for clean energy including solar and wind.

In an open letter published in October, over thirty Indonesian and international civil society organisations called on the Bank to end all forms of financial support for several coal projects, including the 2,000 megawatt Central Java Power Plant and the Puruk Cahu-Bangkuang coal railway which will facilitate additional coal extraction in the province of Central Kalimantan. The letter said these projects “undermine the Bank pledge to limit coal” and “pose an unacceptable threat to local livelihoods, health, and climate change”. It concluded: “instead of guiding Indonesia – already the world largest coal exporter and third largest emitter of greenhouse gases – onto a low-carbon development path, the Bank infrastructure programme has fortified a coal-filled future for Indonesia.”

The Bank replied in an October letter that it had not and would not provide financial support to coal projects in Indonesia. However, September and October briefings by OCI claim the Bank did give direct and indirect support through a $850 million infrastructure development policy loan (DPL). OCI concluded: “the Indonesia DPL demonstrates the need for significant strengthening of the review mechanism for DPLs to ensure the Bank is truly pursuing sustainable development”. A November letter by 68 civil society groups from 28 countries strongly condemned Bank president Jim Yong Kim for his continued support for the International Finance Corporation’s (IFC, the Bank’s private sector arm) investment in the controversial Tata Mundra coal power plant in India (see Update 82). In October the IFC’s accountability mechanism, the Compliance Advisor Ombudsman (CAO) upheld a complaint by local fishermen who demanded action to remedy the negative health and social impacts of the power plant. Instead of agreeing to act to resolve the situation, the IFC, which gave a $450 million loan for the 4,000 MW plant in 2008, rejected the CAO’s findings. Kim’s office approved the IFC response prompting over 100 Indian civil society groups to demand in November that the IFC stop funding Tata Mundra. The letter strongly criticised Kim saying: “By your decision to keep your eyes closed to the damning findings of CAO, you are complicit in the human rights violations, livelihood loss, impacts of air pollution, water contamination, and perilous marine ecological disaster in the wake of the IFC-funded project”.

In late November the IFC wrote to the CAO: “we share your commitment to sustainable development and improving the lives of local communities”. The letter gave details of environmental and health studies that will be carried out.  Indian civil society groups replied “We reject this statement and action plan” and said the “IFC is trying to confuse the public, making a mockery of communities; concerns and yet again, undermine CAO and its findings.” They again demanded withdrawal of financial support for Tata Mundra and noted, “it is baffling that President Kim is still reluctant to take any action on the findings, and leave it to IFC, the violator, to be its own judge”.

World Bank accountability on the line

The Tata Mundra and other recent cases prompted 27 civil society organisations including Human Rights Watch, Oxfam and International Rivers to write to president Kim  in mid November “to express our concern about the trend by World Bank Group (WBG) management to refute, deny or otherwise fail to act on critical findings of its accountability mechanisms – the Inspection Panel” and the CAO. They demanded the Bank takes urgent action to learn from mistakes and fully respect the accountability mechanisms.

The letter also mentions the Bank’s $3.75 billion loan for the controversial Eskom coal-fired power plant in South Africa (see Update 81) which was revealed in early November to be seeking to delay the implementation of pollution controls which would reduce the release of harmful pollutants such as sulphur dioxide. Bobby Peek of South African civil society group Groundwork said “the current delay will likely be a permanent rolling delay, as Eskom will wish to avoid the expense and effort of securing water supplies.” Another emblematic case cited in the letter is the IFC’s controversial investment in a palm oil project in Honduras (see Update 86).