The International Union for Conservation of Nature 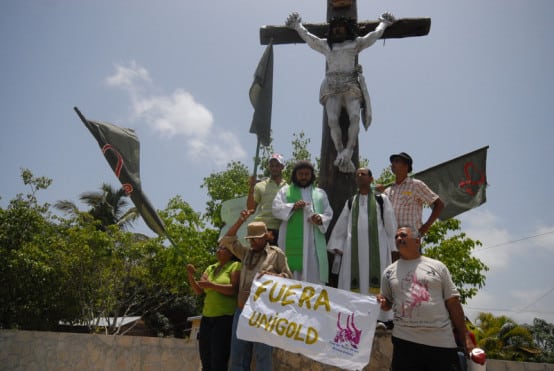 August protest against Unigold in the Dominican Republic.

Civil society has raised new concerns about the Simandou iron ore mining project in south east Guinea, in which the Bank’s private sector arm, the International Finance Corporation (IFC), holds a 5 per cent stake (see Update 82). The project, which is set to become the largest mining project in Africa’s history, is already years behind schedule with the Financial Times reporting in late October that Rio Tinto is delaying production in the southern part of the Simandou mountains to start in 2018, rather than in 2015. The project has also been affected by an alleged corruption scandal related to the acquisition of mining rights to the northern part of Simandou by BSG Resources, the mining arm of an Israeli billionaire’s family conglomerate, in 2008. Despite these problems, according to Guinea’s new five year World Bank country partnership strategy, endorsed in early October, the Simandou project will “potentially play a transformational role” in the country.  Noting challenges, it argued that the Bank “has a key role to play in overcoming these”.

Prior to a mid-November technical briefing on Simandou for Bank board members, a document prepared by experts from Guinea, US and Germany, was circulated to the Bank’s board members. The document raised fundamental questions about how this type of extractive investment will help reduce poverty and benefit poor people in Guinea, considering “corruption and poor governance conditions, including serious violations of human rights”. It noted that the IFC investment was approved by the board despite the lack of completed social and environmental impact assessments and emphasised the findings of the Bank’s 2003 Extractive Industries Review (see Update 38), that certain conditions should be in place prior to investments in the extractive industries, including respect for human rights.

Furthermore, the document highlighted that the project allows for impacts on affected habitat for endangered chimpanzees to be “offset”, by “promises of protection of habitat elsewhere”, and argued that according to scientists “chimps cannot easily adjust to another area, and, in any event, there is no suitable area to which they can move or be moved”. Furthermore, it referred to a January report on biodiversity offsets by the International Union for Conservation of Nature and the International Council on Mining and Minerals which concluded that “not everything can be offset – such as species extinction”.

Hundreds of protests demonstrate that our people are not interested in destroying our water, soils and woods for minerals.Domingo Abreu, Environmental National Assembly, Dominican Republic

Co-author of the briefing, Diawadou Diallo, a political scientist from Guinea, questioned what lessons the Bank has learned from the infamous Chad-Cameroon pipeline project (see Update 83, 69, 49): “This mega project was also meant to be ‘transformational’, yet it led to increased poverty and worsening governance conditions. The overall population is worse off and the affected communities have been left without land, water and freedom of movement.”

The mid-November briefing to the Bank board also included the controversial IFC funded Mongolian mine Oyu Tolgoi (see Update 84, 83, 82). Prior to the meeting a statement by seven NGOs, including Mongolia-based Oyu Tolgoi Watch and US-based Sierra Club, welcomed that the April social and environmental audit of the project by the IFC’s independent auditor is finally accessible, but voiced concerns that the audit and the operational management plans failed to address many of the issues raised earlier, including in a February letter signed by 31 groups alongside an online petition gathering over 500 signatories. They called on the board to hold disbursement until critical issues have been addressed, including the complaints to the IFC’s accountability mechanism, the Compliance Advisor Ombudsman (CAO), to ensure that  “herders are guaranteed access to clean water, clean air, and adequate pastureland”.

Other projects with potential social and environmental impacts include the IFC’s late May equity investment of up to $11.2 million in Unigold, a Canadian mining exploration company, for its Neita project near the Haiti border in the Dominican Republic. Apart from equity finance, the IFC aims to provide advice and “a stamp of approval” on environmental and social performance standards, to assist the company in raising further equity. However, in the same month Dominican senator Adriano Sánchez Roa told the Dominican Republic newspaper La Información that the permit for exploration is violating the decree for a national park, including the origin of several rivers which are now “facing a potential ecological disaster”, and called on the authorities to “stop this barbarity” with urgency. Domingo Abreu of Dominican NGO Environmental National Assembly said: “Hundreds of protests demonstrate that our people are not interested in destroying our water, soils and woods for minerals. We have the biggest biodiversity in this hemisphere, but it is fragile. We must not lose it looking for gold that will not be for us, but for big transnational mining companies.”

Furthermore, a fifth complaint on the IFC-funded Yanacocha mine in Peru (see Update 82, 79, 84), from a family claiming lack of compensation related to their large land holdings, was filed with the CAO in June. After an initial assessment the complaint was moved to a voluntary dispute resolution process facilitated by the CAO in October. Also in South America, the terms of reference for investigation of the CAO case on Eco Oro Minerals in Colombia (see Update 84) were agreed in late July. The preceding late June appraisal concluded that the investigation should include a focus on “whether IFC’s approach to the definition of the project and the assessment of its [environmental and social] risks and impacts was adequate”, as well as whether sufficient attention was paid to potential long term impacts of the investment.

In late April the CAO received a complaint from Cradle of Life, a conservation and eco-tourism organisation, together with local farmers and land owners, regarding the IFC’s 14 per cent equity stake in Tsodilo, a mining exploration company, with regards to activities in Badplaas in South Africa. According to the CAO, the complaint related to “a number of environmental and social issues allegedly … including loss of employment opportunities, loss of livelihoods, potential land degradation and pollution, inadequate capacity to compensate land owners, negative impact on the reserve status of the area and prospective investors.” After Tsodilo declared that they believe the complaint to be premature, and therefore refused to discuss it with the complainants, it was transferred to the CAO’s compliance function in September.

In late August the CAO closed the case relating to the 2012 violence resulting in the deaths of 40 workers on the IFC funded Lonmin Marikana platinum mine in South Africa (see Update 82). The CAO appraisal raised concerns regarding “the adequacy of IFC’s [environmental and social] performance standards in relation to this investment”, linked to “potentially more systemic issues” in terms of how the standards are applied to “an equity investment in a publicly listed company, over which IFC had limited leverage”. However, the CAO concluded that “absent a complaint from affected workers” further investigation “is not warranted”, since the relationship to “the tragic outcomes of the August 2012 dispute is insufficiently established.”

The International Union for Conservation of Nature