Honduras claims: ‘Worst is yet to come’

Human Rights and the Culture of the World Bank

CSO response to the CAO investigation into IFC investment in Corporación Dinant, Honduras 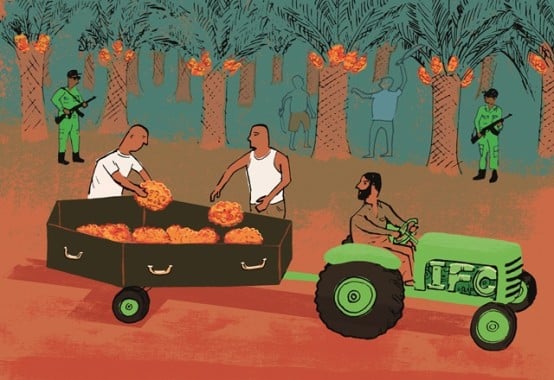 A January audit report has strongly criticised the International Finance Corporation (IFC),  the World Bank’s private sector arm, for its $30 million loan to a controversial Honduran palm oil project managed by Corporación Dinant. The audit by the Compliance Advisor Ombudsman (CAO), the IFC’s accountability mechanism, was initiated in April 2012 due to claims that Dinant had been involved in human rights abuses, including the killing, kidnapping and forced eviction of farmers in the Bajo Aguán region, where the corporation’s palm oil plantations are located and land rights are heavily disputed (see Update 85). An estimated 92 people have been killed between 2009 and 2012, the majority of them local farmers, according to figures from the Honduran National Commission for Human Rights. The audit was finalised in October 2013 but Bank management held up its publication (see Bulletin Dec 2013).

The CAO report concluded that, among other things:

In response to the CAO, the IFC disagreed with some findings and took others on board without specifying which ones. It also defended its investment in Dinant and the company’s human rights record. The IFC’s proposed action plan included an investigation into alleged abuses, more training of staff, screening of security guards, more corporate social responsibility and the setting up of a corporate grievance mechanism. In a statement Dinant said it did “not agree with certain comments in the [CAO] report, which the company feels are unfounded”, denied it had a role in the abuses, but that they took the allegations very seriously and would “continue working closely with IFC in order to comply with their performance standards”.

The 32 Honduran civil society groups that form the Plataforma Agraria condemned the Bank for “not consulting farming communities in the Bajo Aguán region affected by the actions of the Dinant Corporation before approving a loan to the company” and criticised the IFC’s investment which “is not focused on improving the lives of communities” and instead “financed land grabs which displaced families and communities”. In a statement 70 Honduran and international civil society organisations, including the Movement of Unified Campesinos in Aguán (Honduras) and international NGO Oxfam, labelled the IFC’s response to one of the most “damning” investigations ever issued by the CAO as “totally inadequate”. It commented that “the IFC not only refuses to address [the] systemic issues, but compounds them with further attempts to cover up its wrongdoings”. The statement called for “an admission of fault, a commitment to root and branch investigation and reform, and apology and remedy to affected communities”. It called on the IFC to suspend any further disbursements, including the pending second $15 million tranche, unless the “material and intellectual authors of the crimes and human rights violations committed against organised farmers and their supporters in the Aguán Valley have been brought to justice. If Dinant is found to be responsible for any of these crimes and human rights violations, then the IFC should terminate its relationship with Dinant immediately”. The statement also called for the Bank to initiate an “independent investigation of the underlying systemic reasons identified by the CAO” to address the organisational culture which incentivises IFC staff to prioritise financial results and ignore environment and social consequences. Reportedly, the Bank board discussed and rejected the IFC’s action plan in mid January, forcing a revision due in late January.

[See 27 January update at the end of this article]

The Central American Mezzanine Infrastructure Fund (CAMIF), a private equity fund due to receive an IFC investment decided not to invest in the Agua Zarca hydropower project in Honduras. The dam is being strongly resisted by the Lenca indigenous people since April 2013 who say they have not been consulted and the project will destroy their livelihoods. They registered a complaint with the CAO in October following the killing of an indigenous protestor and legal intimidation (see Bulletin Dec 2013).

The CAO audit makes it clear the IFC knew about the allegations of Dinant’s involvement in human rights abuses during and after it had invested, raising questions about IFC’s influence on its clients’ behaviour. The Dinant case shows that non-compliance does not result in the IFC withdrawing investment. Furthermore, the IFC invested $66 million in Honduran commercial bank FICOHSA in 2011 despite Dinant being one of bank’s largest clients. These links led the CAO to start an investigation into FICOHSA in December 2013, which is due to finish in June. The gravity of the human rights abuses linked to Dinant raises further questions about the IFC’s priorities and how it chooses which private sector actors should receive financing. Revealingly the Inter-American Development Bank withdrew a planned $7 million loan to Dinant citing the “political turmoil” following a 2009 coup and Dinant’s “involvement in a controversy over real estate ownership”. The coup removed president Manuel Zelaya from office, who had begun a process of resolving land conflicts in the Bajo Aguán area among other social programmes.

The CAO report highlighted the importance of the IFC’s organisational culture as a contributing factor for non-compliance in the Dinant case because the “combination of client relationship, operational and compliance functions within project teams can generate conflicts of interest and conflicting incentives for staff and management”. It noted results are mainly judged mainly in financial terms which might incentivise “staff to overlook, fail to articulate, or even conceal potential environmental, social and conflict related risks.” The CAO concluded the “IFC’s handling of its investment in Dinant raises questions as to the robustness of its decision making structures around environmental and social issues in high risk contexts.” In a December article Canadian academic Galit Sarfaty argued the Bank’s “employees do not systematically incorporate human rights concerns into their everyday decision making” with many seeing human rights as a taboo subject. She said “obstacles include the internal incentive system, which emphasises lending targets rather than results on the ground.”

The Dinant case has taken on added significance because it is the first test of Bank president Jim Yong Kim’s approach to the private sector since heavy criticism of the IFC’s action plan to address CAO findings of negative health and social impacts of the Tata Mundra coal power plant in India (see Bulletin Dec 2013).

In early December Kim issued a public statement aimed at civil society: “we will make sure that action plans developed by IFC address the issues identified by the CAO’s reports” and that he would  regularly be sent implementation reports by the IFC and CAO. He defended the record of the IFC, saying private companies want to work with the institution because its “strong track record in environmental and social risk management has made it a partner of choice.” Local communities in Honduras and international civil society groups question whether Kim and the Bank are living up to that commitment.

Since this article was published the IFC has admitted mistakes had been made and announced it will revise its initial action plan. Civil society groups released a statement welcoming the IFC’s admission of its mistakes and credited the Bank’s Board for stepping in when the Bank’s management had failed to respond appropriately. However they said the IFC’s new response still falls seriously short of laying out a plan to ensure that communities’ human rights are respected in future.

Yoni Rivas, Secretary General of the Movement of Unified Campesinos in Aguan (MUCA) and member of the Plataforma Agraria, said: “We note the work done by the CAO and that the IFC has acknowledged its errors, evident in the human rights violations of local farmers and environmental damage in the Bajo Aguan by the Dinant Corporation. We hope that the World Bank does not disburse more funds to Dinat and other international banks do not make the same mistake.”

Honduras claims: ‘Worst is yet to come’

Human Rights and the Culture of the World Bank

CSO response to the CAO investigation into IFC investment in Corporación Dinant, Honduras