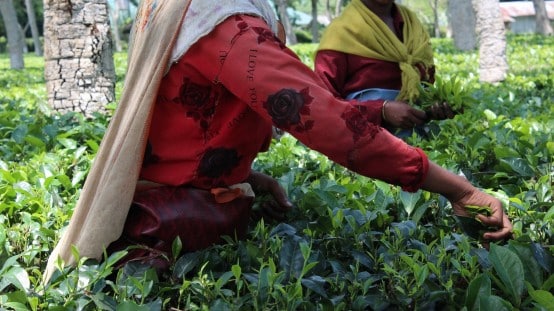 by Komala Ramachandra and Francesca Feruglio

In February 2013, three grassroots organisations: Promotion and Advancement of Justice, Harmony and Rights of Adivasis (PAJHRA), People’s Action for Development and the Diocesan Board of Social Services filed a complaint on behalf of tea plantation workers in Assam to the World Bank’s accountability mechanism, the Compliance Advisor Ombudsman (CAO), alleging numerous violations of human and labour rights on three tea plantations owned by Amalgamated Plantations Private Limited (APPL). Assam, a state in northeast India, is the source of more than half of India’s and one sixth of the world’s tea. Such large-scale production and profit rely on thousands of workers belonging to adivasi (indigenous) communities, forcibly brought to Assam’s tea plantations from central India 150 years ago. Today their living and working conditions remain shockingly poor, with the plantations lacking adequate essential services, such as healthcare, education, and food, and workers paid only rupees 90 ($1.5) per day, far below the state’s minimum wage of rupees 169.

In 2009, the International Finance Corporation (IFC), the private sector arm of the World Bank, invested $7.87 million in APPL, nearly a 20 per cent stake. Just under 50 per cent of APPL shares are owned by Tata Global Beverages, owners of the Tetley tea brand. The complaint details numerous violations of the IFC performance standards, international and national law, including excessively long working hours, inadequate compensation, poor sanitation and related health conditions, degrading treatment and abuse by management, and restricted freedom of association. The CAO compliance team is currently investigating the allegations, following a failed attempt to start a dialogue between plantation workers, their representative organisations and APPL. The company’s management refused to recognise the grassroots organisations, composed of people from tea plantations and who have family working on plantations, as legitimate worker representatives to participate in a dialogue process. Simultaneously, APPL was using retaliatory strategies (abruptly assigning workers to unfamiliar jobs, substantially increasing their working quota and even intimating that the complaints might lead to job losses)  against workers participating in the CAO process. The CAO was unable to address the rigid power dynamics that shape the exploitative relationship between management and workers, and the resulting intimidation and retaliation, leading to a compliance audit. “We knew that an audit was coming when the management would tell us to dress and behave well and would give us protective gear, which we would have to return back at the end of the day”, said a worker in one of the APPL plantations referenced by the complaint. “For years we have been demanding clean water, latrines and decent health care, yet we have never spoken to any audit team and no one has ever asked us about our work and living conditions. We expect this audit to be different, and our complaints to be actually heard”.

The CAO will now investigate whether the IFC met its due diligence requirements prior to investing in APPL, and whether it fulfilled its role as supervisor in addressing the ongoing violations. As extensive evidence shows, including a recent mid February report by Columbia Law School Human Rights Institute (CLSHRI) and a letter submitted by the complainants and civil society groups to the CAO documenting violations of state, national, and international law, the IFC failed on both accounts. Well documented historical and current violations of fundamental and labour rights are evident from the rampant malnutrition, illiteracy and maternal mortality present on all of Assam’s tea plantations, including those owned by APPL. Furthermore, workers are forced to join a union that does not represent their interests, and maintains poverty levels on the plantations through collusive agreements with tea producers.

Even after its investment was approved, the IFC turned a blind eye to egregious incidents on APPL plantations, such as the collapse in 2009 of an eight-month pregnant worker while she was plucking tea and the death in 2010 of a worker allegedly due to exposure to pesticide. According to the CLSHRI report, labourers’ unrest which followed the incidents led to the death of two other workers and criminal charges filed against some of the protesters. The IFC took no public action to address these incidents, despite a 2010 US Consulate investigation finding detailed in the CLSHRI report that APPL was “very controversial from a labour/legal/human rights perspective,” and a report of the International Union of Foodworkers on these incidents leading the CAO vice president to initiate a compliance audit in 2012. The audit remains open at the compliance stage. Instead, the IFC’s due diligence relied heavily on Tata’s reputation as a global “leader in progressive environmental, social responsibility and occupational health and safety initiatives” (from its 2006 environmental and social review of Tata) and on the company’s certifications from private entities, such as international NGO Social Accountability International’s SA8000, a voluntary standard for workplaces, and the Ethical Tea Partnership, a UK-based NGO, which establishes various labour and social standards for companies globally. Not only did the IFC fail to inquire into APPL’s inhumane working conditions, but it also paid no attention to how these certifications were obtained. Firstly, private certification programmes use self-assessments and auditing companies with varying standards for approval. Secondly, Tata Global Beverages is closely associated with the founding of the Ethical Tea Partnership and in the governance of Social Accountability International.

The IFC should have been aware of the structural injustices in Assam’s tea industry, and must now act responsibly to address these deep-rooted problems. The IFC must work with APPL to find ways to improve access to basic services, such as clean water, healthcare and education, on the plantations.  The IFC must also address the historical and ongoing exploitation of workers, in part by facilitating workers’ right to freely associate and form unions that will truly advocate for their interests.

APPL and the IFC’s uneasy reactions to the tea workers’ complaint, ranging from an outright denial of the allegations advanced by complainants to retaliation against workers and defensive media strategies, show that workers’ voices are finally being heard. While the results of the CAO process are yet to be seen, it has caused the first cracks in the entrenched inhumanity of Assam’s tea industry.

It is hoped that the CAO investigation will take place within the next three months –  the date is still to be confirmed. Stephen Ekka, director  of PAJHRA, one of the grassroots organisations involved in filing the complaint, commented: “We invite the investigation team to see with their own eyes that nothing has changed on the plantations since the World Bank got involved. The supposedly ethical and sustainable Tata company continues to make large profits from the mistreatment and exploitation of plantation workers. This cannot continue.”