CSOs’ letter to president of the European Parliament Martin Schulz

Troika becomes the villain in a Greek tragedy 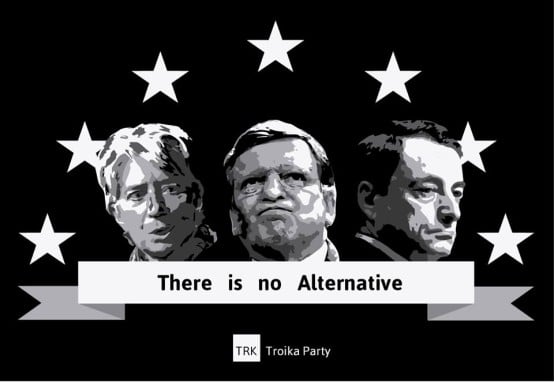 In late February the IMF, along with its Troika lending partners (the European Central Bank and European Commission), is conducting a delayed review of its lending to Greece. Though the Greek government is trumpeting its apparent success in delivering a primary surplus by drastically cutting expenditure, the economic, social and health consequences for Greek people continue to deteriorate and Greece may in fact require yet another loan (see Update 71, 83).

In an interview with Australian broadcaster ABC, coinciding with her attendance at the mid-February summit of G20 finance ministers, IMF managing director Christine Lagarde acknowledged that the Greek lending programme suffered from “miscalculations”, which were “the ones that led to … the wrong approach to the financial situation”. Lagarde added “we have done everything we could to make sure that the burden would be fairly borne by all and not just by the employees and the civil servants, we have made sure there was enough of a safety net so that people who were most exposed would not suffer too much”

The extent of Greek suffering was revealedby a February paper in the academic journal The Lancet. Titled Greece’s health crisis: from austerity to denialism, the paper found that 800,000 Greeks (or 7 per cent of the total population) now lack health coverage. The study also revealed large increases in rates of suicide, infant mortality, child abandonment, HIV infection and poor nutrition. Due to conditions stipulated in the Greek loan agreement with the Troika, the government has cut public spending for health to lower than any other country that joined the EU before 2004.

In 2012, the government actually cut more than the Troika had demanded in hospital costs and pharmaceutical spending to meet its overall fiscal commitments. The Lancet study reported that in Achaia province 70 per cent of respondents had insufficient income to purchase medicines prescribed by their doctors. The authors argued that official “denialism” has refused to recognise the “harmful effects of austerity on health” adding that “the failure of public recognition of the issue by successive Greek governments and international agencies is remarkable.”

In January a letter signed by 19 trade unions, human rights group and civil society organisations was delivered to Martin Schulz, president of the European Parliament, asking that he commission a report on the situation of human rights and democracy in Greece.  They wrote in reference to the Charter of Fundamental Rights of the EU  that “it is hard to find a single article that has not been violated by the Greek government during the last three years as part of the policies it has implemented against its own people.” A February report by news agency Inter Press Service also revealed that a fact-finding mission by the International Federation for Human Rights had visited Greece that month to examine “evidence that the austerity measures and structural reforms which the government has had to implement … [threatened] civil and political rights”.

Following a late February speech at Stanford University, Lagarde was asked by Nathalie Bridgeman Fields of US NGO Accountability Counsel why the IMF is the only major international financial institution lacking an accountability mechanism to enable people affected by its work to lodge a grievance. Lagarde responded that “I dissent”, and referred instead to the IMF’s own board of 24 executive directors (appointed by member states directly or via constituencies) as the group to whom the Fund is accountable. Civil society organisations have long called for an ombudsman to be appointed to enable those impacted by the IMF to file complaints that would be investigated independently.

Widespread media reports have indicated that the Troika lenders are discussing the potential need for yet another Greek loan package. According to newspaper the Wall Street Journal, during January’s EU finance ministers’ summit there was a secretive meeting of the Troika members and the German and French finance ministers to begin negotiations over the likelihood of a new loan to Greece. The article claimed that Yiannis Stournaras, Greece’s finance minister, “was not invited”.

Dutch finance minister Jeroen Dijsselbloem later claimed that talks on additional funding will not be held until after the summer, allaying fears of a new political crisis if Greece required additional funding prior to European elections in May. According to newspaper The Greek Reporter, in early February “Troika officials have estimated that Greece’s fiscal deficit for the years 2014 and 2015 will reach the amount of €8 billion and €11 billion by 2016. Thus, a loan of €20 billion would be enough for Greece to meet its financial obligations.”

The Greek government has emphasised its success in producing a primary surplus (when government revenues exceed expenditures, excluding interest payments on loans). However, this surplus has not yet been confirmed by the EU statistical service. Media reports, including financial newspaper Greek Money, have suggested the claimed surplus is the result of “creative accounting” to the tune of €1.5 billion. Lagarde alluded to the history of ‘creative accounting’ in Greece (see Update 71) in her ABC interview to downplay the Troika’s previous errors, saying “there has been miscalculation, misquotation of numbers”.

The negotiations between Troika members and EU states regarding a new loan pivot on their views of the Greek government’s willingness to go through with yet more reforms. Greek newspaper Kathemerini reported in February that “the eurozone and the International Monetary Fund hold the converging view that the Greek debt could be lightened if reforms and privatisations are promoted in Greece. Those least confident in the Greek authorities’ determination to see reforms through believe that a conditional restructuring of the debt would add one more incentive for the opening up of the country’s economy.”

The inquiry by the economic and monetary affairs committee of the European parliament into the work of the Troika (see Observer Winter 2014) produced a draft report that was adopted by the committee and referred to parliament in late January. The IMF failed to respond to the committee’s questionnaire, citing its responsibility as being directly to its members only. An IMF spokesperson confirmed in early February that Reza Moghadem, director of the Fund’s European department, did “address” the committee in an off-the-record “closed-door” meeting in late January.

The committee’s Austrian Christian Democrat MEP co-chair, Othmar Karas, said in February that the Troika was unaccountable and argued for “more democracy” in its activity. Fellow committee member and French Socialist Party MEP Liem Hoang Ngoc lambasted the Troika as both “opaque” and lacking “legitimacy and transparency”. Remarking on the MEPs’ investigation, The Economist newspaper referred to the Troika as the eurozone “hellhound” of Greek mythology, which in this case had trapped the “country in an economic underworld”, arguing that “reform is overdue” for the trio of lenders.

The European Trade Union Confederation submitted a report to coincide with the committee’s inquiry, in which they specifically accused the Troika’s policies of “imposing” an “avalanche of anti-labour measures abolishing key workers’ rights … often under the threat of ceasing loan instalments”. They argued that the “main thrust was to abolish both national and sectoral levels of collective bargaining.” Moreover, they asserted that the justification for the policies in Greece was never fulfilled: “despite massive austerity, and despite a round of debt restructuring, the public debt ratio continues to go up.”

CSOs’ letter to president of the European Parliament Martin Schulz

Troika becomes the villain in a Greek tragedy