Letter from DRC NGOs to the World Bank on Inga 3

Getting its hands dirty 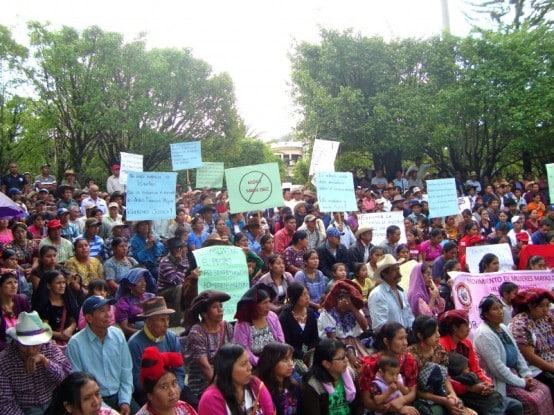 The World Bank has continued its push for hydropower projects (see Bulletin Dec 2013, Observer Autumn 2013, Update 86), including through its private-sector arm, the International Finance Corporation (IFC). After the US appropriations bill in January gave fresh hope for long awaited compensation for the communities affected by atrocities associated with the Chixoy dam in Guatemala (Observer Winter 2014, Update 86, 84), the spotlight has turned to the IFC’s involvement in another controversial dam through a financial intermediary, linked to human rights violations of indigenous communities (see Bulletin Dec 2013, Update 86, 84). In a February open statement, the Guatemalan NGO Departmental Assembly of Huehuetenango (ADH) referred to a five-year conflict over two hydroelectric projects on the Cambalam river being built by Hidro Santa Cruz, a subsidiary of Spanish company Hidralia Energía, resulting in “persecution, intimidation, and co-option of community leaders. There have been assassinations, imprisonment; there is fear and terror.”

The statement alleged: “The sad and terrifying story of Chixoy is related to the current persecution … through international financial institutions”, the World Bank and the Inter-American Development Bank.  In 2008 the IFC provided $20 million in loans and invested $9.9 million in equity in Corporación Interamericana para el Financiamiento de Infraestructura (CIFI), “a nonbank financial institution that funds small and midsize infrastructure projects in Latin America and the Caribbean”. CIFI in turn invested in Hidro Santa Cruz and the Cambalam project in 2010, with “a long term loan of up to $8.2 million, and a mezzanine facility of up to $2.5 million.” The NGO statement included a call for: “The governments of Europe, Canada and Latin America to investigate and make a public statement against the improper use given to funds provided by the World Bank and Inter-American Development Bank.”

In early February, NGOs opposing the Inga hydropower developments in the Democratic Republic of Congo (DRC) celebrated as a heavily criticised Bank proposal for technical assistance to the Inga 3 project (see Observer Autumn 2013, Update 86, 81) was removed from the Bank board’s calendar only days before approval was scheduled to take place. However, the victory was short lived as unconfirmed information emerged that a deal has instead been struck between the IFC and an unnamed Chinese company as a private investor. According to Peter Bosshard, policy director of US-based NGO International Rivers “the IFC deal was arranged by the heads of the World Bank, IFC and USAID behind the scenes, without any accountability to the DRC parliament, the World Bank’s board of directors and civil society. Handing the project over to a private investor will make it even less likely the country’s poor people would benefit from the project.” Prior to the expected board approval, 12 DRC NGOs, including Centre National d’Appui au Développement et à la Participation Populaire, wrote to the Bank’s board members, questioning the project’s focus on “supplying power for export and promoting industrial and mining development” and asked for the energy needs of the DRC population to be prioritised: “Sadly, we the Congolese continue to ask whom this energy is for?”

In August 2013 the Bank signed a $340 million deal with Rwanda, Tanzania and Burundi for the cross border 80 MW Rusumo hydroelectric project, scheduled to commence in 2014. However, concerns have been raised over the development impacts of the project, including over the location in an area prone to drought and that it is likely to primarily power the mining industry (see Update 61). In December, Niger secured $172 million from the Bank and other funders to finance the 130 MW Kandadji hydroelectric project. According to a 2011 report by the International Union for Conservation of Nature, the dam would displace 38,000 people. Samuel Nguiffo, coordinator of the Cameroon-based NGO Centre for the Environment and Development, told news agency Thomson Reuters Foundation “communities along the project area have to sacrifice their land and livelihood for little or no benefits.”

In January, the Bank agreed to provide over half of the funding for the $1.4 billion first stage of Pakistan’s Dasu hydropower project located on the Indus River. The final project estimated at $7 billion is expected to generate 4,320 MW. According to the Bank’s assessments of the project, 767 households from 34 villages will require relocation. Furthermore, “potential cultural and social conflict” is expected between the local residents and the vast number of migrant labourers required during the construction phase. Moreover, the environmental assessment concluded that due to climate change “glaciers in the Himalaya and Karakorum [mountains] are receding faster than happens in any other part of the world”, confirming that “most of the water of the Indus River originates from glacial melt”. Also in Pakistan, the IFC is due to approve equity investment of up to $125 million for China Three Gorges South Asia Investment Limited in March. The company’s prospective activities include the development and operation of two hydropower projects, the 720 MW Karot and the 1,100 MW Kohala projects.

The Bank is considering a $70 million loan for the planned Lukovo Pole dam in Macedonia’s Mavrovo National Park. Furthermore, the European Bank for Reconstruction and Development (EBRD) has committed €65 million for the Boshkov Most dam in the same park. In a January open letter to the World Bank president Jim Yong Kim and the EBRD president Suma Chakrabarti, 119 scientists from around the world urged them to “reconsider your institutions’ position to fund these projects”. According to the scientists: “Not only are these projects threatening specific habitats that this national park provides for many endangered species, they also undermine the very idea of national parks in general [and] violate EU law. … We are surprised that your institutions have even considered supporting these dam projects.” A late January Bank statement clarified that “no decisions have been taken at this point”, and that “all national, EU, and World Bank standards for due diligence will be met … when a detailed design proposal is ready.”

Despite the Bank’s continued promotion of hydropower, its own research has raised concerns about its viability. In December the Bank completed a $450 million “weather and oil price insurance” agreement for the Uruguay state-owned hydropower company. The transaction will insure the company for the next 18 months “against drought and high oil prices, both of which have had negative financial impacts on the company in the past.” According to the Bank’s press release the “size of the contract is large because the financial risk is significant”, noting that in 2012 “the costs of supplying demand for electricity reached a record of $1.4 billion, far exceeding the company’s original projections of $953 million” due to water shortages.

In January, the Bank launched a new initiative on “thirsty energy”, to “help developing countries better plan and manage scaling-up energy capacity to meet rising demand, in tandem with water resource management”. Rachel Kyte, the Bank’s vice president and special envoy for climate change, said: “With demand rising for both resources and increasing challenges from climate change, water scarcity can threaten the long-term viability of energy projects and hinder development.”

The initiative follows a June 2013 Bank report with the same name which outlined several problems with hydropower, including that hydropower plants can alter “the timing and flow of the water. This impounded water affects water quality and aquatic life”. Furthermore: “A changing climate and increasing water variability will also affect hydropower as flows shift due to changing precipitation. In addition, glaciers that feed hydropower plants may disappear, thus jeopardising the ability of nations to generate power” noting: “Glacier retreat has already affected the output of hydropower plants in areas of Bolivia and Peru.” It also referenced a 2010 study by US-based NGO World Resources Institute assessing “existing and planned power plants in India and southeast Asia”, which concluded that “over half are located in areas that will likely face water shortages in the future.” In contrast, the report concluded that “wind (which requires virtually no water) and photovoltaic (which requires a small quantity of water to wash the panels) have negligible impacts on the water and energy nexus.”

Letter from DRC NGOs to the World Bank on Inga 3

Getting its hands dirty