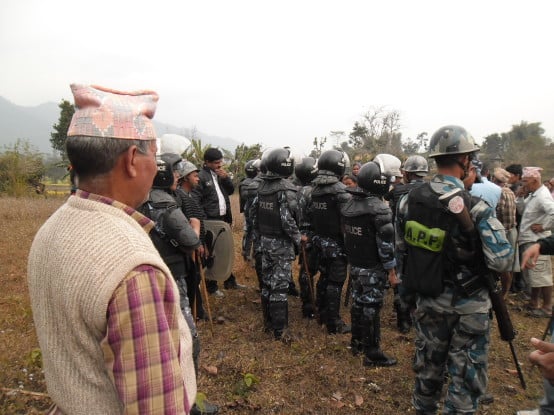 by Shankar Limbu and Komala Ramachandra

Nepal’s highest capacity electricity transmission line, a 220 kV line extending 75 kilometres between Khimti and Dhalkebar substations, has faced numerous setbacks since the project commenced in 2002. As one component of the World Bank-funded Nepal Power Development Project, the Nepal Electricity Authority (NEA) is building the power line, ostensibly under the supervision of the Bank, though the Bank’s role was hardly evident until affected communities began voicing concerns about failures in the planning and implementation of the project and the resulting harm.

The affected residents of Sindhuli District are angered by a lack of project information and consultation about the impacts of the high capacity power line, disregard for the rights of affected indigenous communities, and inadequate compensation for land acquired for the power line’s right of way, which extends 15 metres on either side of the wires. They first filed a petition to the Supreme Court of Nepal in February 2013, and then in July to the World Bank’s accountability mechanism, the Inspection Panel (IP, see Observer Winter 2014). People have not received clear information about what activities are permitted under and near the power lines, but are concerned that their agriculture-based livelihoods will be curtailed. Furthermore, commercial banks are refusing to mortgage any land under the right of way. Residents have requested that the NEA and World Bank consider alternatives that would divert the power line away from inhabited areas, particularly homes, schools, and heavily travelled roads, as recommended under the Bank’s own environmental, health, and safety guidelines.

The Bank’s response has been ineffective in addressing peoples’ concerns.  Until February, there had been virtually no direct communication from the NEA or the Bank to affected communities, despite the communities’ primary demand for clear information and participatory consultation. Long promised communication materials, including “Frequently Asked Questions” and informational signboards along the power line, have yet to materialise, despite public statements from NEA officials that the project will be completed in a few months. Bank and NEA officials have repeatedly dismissed concerns about health and long-term economic impacts of the power line, instead redirecting the conversation to monetary compensation and ignoring community requests to find a mutually acceptable alternative. Bank officials have limited “affected people” to those who own land in the 15-metre right of way, attempting to exclude the participation of people who live in the region, including those with children who attend schools near the power lines. The NEA has also attempted to exclude participation of a community based committee that represents the interests of affected people and is fighting against the project, claiming that they are unauthorised to engage in official communication.

Despite ongoing intimidation and death threats from local and district officials ... affected communities continue their protestsShankar Limbu and Komala Ramachandra In October 2013, the IP recommended a full investigation of the project. However, it first allowed the Bank at least six months to implement an action plan that Bank management and the NEA had developed to remedy problems, including information dissemination, consultation, updated resettlement and vulnerable peoples action plans and compensation – all elements that should have been in place from the outset. The loan under which the power line is funded closed in December 2013, as did official Bank supervision. Bank management offered to extend their supervisory role during implementation of the action plan, but communicated that failure to accept the plan would result in Bank withdrawal from the project and the government of Nepal forcibly acquiring land to complete construction on the power line. Affected people had little choice but to go along, and though they requested a simultaneous investigation by the IP, the Panel delayed its start until after April.

Implementation of the action plan has been woefully delayed, lacking even communication about its existence to the affected people. Affected communities have been protesting the project, not allowing NEA staff to enter the region and commence work, demanding that information be disseminated and consultations be conducted first. Issues came to a head in late January, when an unannounced NEA team escorted by heavily armed security forces entered an affected community. This is the same site where security forces had brutally beaten women protesters in 2012 when they attempted to prevent an NEA team from conducting survey work, leaving two women hospitalised. Despite ongoing intimidation and death threats from local and district officials, the same officials who are responsible for distributing information about the project, affected communities continue their protests, most recently holding a multiday sit-in in after security forces entered the communities. Bank officials have yet to provide communities with a commitment that security forces will not be used during project implementation.

Affected communities have suffered violence and intimidation and have had to wait far too long for clear information and consultation about the project. Prevention of further harm from both this power line and similar future projects requires an immediate IP investigation and action by Bank management.