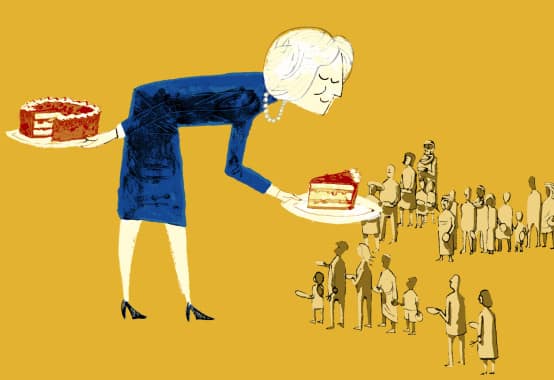 In February and March the IMF published two papers on inequality, addressing its impact upon growth and the implications for government spending. The papers generated international debate and led to suggestions that the IMF is changing its historic approach to macroeconomics, rejecting cuts to public spending with which it has long been associated. However, the Fund has not examined its own policies’ role in creating inequality, nor has it sought to explore changes to the conditionalities it currently imposes on borrowing countries.

In a widely reported February speech, Fund managing director Christine Lagarde argued that “rising inequality and economic exclusion can have pernicious effects”, adding that no longer can policy “look simply at economic growth” and must instead “ask if this growth is inclusive”. Media reports and NGO statements celebrating this stance appear to be contradicted by the IMF reports’ small print, which indicated that little will change with the Fund’s policies.

A February IMF staff discussion note (SDN) found that advanced economies reduced inequality by roughly one-third between 1960 and 2010 by combining social transfers with redistributive taxes. The paper found that lower net inequality is “robustly correlated with faster and more durable growth” and that income redistribution appears “generally benign” in terms of its impact on growth. The authors consistently highlighted that in “extreme” cases it “may” have “negative effects on growth”. Redistribution has been discouraged in the past by the IMF due to the belief that it would impede growth.

The SDN recommended four considerations in ensuring redistribution could be efficient and effective. These were to ensure redistribution is consistent with macroeconomic stability objectives; that taxes and expenditure policies be evaluated jointly; that policy design balances redistribution and efficiency; and that all policies take into account administrative capacity. It found that “effects of redistribution … are on average pro-growth”. IMF conditionalities on borrower countries, requiring policies which exacerbated inequality and disproportionately harmed poorer and lower income groups, were historically justified as growth friendly. The paper acknowledges, without referencing the IMF’s role, that this stance is not valid based on its results and review of the prevailing literature, concluding that “we should be careful not to assume that there is a big trade-off between redistribution and growth. The best available macroeconomic data do not support that conclusion.” They find that “evidence for the growth-destroying effects of … redistribution” is “surprisingly little”. Nevertheless, the authors are “mindful about over-interpreting these results, especially for policy purposes”.

Aldo Caliari, of US-based NGO Center of Concern, pointed out in a February blog post that the Fund’s paper was little more than an “instrumental” case for reducing income inequality, justifying redistribution only in terms of what is beneficial for growth and development. He noted that though leaders as diverse as US president Barack Obama, Lagarde and the Pope seem to be “in agreement about the problem” they still need to “throw their weight behind the solutions”. International NGO Oxfam concluded in a January study that inequality also poses social and political risks, arguing that “institutions become undermined and governments overwhelmingly serve the interests of economic elites to the detriment of ordinary people”, such that inequality “erodes the social contract between citizens and the state” (see Bulletin Feb 2014).

The IMF has made no indication that this paper will change its policies. The Fund’s first deputy managing director David Lipton commented in a March IMF Survey article that for redistribution, “[policy] design matters”, otherwise it can be “pushed too far” and is “distortive”.

The SDN’s caveats were deemed irrelevant by some World Bank staff. A March blog post (one of several similar Bank blogs) by Jean-Pierre Chauffour, lead Bank country economist for Morocco and former IMF staffer, questioned whether the IMF paper’s view on tackling inequality would be “smart economics”. He suggested that the paper confused the causality of growth as being driven by reduced inequality, suggesting that growth leads to less inequality, making redistributive policies a “pale palliative”. Hence policies which directly address inequality should be avoided, despite the SDN’s review of the overall evidence. Chauffour dismissed this and the extensive literature it documents, arguing that “for the World Bank, the lesson would be that accelerated economic growth – not redistribution” remains the best way to “eliminate extreme poverty” and boost “shared prosperity”. Chauffour takes a swipe at the paper’s “methodological shortcuts”, speculating that debt-financed redistribution caused the global slowdown in growth and warning that this paper’s conclusions should not “derail … sustained accelerated economic growth” policies.

“Bringing redistribution to the IMF discourse is welcome” commented Isabel Ortiz, of the International Labour Organisation, “however it needs to be translated into policy advice; currently there is a disconnect between the IMF’s progressive research pieces in headquarters and operations and surveillance in countries. Tackling inequalities through inclusive policies, from progressive taxation to social protection floors, is at the core of the United Nations development agenda, now also evidenced by IMF research, therefore IMF country policy advice should not remain ‘business as usual’.”

It appears doubtful that IMF policy advice will change as a result. Speaking to news agency Bloomberg in March, Nicolas Mombrial of Oxfam argued that the Fund’s policy paper should trigger a “long-term change in IMF policy advice to countries” in favour of investment in “health and education and more progressive fiscal policies”. However, SDN lead author Jonathan Ostry stated in a press conference to launch the report that “I want to draw a line between this analytical paper and Fund policy advice and design of programmes … there’s no direct implication for Fund policy advice or programme design.”

The February SDN was followed by a policy paper in March examining the role of fiscal tools to reduce inequality. The paper focused on how to better target social spending and considered alternatives to large cuts in welfare transfers, which have been the primary mechanisms for fiscal management that the IMF has advocated in both historic and current lending programmes.

Lost on most commentators was that the paper and its findings were prevented from being approved by the board. A front page disclaimer declared that “the executive directors met in an informal session, and no decisions were taken”. This unusual non-approved status for a policy paper suggests that major member states would not have approved it for publication. The Fund’s supposed change of heart favouring redistributive policies is therefore even more questionable.

The policy mix set out by this quasi-official policy paper rarely deviates from long-standing Fund positions, such as championing means-testing, and ignores the political challenges facing governments to ensure redistributive policies are democratically embraced. Though the Fund generated positive headlines which implied a significant change of approach, Peter Bakvis of the International Trade Union Confederation argued in March that the paper “is very guarded in its policy proposals” and that the paper ignored “any underlying causes of inequality”, including weakened labour market institutions and financial deregulation, and “breezily dismisses employment protection regulations”. Bakvis concluded that the paper will “have to do further work if it is to develop serious and actionable policy proposals against inequality”.

In a February paper, the Arab NGO Network for Development examined the IMF’s policies on subsidy reform in the Middle East region. They concluded that rather than seeking to reduce inequality, an economic model based on fiscal consolidation and privatisation has been advocated by the Fund in countries as diverse as Jordan, Tunisia, Morocco Egypt and Yemen. They noted that the IMF’s approach is based explicitly on familiar policies of encouraging “private sector-led growth” and “stringent fiscal austerity measures” including removing food and energy subsidies, whose cost would be borne most by vulnerable groups. Examining IMF recommendations since 2007 they found that the IMF has “intensified its calls for the reduction of food and, in particular, fuel subsidies” in the region despite surveys which found that local populations were “overwhelmingly opposed [to] the reduction of food subsidies” and “large majorities favoured … redistributing funds to the poor and to public services, namely education and healthcare services”.

Jihen Chandoul, of Tunisian NGO l’Observatoire de l’économie, confirmed that “the IMF’s stand-by agreement with Tunisia was conditional on compliance with a harsh package of regressive policies such as elimination or reduction of subsidies, wage bill caps, pension and healthcare reform.”