Before the last home is torched

No to Redd in Africa

Illegal and forceful evictions of the Sengwer indigenous people from their ancestral lands in the Cherangany Hills, Kenya 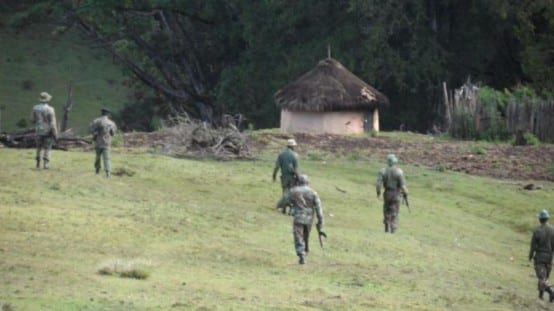 The World Bank’s funding of a forestry project in East Kenya that has evicted over a thousand Sengwer families from their homes in the Embobut Forest (see Observer Winter 2014) continues to receive global attention. By late March almost 950,000 people had signed an Avaaz online petition calling for the Bank to “urgently” halt the “illegal” evictions. Avaaz suggested that recent US legislation mandating US opposition to IFI forestry projects (see Observer Winter 2014) represented an opportunity for future campaigns.

Under the spotlight of international condemnation, the Bank issued a mid February statement saying it was “alarmed by reports of the recent evictions”, adding: “The World Bank is not involved in the reported evictions, nor has the Bank financed or supported these actions. Nevertheless, we are not bystanders”.  The Bank emphasised that it “stands ready to assist the government of Kenya with its development advice drawing on its local and global project experiences, and to share best practices in resettlement in line with its safeguard policies. These seek to improve or restore the living standards of people affected by involuntary resettlement.”

In a mid March letter to the Kenyan government and the United Nations over 360 national and international civil society organisations and individuals led by the No to REDD in Africa Network said the Bank’s offer of advice to the Kenyan government, demonstrated it was “admitting its complicity in the forced relocation of the Sengwer people as well as offering to collude with the Kenyan government to cover-up cultural genocide”. It continued, “Claims of being able to restore and improve the living standards of evicted people such as the Sengwer are crude, paternalistic, colonial in nature and above all smack of sheer arrogance on the World Bank’s part.” Sengwer spokesman Yator Kiptum berated the forcible evictions and burning of homes by the Kenya Forest Service and Administration Police, a paramilitary unit of the police, as a “disaster”. He said, “The government of Kenya is forcing us into extinction.”

The Bank’s response demonstrated it was "admitting its complicity in the forced relocation of the Sengwer People as well as offering to collude with the Kenyan government to cover-up cultural genocide”.No to REDD in Africa network

The Bank’s accountability mechanism, the Inspection Panel (IP), is expected to produce its investigation report into the case by the first quarter of 2014, but by late March this had not yet been published. The Bank has been accused of breaching international human rights standards over the resettlement of communities in Badia East, one of nine Lagos settlements intended to benefit from the Bank-funded Lagos Metropolitan Development and Governance Project (LMDGP) in Nigeria (see Observer Winter 2014, Bulletin Dec 13). In a late March statement NGO Amnesty International called the Resettlement Action Plan (RAP), finally published on the Bank’s website in February, “deeply flawed”. It is concerned that the RAP, signed off by the Bank “facilitates further human rights violations including the violation of the right to adequate housing” and was finalised “in the absence of genuine consultation with affected people”, which, Amnesty says, among other issues, “has resulted in around 350 affected people being excluded from the list of beneficiaries.” Amnesty condemned the compensation amount offered by the Lagos state government as “insufficient for finding adequate alternative housing in Lagos state and leaves victims of the Badia East forced eviction little choice but to find housing in other informal settlements thereby risking the possibility of another forced eviction.”

The case is being handled by the IP under a new pilot scheme. In a March interim note the IP reported that although an agreement has been reached on compensation “some practical issues remain” over implementation.

US boost to Cambodian lake community

There was more hope for the Boeung Kak Lake community in Phnom Penh, capital of Cambodia, battling evictions connected to a Bank land management and administration project, which has contributed to the displacement of over 4,000 families since 2007 (see Update 81, 75). In late January new US legislation directing the US executive director to the World Bank to regularly update Congress on remedial action for the Boeung Kak families (see Observer Winter 2014), prompted the community to defy a ban on public gatherings to deliver a thank you letter via the US embassy in Phnom Penh.

Ee Sarom of NGO Sahmakum Teang Tnaut said: “We are hopeful that now that the US Congress has weighed in, the Bank will do what it promised four years ago.” However, as of early March only 17 families that had previously been excluded from an onsite housing deal, which the government offered to the remaining families at the lake after the World Bank froze new loans to Cambodia, had reportedly been given land titles. Eang Vuthy, of Equitable Cambodia, said: “The Bank should start by working with Phnom Penh City Hall to conduct a social needs assessment of the displaced Boeung Kak families and put in place a rehabilitation program for them to get back on their feet.  It should also work with the government and UN Habitat to secure the property rights of all remaining families and help them upgrade their housing and infrastructure so that they can live in dignity, without fear of eviction in the future.”

Before the last home is torched

No to Redd in Africa

Illegal and forceful evictions of the Sengwer indigenous people from their ancestral lands in the Cherangany Hills, Kenya