Putting A Price on Carbon: Nations Opt For Market-Based Solutions

The Weakest Link: Problems and Perils of Linking Carbon Markets

Why the World Bank is Taking on Climate Change

World Bank Group President: This Is the Year of Climate Action

The role of the World Bank in carbon markets 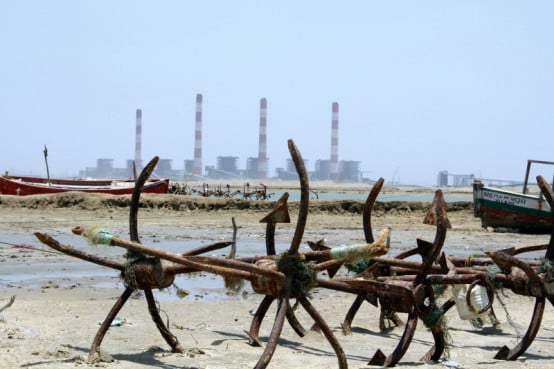 Fishing under the shadow of coal plants in Mundra, India (Joe Athialy)

Since becoming president of the World Bank in 2012 Jim Yong Kim has pushed climate change to the top of the institution’s agenda (see Update 83), but critics say the Bank’s proposed solutions do not match the new rhetoric.

On countless occasions he has added his personal voice to urge immediate action. In September 2013 Kim said: “we know that climate change, left unchecked, threatens the health, homes, and livelihoods of millions of people around the globe, with the poorest and most vulnerable hit the hardest.” His warnings of the consequences of climate change are based on a series of Bank reports, including the 2012 landmark report Turn down the heat which warned the planet could warm by 4 degrees by 2100. The report predicted this could lead to more violent storms, forest fires and drought leading to increased hunger and disease. The Bank has also released regional reports with specific scenarios for Sub-Saharan Africa and South Asia (see Update 86).

Towards the end of 2013 the Bank published several reports on short-term climate pollutants from burning wood for cooking stoves, known as ‘black carbon’, methane from solid waste, as well as fluorinated gases known as HFCs. The reports argued that it is crucial to reduce these emissions because they are melting glaciers and snow cover in regions such as the Himalayas. Doing so would also reduce deaths from indoor and outdoor air pollution. The Bank reports noted, “4 million people die annually from cookstove pollution, greater than the annual toll of HIV/AIDS, malaria, and tuberculosis combined”. In March Kim said the science on climate change was clear given that “97 per cent of scientists agree that man-made climate change is a reality”.

The Bank’s heavily publicised July 2013 announcement that it would only fund coal projects in “rare circumstances”, such as when countries lacked feasible alternatives or financing to meet their basic energy needs, reinforced its public image as a leader in tackling climate change (see Observer Autumn 2013). At the World Economic Forum in January, Kim said “this is the year to take action on climate change” and that “now is the time to act for future generations before it is too late”.

However, the Bank Group is still funding new coal projects, including approving International Finance Corporation (IFC, the Bank’s private sector arm) funding in February for an integrated board and pulp mill project in China run by Finnish multinational Stora Enso. The mill will include a 50 MW power boiler which will burn coal as well as biomass. Around 80 per cent of the mill’s energy will be derived from coal in the first three years of the project. In line with new national policy (see Observer Winter 2014), the US executive director to the Bank voted against the investment, but the project was still approved.

The Bank is still deciding whether to finance a controversial coal plant in Kosovo and continues to fund coal projects in India and Indonesia (see Bulletin Dec 2013). In the case of the Tata Mundra coal plant in India, which received IFC funding, local fisherwomen launched a petition in March calling on Kim to withdraw funding for the project which emits coal dust that falls on “fish out in the sun for drying, [which] makes it toxic and non-marketable” and “affects the health of our children, the elderly and even animals”.

The Bank is also strongly backing natural gas projects with its position being that it can play a key role as a “transition fuel”. Previous Bank funding for gas projects, in countries such as Nigeria and Kazakhstan, has been criticised for its damaging environmental impact and not increasing energy access for local communities (see Observer Autumn 2013).

Sunita Dubey of Indian NGO Vasudha Foundation questions if the Bank will put their money where their mouth is to match the rhetoric of desired climate action. “The Bank is known for funding huge projects, and believes in trickle down benefits. So the question is whether the Bank has, or can develop, the institutional, financial and technical expertise to implement the low-cost, low-carbon decentralised energy systems that benefit poor people.”

Despite a history of displacing communities and flooding fragile ecosystems, the Bank believes large hydropower projects are an effective way to increase energy access without carbon emissions. In March the Bank approved funding related to the controversial Inga 3 dam project in the Democratic Republic of Congo (see Bulletin Feb 2014). A March academic study has found large dams often are neither cost efficient nor carbon neutral. Continue reading

Putting a price on carbon

One of the main policies advocated by the Bank to deal with climate change is placing a price on greenhouse gas emissions which according to a March Bank blog is “a cost-effective and efficient means to drive down greenhouse gas emissions as the cost of such pollution goes up.” On taking up her role as the Bank’s new special envoy on climate change in January, Rachel Kyte wrote “a predictable, robust price on carbon gives companies an incentive to invest in low-carbon energy sources”.

The Bank continues to promote carbon markets as one of the best mechanisms to price carbon (see Update 85, 81). The Bank’s promotion includes the Forest Carbon Partnership Facility, BioCarbon Fund (see Observer Winter 2014), Carbon Initiative for Development, and the Partnership for Market Readiness (PMR, see Update 85). The PMR was setup in 2010 to “help developing countries launch carbon markets that cap emissions and allow companies to trade permits in an attempt to build a global trading scheme.” Around $110 million has been committed and $22.6 million allocated in grant funding. At its latest meeting in early March countries, including Mexico and Singapore, presented their latest plans. In a January blog Kyte noted over 30 countries “have or are planning to launch carbon markets in coming years”.

The Bank did not release its annual report on the state of carbon markets in 2013 saying “current market conditions invalidate any attempt and interest to undertake such analysis”. Instead it worked with the Dutch energy consultancy firm Ecofys on mapping carbon pricing initiatives which acknowledges “prices in the major existing carbon markets are at a historic low”. Meanwhile “regional, national and sub-national carbon pricing initiatives are proliferating”, and “national and regional trading schemes are starting to link up”.

Civil society organisations have repeatedly criticised carbon markets, arguing they are a profit-oriented distraction from taking concrete action to reduce emissions at their source (see Update 79, 59). In a March briefing US NGO Food and Water Watch said “carbon markets are not about emissions reductions – they are about finding the cheapest way to keep on polluting”. On the idea of a global carbon market the briefing concluded: “linking carbon markets serves only economic interests, not public or environmental interests. It puts profits over people, and it is not a legitimate solution to emissions reductions.”

In a declaration published before the UN climate change negotiations in Poland in November 2013 over 140 organisations and social movements, including Carbon Trade Watch and Via Campesina, stated “carbon markets have demonstrated an absolute inability to start reducing greenhouse gases at source, or promote a just transition away from fossil fuels, both necessary to reduce the impacts of climate change.”

Putting A Price on Carbon: Nations Opt For Market-Based Solutions

The Weakest Link: Problems and Perils of Linking Carbon Markets

Why the World Bank is Taking on Climate Change

World Bank Group President: This Is the Year of Climate Action

The role of the World Bank in carbon markets