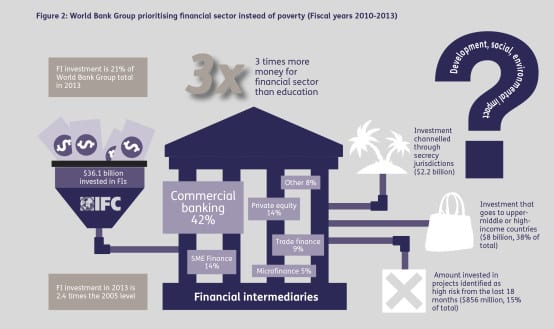 This post by Peter Chowla of the Bretton Woods Project was first published by Oxfam’s From Poverty to Power blog on 11 April 2014, launching the Project’s new report, Follow the Money: The World Bank Group and the use of financial intermediaries

‘Banksters’ have become famous since the financial crisis just five years ago. Media portrayals of New York’s ‘Wall Street’ or the ‘City’ in London have frequently villified bankers. Though Occupy Wall Street was broken up by the police, in popular consciousness distrust of the financial sector remains. In academic and policy circles the failure to predict the crisis or properly regulate the sector triggered soul-searching and much new thinking.

Yet somehow the development sector seems strangely immune to this. If anything, in the last half decade, development policy wonks and officials have tried to sidle up to the financial sector more than they have tried to distance themselves from the profit-obsessed and short-termist culture of finance.

At this week’s World Bank spring meetings, Bank president Dr Jim Yong Kim is presiding over a massive change in strategy for what remains one of the most influential development institutions in the world. Kim, an NGO-founding medical doctor, is a friendly face for the Bank after a succession of investment bankers and war hawks at the helm. He even once protested in front of the Bank. Yet nearly two years into the job, one of the Bank’s most important shifts under Kim has been towards bankers and not away from them. The financial sector is now the largest beneficiary of World Bank Group (WBG) investment.

Let’s put this into context. Investments by the Bank’s private sector arm (the IFC) in trade finance and other financial intermediaries were 62% of the total in the last fiscal year, amounting to $36.1 billion for the last four years. Over the same period the World Bank’s public sector arms (IBRD and IDA) committed $22.1 billion to health and $12.4 billion to education. That’s right – investments in the financial sector were about three times those in education and about 50% greater than those in health. On top of this, the IFC’s portfolio of financial sector investments shows funding was concentrated in commercial banking and upper-middle income countries, Russia being the largest single country destination, with little evidence of the claimed development impact. There are serious questions about what kind of development you might get from investing in the financial sector. There are no examples of countries that have successfully promoted prosperity and equity by bolstering the power of the financial sector without first having a coherent national development strategy and industrial policy. Success stories, such as Korea, Taiwan and China, relied on a heavily regulated domestic financial sector that supported industry. The IFC doesn’t seem to have this in mind, but instead prioritises “financial deepening” and “financial inclusion”, terms as fuzzy as any development jargon. Oxfam’s research on inequality has clearly highlighted the risk to the public interest from powerful elites that capture institutional processes. Is turbo charging the financial sector, infamous for regulatory capture even in supposedly mature democracies, the best strategy for eliminating global poverty?

It’s not just the IFC. An increasing number of public institutions are channelling money into the financial sector. The new Green Climate Fund plans to do this. The G20 is involved too. But there are large risks to the environment, communities, and overall development efforts. Global Witness’ exposé of land grabs by Vietnamese rubber plantations in Cambodia financed by the IFC through a private equity fund is just one example. Other cases in India, Honduras, Guatemala, and Uganda demonstrate the negative impacts and lack of accountability of this approach.

Having a more powerful, but short-term-profit-oriented, financial sector seems more likely to heighten risks while skewing incentives away from the sort of longer-term investments needed to sustainably diversify economies and reduce poverty.

While our elite international institutions seem clear where they are going, civil society organisations have not yet fully grasped the changing nature of cross-border finance, nor come up with a coherent response to financialisation. Our report is a tool to trigger debate about to get us asking the right questions and to see how we can develop joint strategies that fully engage with this trend.

We identify three possible approaches civil society could take: asking for stronger rules and transparency; investing in ‘better’ private financial institutions; or throwing it all out the window and demanding public (not private) sector finance. These approaches are not easy to reconcile and will turn on fundamental questions about the pro-poor role of private finance in a fair, sustainable and prosperous economy.

Big NGOs tend to ask for stronger rules. These are amenable to campaign plans, log frames, and emails to supporters that can identify successes and claim victory. On the other hand, many believe business can be used to fight poverty but that we should seek out different kinds of businesses, such as cooperatives, social enterprises and other socially oriented institutions to deliver finance. Neither of those approaches is easily scalable, but both have their appeal.

There are still others who conclude that the hurdles to the private financial sector serving as development agents are just too great. They call for a new generation of public financial institutions, which, along with international public financial support from the likes of the IFC, could seek to mobilise domestic private wealth to invest in accordance with public interest policies.

None of the approaches is suitable for every national context, but if civil society doesn’t get cracking on a coherent strategy, we might be stuck with powerful financial interests driving the agenda at the heart of every development initiative. Surely we learned the consequences of that five years ago?