Working for the many: Public services fight inequality 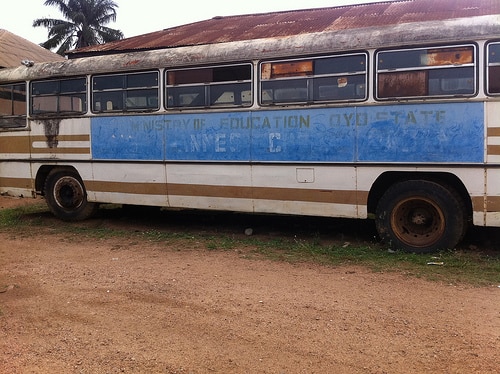 Both companies deliver a low-cost,  high-tech model, described by Bridge as “school in a box” based on “technology, scripted instruction, rigorous training, and data-driven oversight”, allowing them to charge fees of between $6 to $19 a month per pupil. Bridge sees a “massive market opportunity”, earning praise from the IFC leadership. In an April blog IFC chief executive Jin-Yong Cai described Bridge’s methods as a “massive learning laboratory for students and educators alike”. The IFC’s proposed  $25 million investment in Peruvian education company Proyectos Educativos Integrales del Peru is currently under consideration by the Bank’s board. Funding for private educational providers in India and Pakistan was provided in 2013 (see Bulletin Dec  2014, Update 86). Public schools serve the most disadvantaged segments of the population. The World Bank Group['s] ... push to stimulate growth of private sector schooling ...will ultimately hurt the poorest of the poor.”

Increased investment in private schools also means better returns for providers. Bridge’s biggest investors includethe UK’s CDC, formerly the Commonwealth Development Corporation, Bill Gates, as well as Silicon Valley companies and venture funds. Bridge does not publish its profits but is explicit about its expansion plans from its current 259 nursery and primary schools, aiming to educate “10,000,000 children across a dozen countries by 2025”. In April, magazine Inc.com rated Bridge 11th in its ‘25 companies that are changing the world’, celebrating Bridge’s ambition to “teach 10 million kids, end poverty, and make money doing it”.

Critics question the transformative powers of the model. In March Curtis Riep of the University of Calgary strongly critiqued Pearson, revealing “the monthly wage for an Omega School teacher ranges between 130 and 150 Ghanaian cedis (equivalent to $65 and $75 per month … ) – only 15 – 20 per cent of what teachers in the public sector make in Ghana”. Riep quoted Omega’s own founder Ken Donkoh’s admission that “We can‘t get experienced quality teachers in the schools so … we’ve …  hired experienced teachers to write out those lesson plans … so that our teachers can … just deliver them”. Riep, as have others, decries this “McDonaldisation” of education.  P. David Pearson of the Graduate School of Education at University of California (UC) Berkeley, commented on Bridge’s learning model: “in professional learning you don’t teach people to follow a script: You teach people a set of principles and practices that you want them to apply flexibly.”

Educationalists also challenge Bridge’s claim that their pupils outperform their peers in government schools, for example, by up to 205 per cent in reading fluency. Erin Murphy-Graham, also at UC Berkeley, notes in an April article that the 205 percent figure represents students on the lowest end of the performance spectrum who are reading roughly 25 words per minute, compared to the 15 words per minute read by students in government schools. “I wonder if these are statistically significant,” she wrote. “It looks like there might be some marginal improvement, but overall the scores are still very, very low.”

The Bank’s public support for private provision contradicts recent calls by IMF staff to “think about improving access to health and education” to combat inequality (see Observer Spring 2014). It has been quick to emphasise the “scalability” of the private model, which according to Bank staffer Harry Patrinos’s March blog, can be rolled out globally: “the private sector can scale up and make a difference for 57 million children out of school and the 250 million who cannot read”.  The January edition of the Bank’s Inequality in focus newsletter highlighted research from India showing that “parents with higher educational aspirations for their children are willing to pay more for their education”, whereas “parents who underestimate educational benefits are less likely to promote their children’s schooling” are described as “aspir[ing] to lower goals”.

However, the UK Department for International Development’s April literature review on the role and impact of private schools in developing countries, whilst making positive findings on the comparative quality of private education, found evidence that “financial constraints prevented children from poorer households enrolling in or continuing their attendance at private schools.” It also found evidence on “whether private schools complement state provision” to be “very thin”.

Civil society has vigorously attacked the IFC’s interpretation of the mass-education potential of private schools, instead pointing to the inequality that a two-tier system creates. Launching an April report on public services and inequality, Max Lawson of NGO Oxfam accused the Bank of “costly experiments in private provision that … exclude the poorest people”.  The report highlighted that the “virtual income” provided by public services reduces income inequality by an average of 20 per cent. Referencing UNESCO research it showed that for the poorest 20 per cent of families in Pakistan, sending all children to a private school would cost approximately 127 per cent of that household’s income. The report found that the real losers of user fee introduction amongst poorer families are girls, who still come lower down in many parents’ prioritisation of schooling access. Irfan Muzaffar, Pakistani education researcher and campaigner, commented: “Public schools serve the most disadvantaged segments of the population. The World Bank Group and other major bilateral donors should have been leveraging the government to improve public schools. Their push to stimulate growth of private sector schooling, especially when it is based on extremely scant evidence will ultimately hurt the poorest of the poor.”

In June the second replenishment of the Global Partnership for Education (GPE) for 2015-2018, a multilateral partnership of governments, donors, teachers, the private sector and civil society, will be determined.  At the April spring meetings Kim urged finance ministers to “step up and support the GPE”. However, campaigners, including UK NGO collaborative the Right to Education Project and global civil society movement Global Campaign for Education (GCE) are concerned about the Bank’s emphasis on private providers. Anjela Taneja of GCE commented:  “At a time when financing for education has consistently fallen short of what is required, it is a shame that already scarce resources are being diverted to fund mechanisms that have been proven to fail. The world has 127 million children who need to be brought into school – something that the private sector cannot achieve. Fundamentally, if we are to ensure that all children are in school and these schools deliver high quality education, the government school system needs to be strengthened.”

Reaching the poorest in Nigeria?

The Bank has invested heavily in transforming Nigeria’s education system which has some of the worst educational indicators in the world, including the highest number of children out of school. In early March it announced an extra $42 million through the International Development Association (IDA, its low income country arm) investment in Lagos’s secondary schools, the best performing in the country, whilst in April it approved a $70 million investment in 10 Nigerian universities, including two private institutions, as part of an “African centres of excellence” initiative. World Bank education manager for West & Central Africa, Peter Materu said the investment was much needed as “not a single university from this part of Africa features in rankings of the world’s top 500 universities.”

Working for the many: Public services fight inequality