Implement in haste, repent at leisure. FPP and FERN briefing calling for a rethink of the World Bank’s Carbon Fund

Palangka Raya Declaration on Deforestation and the Rights of Forest Peoples

To get ready for REDD+ 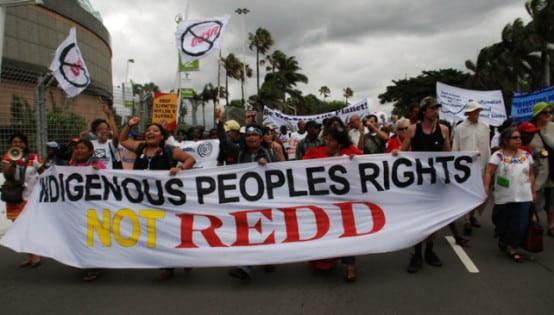 The World Bank continues to play a prominent role in promoting initiatives to reduce emissions from deforestation and forest degradation (REDD+), which it sees as a key policy in global efforts to tackle climate change despite repeated criticism by civil society groups. The March Palangka Raya declaration signed by Indonesia indigenous communities and international groups, including US-based Rainforest Action Network, criticised the World Bank along with UN-REDD for “promoting the take-over of our peoples’ land and territories through their support for imposed development schemes”. The signatories urged governments, international agencies and the international community to: “halt the production, trade and consumption of commodities derived from deforestation, land grabs and other violations of the rights of forest peoples” and “stop the invasion of forest peoples’ lands and forests by agribusiness, extractive industries, infrastructures, energy and green economy projects that deny our fundamental rights”.

In December 2013 the Forest Carbon Partnership Facility (FCPF) methodological framework was approved, releasing $390 million to be used for pilot REDD+ forest conservation projects in developing countries (see Observer Winter 2014). The FCPF is a trust fund housed at the Bank.

In early April the FCPF’s Carbon Fund, which pilots payments for verified emissions reductions from REDD+ programmes, provisionally approved the emission reductions programme idea note for the Democratic Republic of Congo (DRC). The approval means a REDD+ programme, covering millions of hectares of forests close to the DRC’s capital Kinshasa, will be part of the FCPF Carbon Fund’s pipeline. The DRC will now be able to access $650,000 to develop a final programme proposal that could be worth up to $60 million.

UK NGOs Forest Peoples Programme (FPP) and FERN criticised the approval in April, saying it “lacks a clear commitment to communities’ tenure rights, and is based on flawed deforestation assessments – which blame communities for forest destruction – and has defective plans for land use zoning, alternative livelihoods and actions to limit local subsistence activities.” They concluded: “unless major changes are made in FCPF planning, design and validation of emissions reduction programmes to ensure alignment with the FCPF charter and international human rights standards, the FCPF Carbon Fund risks enabling seriously flawed REDD+ pilots that could generate negative impacts on indigenous peoples and local communities as the FCPF moves towards implementation of activities on the ground.” Their 2011 reports on the FCPF criticised failing consultation processes and a ‘race to the bottom’ on safeguards (see Update 75).

Nepal’s proposal, covering around 1 million hectares of forests, was also accepted by the FCPF’s Carbon Fund in April for the preparation of a final programme proposal that could be worth up to $70 million. Indigenous peoples in Nepal have repeatedly called for meaningful consultation on REDD+ projects. Dinesh Kumar Ghale of the Lawyers’ Association for Human Rights of Nepalese Indigenous Peoples told Nepalese newspaper República in May, “we doubt the World Bank and its promoters are concerned about the rights of indigenous people who rely on the forests. Many also still live in the forests. We’ve been saying that the REDD scheme should ensure meaningful participation of indigenous people in the decision-making process and the management level of the REDD mechanism.”

The Bank also houses the Forest Investment Programme (FIP), a Climate Investment Fund (CIF) aimed at assisting countries to reach their goals under REDD+. The CIFs are financing instruments designed to pilot low-carbon and climate-resilient development through multilateral development banks. So far 11 FIP projects and programmes have been approved, totalling $197 million but just $8.5 million has been disbursed (see CIFs Monitor 9). Civil society groups have consistently protested against the lack of consultation for the $70 million FIP investment plan in Indonesia, endorsed in November 2012 (see CIFs Monitor 8). In a June letter over 50 Indonesian and international organisations wrote to the International Finance Corporation (IFC), the Bank’s private sector arm, to demand information on the investment plan – a request they have made for three years. The letter criticised the “lack of meaningful consultation or fulfilment of the principle of free, prior, informed consultation or consent” and the “violation of FIP safeguards which forbid FIP support for industrial logging” in reference to a proposed IFC project in an area of up to 700,000 hectares in West Papua, Sulawesi and East and West Kalimantan. The letter also questioned the Indonesian army’s role citing previous “documented cases of conflict and human rights violations in the forest sector which have had the involvement of armed forces.” The IFC’s role in the FIP was also criticised in a civil society letter to the IFC on its lessons learned process (see Observer Summer 2014).

In March US-based Rights and Resources Initiative (RRI) warned of an “unprecedented carbon grab, potentially worse than the ongoing ‘land grab’ as the UN and World Bank prepare for carbon trading under REDD+”. RRI research found that 23 low and middle income countries “REDD+ has not been a catalyst of tenure reforms” and “existing legal frameworks are uncertain and opaque with regard to carbon trading in general, but especially in terms of indigenous peoples’ and communities’ rights to engage with, and benefit from, the carbon trade.”

The Inspection Panel, the Bank’s accountability mechanism, continues to investigate the case of thousands of members of Sengwer indigenous communities who were evicted from a Bank-funded conservation area in the Embobut Forest by the Kenya Forest Service in January. The Panel’s report was expected in April, but has been inexplicably delayed. In February the Bank issued a statement denying all responsibility for the evictions (see Observer Spring 2014). The Sengwer communities continue to live in harsh conditions on the edges of the forest with insufficient food.

Implement in haste, repent at leisure. FPP and FERN briefing calling for a rethink of the World Bank’s Carbon Fund

Palangka Raya Declaration on Deforestation and the Rights of Forest Peoples

To get ready for REDD+