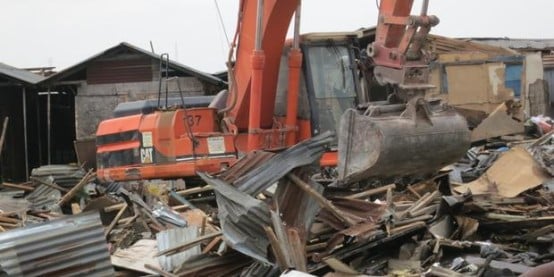 Some 9,000 evicted residents of a Lagos community have been denied justice by the World Bank's Inspection Panel as Amnesty International says the Bank is "complicit" in the process.

In July the World Bank’s accountability mechanism, the Inspection Panel (IP) decided not to register a complaint brought by the Social and Economic Rights Action Center (SERAC) a local civil society organisation, on behalf of some 9,000 evicted residents in Badia East, Lagos, Nigeria. The community is one of nine settlements intended to benefit from the Bank-funded Lagos Metropolitan Development and Governance project (see Observer Spring 2014, Winter 2014, Bulletin Dec 13). The case is now listed as completed on the IP website, despite widespread anger about the Bank’s role in the resettlement process. A mid-August report by NGO Amnesty International (AI) found that the the residents of Badia East whose homes were bulldozed in February 2013 (see Observer Winter 2014), were not adequately compensated by the government for their losses and that the World Bank was “complicit” in the process by wrongly endorsing a compensation process that was not consistent with international human rights standards or the Bank’s own policy.

According to the IP over 80 per cent of the inhabitants have been compensated and “some community representatives had expressed satisfaction and confirmed that most of the omitted affected people were included under the GRM (Grievance Redress Mechanism)”. However, two of the requesters of the original complaint have expressed their extreme discontent to the Inspection Panel about the level of financial assistance provided and the process used to develop the Resettlement Action Plan. Their position is backed by 41 other community members and AI. Ashfaq Khalfan of AI said the decision was “beyond disappointing – it is a slap in the face for the Badia East community who were forcibly evicted and left homeless for well over a year”.

The case had been considered by the Panel through a new pilot scheme, aimed at achieving early resolution of complaints (see Bulletin Dec 2013). However, Khalfan commented: “Based on this case, it seems that the World Bank Inspection Panel’s pilot scheme is little more than a public relations effort that allowed the Bank to wash its hands of its responsibility.” AI is urging the World Bank board of directors to call for an independent investigation to review how the IP has handled the complaint and a suspension of the application of the pilot until the investigation is completed and the pilot’s policy has been reviewed.