A major political move: the BRICS launch the New Development Bank and a reserve arrangement

The IMF in Egypt: revolution or coming full circle? 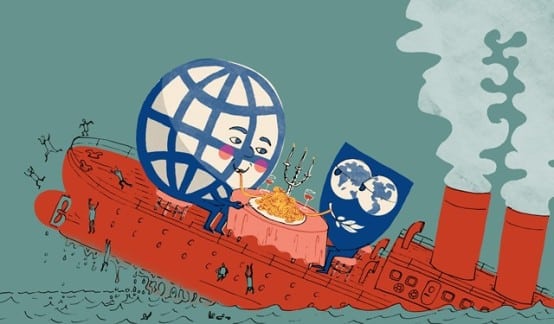 In July, the IMF and World Bank turned 70. Unlike previous anniversaries of their establishment at the Bretton Woods conference in 1944, this milestone passed with relatively little attention or criticism. This reduced interest is presumed by many commentators, supportive or critical, to reflect the waning leadership and even lost hegemony of the Bretton Woods institutions (BWIs). This perception has been emphasised by Brazil, Russia, India, China and South Africa’s (BRICS) launching of their own New Development Bank (NDB) in July, widely seen as a rival to the BWIs (see Bulletin Feb 2014). The BRICS also announced a Contingent Reserve Arrangement (CRA) explicitly designed to ensure they never again turn to the IMF for support. The CRA and NDB were announced just days before the 70th anniversary of the 1944 Bretton Woods conference.

Financial magazine Institutional Investor echoed typical received wisdom June article which suggested that the Bank “has taken a backseat to the IMF, which has orchestrated the response to the global financial crisis and Europe’s debt crisis … [the Bank] faces new rivals in the developing world”. The shift in economic activity toward ‘dynamic emerging economies’ and away from industrialised nations (particularly in Europe) has altered the landscape in which the BWIs operate. Yet, in different ways, the IMF and World Bank appear to be confronting the future reinvigorated and still influential.

The fundamental role and purpose of the Fund and Bank, and the economic system they help to underpin, has been questioned even within the most orthodox of forums. In a May speech Paul Volcker, former chairman of the US Federal Reserve, questioned whether the economic system of the last forty years had been effective. He argued that “the absence of an official, rules-based, cooperatively managed monetary system has not been a great success … international financial crises seem at least as frequent and more destructive in impeding economic stability and growth”. The IMF and World Bank have emphasised their commitment to governance change which seeks to respond to the long-standing criticism that their policies remain beholden to the political imperatives of their major stakeholders (see Update 83) rather than serving their economic and development mandates. Though the Bank has added a third executive director to represent African constituencies and the IMF has urged its members to push through reforms agreed in 2010 (see Update 85), significant concerns remain about the extent to which unrepresentative governance structures can enable “effective and legitimate” institutions (see Bulletin May 2014).

The BRICS nations eagerly anticipated NDB, widely referred to as the ‘BRICS bank’ is intended to finance “infrastructure and sustainable development projects”. In pointed contrast with the economic policy conditionalities associated with the World Bank’s and IMF’s lending, officials stressed repeatedly that the $50 billion in capital for the NDB will not fund a “bank of policies”. The governance of the NDB was also structured to contrast favourably with the World Bank where BRICS members have long demanded greater voice for themselves and other developing states. In particular, no single member will have a veto over the NDB’s decisions, unlike the effective veto which the US enjoys thanks to the size of its shareholding in the Fund and Bank. Similarly, the CRA was explicitly described as an ‘alternative’ to the IMF.

Despite the rhetoric, both the NDB and CRA expect involvement from the IMF and World Bank. The NDB is expected to leverage financing from other states and international development finance institutions, including the World Bank. The CRA will require that states needing more than 30 per cent of their borrowing limit submit to an IMF surveillance programme. The IMF’s scale, capacity and resources are considered essential to the CRA’s functioning and credibility.

Just as the BRICS’ new institutions appear not to signal the end of the Bank or Fund, the BWIs continue to impact significantly on people’s lives in countries across the world. Both institutions act as ‘gateways’ to additional funding from other bilateral and multilateral sources. This is evidenced in their engagement in north Africa, where in one example the prospect of a $4.9 billion IMF loan to Egypt last year would have released up to $19 billion of further investment from the World Bank, and other multi- and bi-lateral sources (see Update 83). Similarly, the IMF and World Bank have played a significant role in Burma (also known as Myanmar) through direct investment and coordination of others’ financing (see Observer Autumn 2014, Bulletin Feb 2014).

The World Bank retains the ability to set the development agenda by presenting itself as a “solutions bank” (see Observer Autumn 2013) and setting a standard which other institutions then copy or adapt. In July, the Bank released the first draft of its environmental and social safeguards policy as part of an ongoing consultation. The draft has alarmed civil society who fear that its reduced scope will reverse progress and have an impact on other institutions and beyond the Bank’s investments (see Observer Autumn 2014).

The international financial crisis reinvigorated the IMF’s role, leading the G20 to agree in 2010 to expand its New Arrangement to Borrow which dramatically increased the IMF’s resources and lending firepower (see Update 79). The IMF has signed 33 new agreements since 2010. Despite responding to demands that it reassess its longstanding policy recommendations on capital controls (see Update 86), tax and fiscal policy and even inequality, this ‘softening’ has so far been more rhetorical than substantial according to an August paper by Matias Vernengo and Kirsten Ford of the University of Utah. The IMF remains a familiar and influential actor in many poorer states via its role as a lender of last resort and its ongoing willingness to impose economic policy conditionalities (see Observer Autumn 2014).

In the strategy set out by Bank president Jim Kim, the Bank’s central role pioneering models of public-private partnerships (PPPs) and development financing via financial intermediaries has been championed by the G20 and taken up globally (see Observer Autumn 2014). This is despite concerns from civil society that over-reliance on financial intermediaries reduces development impact and accountability. Civil society groups also argue that PPPs have often been high risk, costly and failed to have the intended impact (see Observer Autumn 2014).

While the G20 has increasingly become the forum for determining the BWIs’ mandate and strategy, their influence remains significant in important multilateral forums, including UN-led processes, such as the establishment of Sustainable Development Goals and the Financing for Development conference. The G77 group of developing nations’ July declaration set out the need to address BWIs’ influence, urging that “the reform process of the governance structure of the Bretton Woods institutions be finalised … and be much more ambitious.”  The G77 called the IMF’s legitimacy “questionable”, accusing it of “imposing procyclical conditionalities” and demanded it  respect borrowers’ “need for adequate policy space”. The statement bemoaned the “lack of participation by developing countries” in policy-making and governance structures, and called for “comprehensive reform” of the BWIs, including enhanced voting powers to enable “greater equity … and to eliminate all types of conditionalities tied to aid”.

The Bank remains at the heart of discussions over how models of development should evolve, while the increase in IMF financing and proliferation of its lending programmes show that it is far from sunk. Rather than becoming irrelevant, the Fund and Bank occupy new terrain where BRICS and G77 states are competing with advanced economies to shape BWIs’ roles. Consequently, the BWIs are regaining influence despite a lack of progress in governance reform and stalled accountability.

A major political move: the BRICS launch the New Development Bank and a reserve arrangement

The IMF in Egypt: revolution or coming full circle?