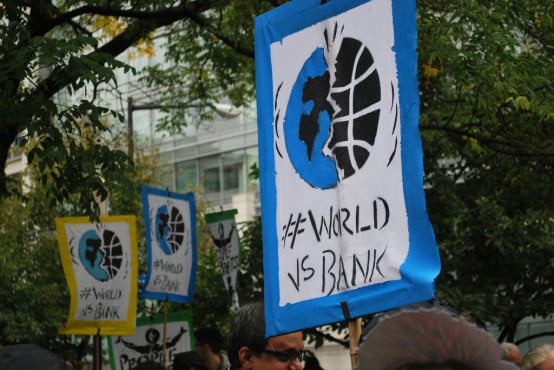 The World Bank and IMF annual meetings took place within the context of what both institutions termed a more cautious economic outlook and in the shadow of the July establishment of the BRICS’ (Brazil, Russia, India, China and South Africa) New Development Bank (NDB) and Contingent Reserve Arrangement (CRA).  While the IMF grapples with a “new mediocre” of global economic challenges, concerns multiplied about the World Bank’s seemingly never-ending restructure.

In an environment of slower than predicted economic growth and fiscal constraints, the annual meeting sessions and resulting communiqués gave particular prominence to the role of infrastructure finance as a potential antidote to the persistent economic malaise. The IMF appears to be in two minds as to whether to highlight its evolving positions on prioritising growth and jobs, which have been widely welcomed though not exactly followed through upon by the Fund, or to sound the alarm over rising debt levels, sluggish growth and risks of ‘profligacy’ (often code to justify more cuts, which have not exactly worked in the last four years). The solution the Fund and Bank have agreed upon is promoting investment with private actors and public backing, especially in infrastructure. The idea being that the short-term benefit of stimulus will pay for itself, and the long-term benefit will alleviate poverty and the infrastructure gap in poorer countries. However, the risks to the global economy seem only to be growing.

The focus on the well-documented global infrastructure deficit and establishment of the Global Infrastructure Facility (GIF) seems to set the stage for renewed interest in public-private partnerships as a driver of large-scale infrastructure projects, as reflected in the World Bank Strategy. The IMF Committee communiqué echoed these priorities, though the IMF itself has historically been rather sceptical of these approaches due to their frequent failure, leading to greater public debt and less successful infrastructure development.

Civil society expressed concerns before and during the annual meetings about the historical failure of large scale infrastructure projects to deliver on their proposed developmental outcome and poor social and environmental record. Concerns remain about the World Bank’s weak commitment to consultation and the adequacy of the mechanisms it uses to that end. The potential negative impact on indigenous populations and the environment of a return to mega infrastructure projects were consistent themes in civil society organisation (CSO) discussions with Bank staff and management. The adequacy of this approach was also questioned, in the light of the growing threat posed by rising indebtedness and sluggish growth in major global economies.

In relation to the Bank’s focus on private sector led growth and its strategy to support capital markets in developing countries, CSOs repeatedly expressed concerns about the growing prominence of the International Finance Corporation (IFC, the Bank’s private sector arm) within the WBG. This included continued concern about the IFC’s use of financial intermediaries (FIs), particularly in fragile and conflict-affected states. Concerns about the lack of demonstrable development impact of IFC investments and the potential for future ‘problem projects’, such as the Honduran palm oil company Dinant, were raised by some executive directors during discussions with CSOs.

Although the Dutch executive director mentioned during the CSO roundtable discussion, that the World Bank continues to emphasise that “there is no competition in poverty alleviation”, many CSOs present at the meetings suspect that the pressure of a changing geopolitical environment and increasing competition has, at least in part, driven the Bank’s approach to its proposed new social and environmental safeguards, which devolves substantial authority and responsibility to borrowers in the name of increased flexibility and more rapid disbursement. Participants in the safeguards consultation made their dissatisfaction plain by walking out of the event and joining an ongoing protest outside the Bank against the dilution of safeguards. The Bank’s new flexible approach, considered a dilution of the existing safeguards by many CSOs, has taken place in parallel to the BRICS bank stated commitment to avoid policy conditionality in its lending. The changes within the Bank, including its ongoing restructuring, must be seen in the context of the rise of more flexible competitors able to disburse loans quickly and with few strings attached.

In relation the evolving competitive pressures, the Dutch Executive Director noted at the CSO roundtable discussion that the Bank will be “very happy to share its expertise and best practices” with the NDB. The Bank continues its efforts to strengthen its role as the knowledge and solutions Bank, which makes the tensions within the Bank that result from the ongoing re-structure particularly relevant.

The town hall meeting between World Bank president Jim Kim and staff  was broadcast to a large number of participants outside the hall and thus generated much discussion. While there is little doubt that the World Bank management’s airing of its dirty laundry during the annual meetings owes less to its commitment to transparency than to the rumoured threat of a work stoppage, it was nonetheless enlightening. Kim was told by a staff member that he seems surrounded by senior staff that are unwilling to challenge him and provide honest council. Others spoke openly of a of a culture of retaliation by senior management, in which criticism and disagreements are not tolerated.

Going forward, Kim’s ability to manage the fallout of his controversial restructure and satisfy CSO demands on the safeguards review will be critical to his ability to effect policy change and deliver on his vision. While at the IMF, although Lagarde has again advocated better cooperation, the next test for countries’ ability to work together – securing overdue IMF quota and governance reforms – suggests that these warnings are still being ignored.