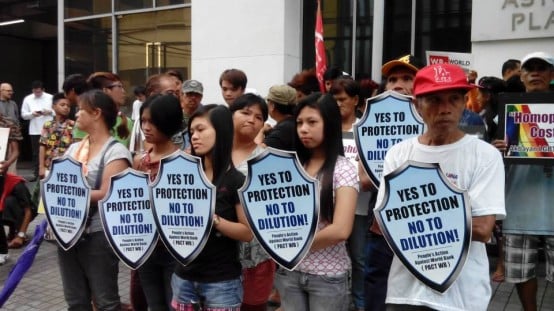 Protesters demonstrated their frustration with the new draft safeguards framework by walking out of a World Bank consultation, as an extension is announced to the second phase of the consultation process.

During the World Bank October annual meetings, over 300 civil society organisations (CSO) and affected community members released a statement expressing their frustration over the Bank’s new draft environmental and social safeguard framework (see Observer Sept 2014). CSOs, including the Zambian Federation of Disability Organisations and the US-based ‘Ulu Foundation, said that the draft safeguards failed to secure rights-based development by diluting the existing safeguards, thus “undermining the momentum for the upward harmonisation of social and environmental standards and their alignment with universal human rights.” During the Bank’s official safeguards consultation, CSOs and non-government organisations walked out to join a Bank protest outside.

Philippine CSOs also staged a walk-out protest against what they perceived as a watered-down draft environmental and social safeguards framework. Rayyan Hassan of the NGO Forum of the Asian Development Bank feared “that the low standard set by World Bank could set a trend to all global banking institutions which will cause a monumental dive to human rights in every part of the world.” Other areas of concern for CSOs and affected communities include the protection of indigenous peoples and the absence of a safeguard on gender identity and sexual orientation (see Bulletin Sept 2014). Jonas Bagas, of The Library Foundation said that excluding individuals from the development process because of their sexual orientation or gender “leaves behind communities that are already vulnerable, rendering development incomplete and impaired.”

the low standard set by World Bank could set a trend to all global banking institutions which will cause a monumental dive to human rights in every part of the worldRayyan Hassan, Asian Development Bank