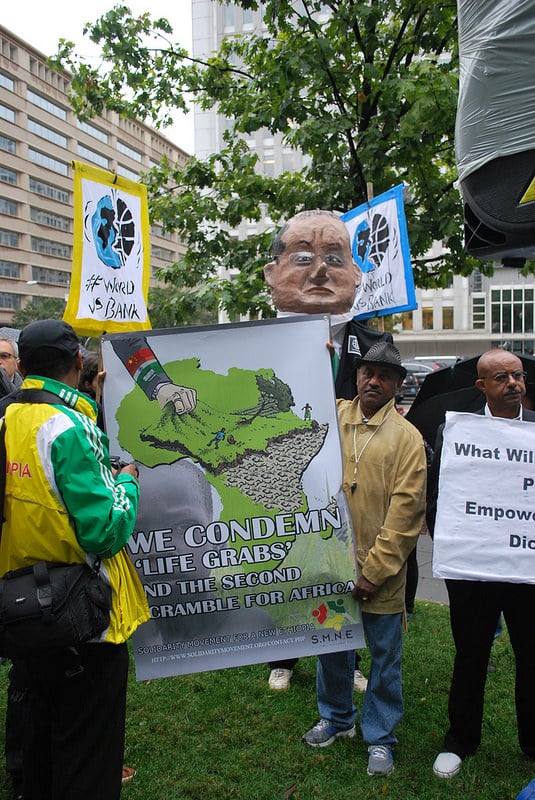 As the World Bank held its October annual meetings in Washington, hundreds of farmers, indigenous peoples and other social justice groups gathered in 12 cities across the world, including in India and Mexico, to protest against the World Bank’s controversial new agriculture rankings, and its role in promoting land grabs. The civil society coalition, which staged a global day of action under the slogan “WorldvsBank”, includes the African Biodiversity Network from Kenya and the US based Oakland Institute. Activists fear the Bank’s Benchmarking the Business of Agriculture (BBA) rankings, modelled on its heavily criticised Doing Business rankings (see Observer Autumn 2013, Update 86), threaten smallholder farmers and will result in harmful agricultural practices, and illegal land grabs (see Bulletin May 2014, Feb 2014). Alnoor Ladha of international NGO, The Rules called for “the end” of both sets of rankings saying that they were “tools of a pro-corporate, anti-poor, environmentally unsustainable model of development.” He added that: “If the World Bank keeps promoting economic activity that destroys biodiversity and the livelihoods of smallholder farmers, pastoralists, and indigenous communities, they should not have a mandate to exist.”

Anti-eviction activists mounted their own protest in Cambodia over signs that the Bank is considering resuming lending to the Cambodian government. In 2011 the Bank took the decision to suspend its loans to Cambodia, following intense criticism from the Inspection Panel (IP, the Bank’s accountability mechanism). The IP finding related to a complaint by affected communities about the Bank’s role in land grabs which led to the displacement of over 4,000 members of the Boeung Kak lake community in 2007 and to the Bank suspending its loans to Cambodia (see Observer Spring 2014, Winter 2014). However, according to David Pred of US-based NGO Inclusive Development, “There are still more than 3,000 families who were forcibly evicted from the Boeung Kak area and inadequately compensated between 2008-2011.  These families are in desperate need of housing and livelihood assistance and are entitled to this support under the Resettlement Policy Framework that was attached to the Bank project.”

In late August a proposal for a $25 million International Development Association (IDA, the Bank’s low-income arm) social land distribution project was published on the Bank’s website. However, in an October letter to the World Organization for Human Rights USA, the Bank’s country director for South East Asia, Ulrich Zacha, stated that “no decision has been made as yet” about resuming lending, and a decision would be taken “only in conjunction with a new Country Engagement Note, which itself would follow broad-based consultations with all key stakeholders”.

If the World Bank keeps promoting economic activity that destroys biodiversity and the livelihoods of smallholder farmers, pastoralists, and indigenous communities, they should not have a mandate to exist.Alnoor Ladha, The Rules

As recently as early October, evicted community members filed a criminal complaint with the International Criminal Court (ICC) in the Hague. The case has been backed by NGO Global Witness, which has drafted a statement, calling on the Office of the Prosecutor at the ICC to initiate a preliminary examination with a view to hopefully opening a full investigation. Tep Vanny, a representative of the Boeung Kak families, told the Phnom Penh Post that the community would be “very upset” if new loans were made without a resolution to their dispute. She said: “If the Bank provides the new loans to Cambodia to fund social land concessions it means that they are joining with the corrupt government of Cambodia to grab land from the poor.”