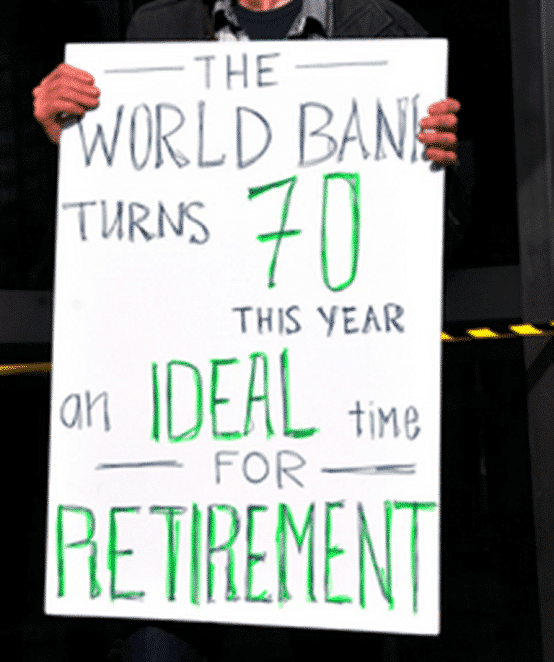 World Vs Bank protest in October 2014. Credit: Our Land Our Business

The global economic picture remains far from rosy, as major industrialised countries continue to stagger towards growth, with knock-on consequences for developing nations, as evident in a raft of new IMF lending and precautionary programmes across a host of countries.

In July 2014 the BRICS nations (Brazil, Russia, India, China and South Africa) came good on their promise to establish a development bank, and a new emergency fund in case of financial crises, in Fortaleza, Brazil, albeit with more modest ambitions than the coverage claimed.

The Bank’s restructuring process, which begun in 2013 continued its halting progress, with considerable staff discontent accompanying the changes and questions being posed about the impact of the restructure on the Bank’s operational capacity.

A year on since the World Bank’s strategy was formally approved, any progress was largely drowned out by increased internal discontent with the restructuring and cost cutting process emerging from the strategy. The year kicked off with a leaked 2013 internal staff survey which revealed that less than half of respondents agreed that the Bank “prioritises development results over the number and volume of transactions.” Three months into the July implementation of the reforms and just a week before the start of the October annual meetings, rumours of internal actions at the Bank in protest at the restructuring process hit the headlines, forcing president Jim Yong Kim to respond. Adding insult to injury, the findings of a report by the Bank’s Independent Evaluation Group (IEG), raised concerns about the “declining performance” at the Bank, pointing to the Bank’s private sector arm, the International Finance Corporation (IFC), as particularly problematic.

The year started and ended with the US Congress passing the annual appropriations bill for 2014 and 2015 respectively, both of which included restrictions on the country’s engagement with the international financial institutions (IFIs). The 2014 bill, passed in mid January, included instructions for the US representatives to ensure “just compensation or other appropriate redress to individuals and communities that suffer violations of human rights”. This included specific measures for communities affected by the construction of the Chixoy dam in Guatemala in the 1980s, which led the Guatemalan government in October to finally agree to pay reparations. It also mandated the US representatives at IFIs to vote against almost all forestry and hydropower projects. However, the bill did not include language authoring IMF governance reforms agreed in 2010.

The 2015 bill, passed in mid December, included an instruction for the US “to vote against any loan, grant, policy or strategy if such institution has adopted and is implementing any social or environmental safeguard relevant to such loan, grant, policy or strategy that provides less protection than World Bank safeguards”. The bill was a welcome win for the many civil society groups that have grown increasingly disillusioned with the Bank’s safeguards review. The new draft social and environmental standards, released to kick start the second phase of the review in late July, have been heavily criticised by civil society, as a dilution of the existing safeguards, such as on indigenous peoples rights. The consultation process itself also came under fire, with CSOs delivering a letter outlining concerns to Bank president Jim Yong Kim and staging several walk outs and other forms of protests. Moreover, civil society organisations have raised concerns about the ‘teeth’ of the Bank’s accountability mechanism, the Inspection Panel, which has been criticised over a new pilot approach to cases brought by affected communities.

The Bank’s focus on big infrastructure received increased attention with a new G20-linked initiative, the World Bank-hosted Global Infrastructure Facility, launched during the annual meetings. With little public information available, civil society has raised concerns about possible social and environmental impacts of the initiative. Its focus on scaling up public-private partnerships (PPPs) was challenged, including through a July evaluation by the Bank’s IEG, which revealed a lack of proven poverty reduction impact. 2014 witnessed increasing discussions about the role of the Bank on the world stage as many wondered about competition from the BRICS’ New Development Bank which will focus primarily on infrastructure finance. Additional questions were raised by the almost simultaneous launch by China of several infrastructure related initiatives, most significantly the Asian Infrastructure Investment Bank. Considerations of climate change were largely missing in this context. Many questioned the extent to which the Bank’s actions matched its climate change rhetoric.

Private sector and the IFC

The IFC’s controversial investment in Honduran palm oil producer Dinant made the headlines at the start of the year as the IFC’s accountability mechanism, the Compliance Advisor Ombudsman (CAO), released an audit report strongly criticising the IFC for failing to comply with its own performance standards. The audit pointed to systematic problems, such as the IFC’s organisational culture which prioritises financial performance ahead of environmental, social and conflict risks. The IFC is currently meant to be implementing an action plan on the Dinant case but in September the CAO nonetheless began investigating two complaints against Dinant. Grassroots farmers groups have accused the company’s security guards of committing human rights abuses, including kidnapping, murder, forced disappearances and evictions. They also accuse the company of polluting the environment.

2014 saw the IFC’s lending to financial intermediaries (FIs) come under increasing scrutiny. In April the Bretton Woods Project published a major report on development lending to FIs which found that between July 2009 and June 2013 the IFC invested $36 billion in FIs. This is three times as much as the rest of the World Bank Group invested directly into education and 50 per cent more than its direct investment in health care.

In August the CAO published an audit that found the IFC failed to adequately address environmental and social risks when it approved a $70 million loan to Honduran bank Ficohsa,  which has lent millions to another IFC client, palm oil company Dinant. In October the CAO released a follow on report to its 2012 audit of IFC investment in FIs which revealed that “important findings from the audit remain unaddressed.” The report found that the IFC still cannot accurately track or demonstrate whether its investments in FIs, around $10 billion in fiscal year 2014, do no harm and improve livelihoods. The IFC is yet to provide a comprehensive response despite pressure from civil society organisations who demand an adequate IFC action plan to address structural failings. This led NGOs to recommend “that the IFC undertakes fewer investments in the financial market sector, and dedicates more resources to ensure their positive outcome” and that “the World Bank Group develop a new group-level strategy for investments in the financial sector to fundamentally rethink the nature, purpose, modalities and limits of these investments.”

In September, a Bretton Woods Project briefing noted that while key multilateral development banks (MDBs), such as the IFC, European Investment Bank and Asian Development Bank, say urgent action is needed to tackle climate change they continue to invest billions of dollars in oil, gas and coal projects. The MDBs have $12.8 billion invested in publicly listed companies that already have access to capital markets and that could be at risk if the ‘carbon bubble’ bursts, placing public resources for achieving development objectives at risk.

Throughout the year the IFC continued to cause controversy through its support to luxury hotels and other projects with questionable development impact.

The IMF started its year ramping up its focus on inequality, and garnering many positive headlines from remarks by its managing director at the Davos World Economic Forum on the threat that inequality poses to economic growth. However, despite returning to this theme throughout the year, the prospect of IMF policies altering in such a way as to confront inequality seems limited.

During the October annual meetings , the IMF Committee (IMFC, the direction-setting body of finance ministers for the IMF) called for bold action to address a global economy that seems to be faltering without ever having got back up to speed following years of anaemic growth. The IMFC’s mantra of “bold, ambitious” measures included cautioning that macroeconomic policies be “appropriate” while advocating “critical, structural reforms”. This pointed to concerns over growing debt levels across countries from the low- to high-income spectrum, exacerbated by stalling growth. At the annual meetings, a grouping of Francophone Sub-Saharan African states warned that “risks to debt sustainability” are growing; from external loans, domestic debt and public-private partnerships (PPPs). The latter is prioritised by most international institutions and the G20 as the main strategy to address high debt, low growth and low investment. The year ended with a high-profile debate about the impact of the IMF’s historic structural adjustment programmes in the Ebola-hit West African countries, with calls for the Fund to cancel debts of Guinea, Liberia and Sierra Leone.

Another long-running sore that seems only to fester is the Fund’s failure to implement governance reforms agreed in 2010 as part of its 14th review. These schedules are becoming increasingly meaningless; the 15th review cycle should have begun. In January, the Fund published a statement by the executive board demanding that the IMFC reiterate – presumably back to the board – that these reforms are crucial and the on-going failure to implement them due to the US Congress refusing to ratify the reforms, is unacceptable. This itself was a failure to fulfil the Fund’s own promises to accelerate the reform process, as it had repeatedly stated that if the (already-shifted) January 2015 deadline was not met then staff would publish alternative approaches which would, in effect, bypass the United States’ effective veto. No such proposals have been published to date and another discussion is not planned until the 2015 April meetings of the IMFC.

What this local difficulty masks is the frustration amongst developing countries and in particular the BRICS nations at not just American obstruction but the failure of European states to take a lead. This is unsurprising given that all the measures of determining countries’ share of quota and voting rights in the Fund indicate Europe is still hugely over-represented and rather happy with the status quo as a result. It is little wonder then that the BRICS nations have explicitly linked the need to develop their own alternatives to the Bank and Fund to the unwillingness of industrialised nations to reform governance of the IMF and World Bank in a meaningful fashion.