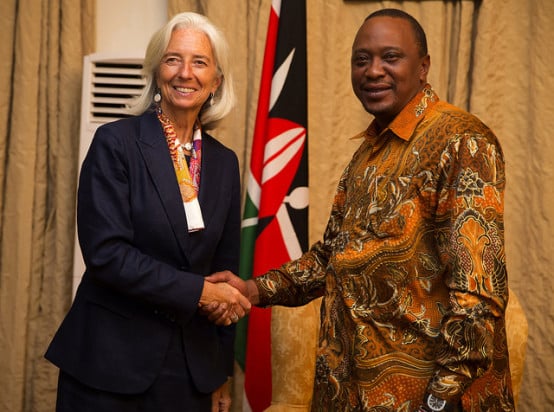 The number of IMF loans and agreements continues to increase despite IMF managing director Christine Lagarde remarking in April that “structural adjustment was before my time” (see Observer Autumn 2014 ). The IMF persists in advocating familiar reforms focused on increasing use of indirect taxes, public sector layoffs and reductions in subsidies to publicly-backed companies. Moreover, there is an increase in the use of precautionary agreements, whereby states agree to an IMF-monitored programme of reforms, or conditionalities, in exchange for the availability of funds. These funds are not necessarily drawn unless the country faces further financial difficulty. The Fund has stressed in recent years that, when lending, it provides more borrower ownership of policy decisions and related reforms than ever before.

In November 2014, the IMF suspended disbursement of a $140 million payment for its $954 million Extended Credit Facility (ECF) to Bangladesh. According to media reports, the IMF had made its disbursement conditional upon the government announcing a new value added taxation (VAT) law within an explicit timeframe, which would commit the government to maintaining a 15 per cent rate while reducing exemptions.

Government ministers resisted the IMF’s recommendation and established a committee to examine the VAT question, which advocated reduced VAT rates and more, not less, exemptions. It warned that the IMF-recommended higher rate would stifle small businesses and growth, while penalising domestic producers against international competitors.

Nevertheless, the government later accepted the IMF’s requirement for a uniform 15 per cent VAT level. Finance minister Abul Muhith confirmed in January that “we are not going to reduce the existing VAT rate. IMF feared that the rate would be cut. They set [a] condition not to reduce it for releasing two tranches of ECF”. VAT had originally been introduced to Bangladesh in 1991 under an IMF- and World Bank-supported liberalisation programme.

In late December 2014 Serbia’s parliament passed a budget designed to secure a precautionary loan agreement reached with the IMF, targeting a reduction in the budget deficit of between €1.3 and €1.4 billion ($1.5 – $1.6 billion). Finance minister Dusan Vujovic told parliament during a 19 hour debate that the three-year loan agreement worth €1.3 billion “will not be drawn, but is there just in case”. In May 2014 Serbia suffered floods which caused damage estimated to cost €1.5 billion, larger than the total value of its loan agreement with the Fund.

According to reports from news agency Reuters, apart from privatising a number of state-held entities, the agreement will entail cutting up to 27,000 jobs in the public sector, in order to make savings of €600-650 million. The government has additionally committed to cut most existing financial support to publicly-backed companies. Economy minister Zeljko Sertic said in January that “under the IMF deal, half of privatisation revenues can be directly invested in important infrastructure projects … while the rest can be used for the repayment of expensive loans”, but warned that there is “little hope for revenues from sales of such companies”.

The IMF will discuss approval of the loan agreement with Serbia in February. The IMF’s resident representative in Belgrade welcomed the budget decision, saying that “the adopted budget is in keeping with the agreement reached by the Serbian government and IMF in November concerning the economic programme that could be backed by a 36-month stand-by precautionary arrangement”, adding that Serbia had also indicated that it would implement further reform measures agreed with the IMF mission.

Despite having only received the final instalment of a $750 million loan package in December 2013, in November 2014 Kenya also agreed a precautionary loan with the IMF. A Fund press release stated that board agreement will be sought for a stand-by arrangement and stand-by credit facility in late January.

The IMF Kenya representative, Armando Morales, said in November that “about 70 per cent of the funds will be provided on non-concessional terms”. The credit facility will initially be available for one year, with provision for extension.  Despite optimism surrounding significant Chinese infrastructure investments and the benefit of recent lower oil prices, Kenya’s recourse to the Fund appears to vindicate concerns expressed last year regarding economic vulnerability in a number of sub-Saharan Africa states (see Observer Autumn 2014).

This vulnerability has also seen a long-awaited announcement from Ghana that it too is expecting approval of an IMF agreement (see Observer Autumn 2014). In January, deputy finance minister Cassel Ato Forson said “we’ve reached an agreement as long as the policy objective is concerned; we’ve reached an agreement as long as memorandum of economic and financial policy is concerned. The IMF is only working with us to finalise [an agreement] and go to the board next month”.

In November 2014, in a statement responding to the government’s budget statement to parliament, the Ghana Trades Union Congress argued that Ghana does not need the IMF: “We need … appropriate made-in-Ghana policies” it stated, adding that “we are ready to work with the government to implement such home-grown policies but not IMF-sponsored policies.”