The International Monetary Fund and the Ebola outbreak 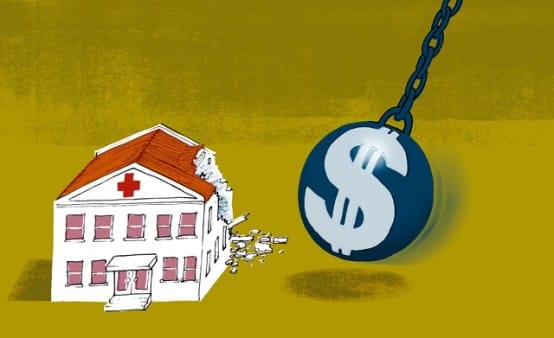 by Julia Robinson and James Pfeiffer

As 2015 began, the world received a sobering message. Not only have the number of Ebola cases exceeded 20,000, but in some affected countries, especially Sierra Leone, the virus is still spreading. The death toll now tops 8,000 and the usual answers to how this outbreak got so huge so quickly – poverty, bad governance, cultural practices, endemic disease in Guinea, Liberia  and Sierra Leone – are giving way to a deeper questioning of the poor public health response. Critics are turning to the structural causes of weak health systems and increasingly showing that international lending policies, including and especially those employed by the IMF, should carry much of the blame.

The IMF has been active in West Africa for many years; the first IMF loan to Liberia was in 1963. And for almost as long, public health activists have pointed to the detrimental effects of the strings the IMF attaches to its loans, known as conditionalities, which more often than not constrain investment in public sector health services. As a December 2014 comment in medical journal, the Lancet explained, the IMF has provided support to Guinea and Sierra Leone for nearly two decades, and to Liberia for seven years. All three countries were engaged in IMF programmes when the Ebola crisis began.  IMF conditionalities meant countries have had to prioritise repaying debt and interest payments over funding critical social and health services. Countries such as Guinea, Sierra Leone and Liberia have had to limit not only the number of health workers they were able to hire (Liberia had only 60 doctors before the Ebola outbreak, Sierra Leone had 136), they’ve also had to cap wages to a pitifully low level to meet broader IMF policy directives. The Lancet comment also points out that in Sierra Leone, IMF-mandated policies explicitly sought to reduce public sector employment. In 1995 -1996, the IMF required the retrenchment of 28 per cent of public employees. The World Health Organisation reported a reduction of community health workers from 0.11 per 1,000 population in 2004 to 0.02 in 2008. Caps on wage spending continued into the 2000s. The Lancet authors state, “By 2004, [Sierra Leone] spent about 1.2 per cent of GDP less on civil service wages than the sub-Saharan African mean.”

The problem is, the IMF requires cuts to the same public systems that could respond to a health crisis before it sweeps across the country. When countries sacrifice budget allocations to meet macroeconomic policy prescriptions, as per the IMF’s decree, it is at the expense of social spending. Without money to fund basic infrastructure, health facilities are left crumbling, sometimes without access to water or electricity, and completely unprepared for complex emergencies.  Few health workers are trained in infectious disease control, and those that have received training lack protective equipment and materials due to non-functioning supply systems. It is no wonder that when a truly serious epidemic such as Ebola entered the scene, the West African countries, which have had to deal with IMF conditions for decades, found themselves struggling to respond.

to learn the true lesson from the Ebola crisis to prevent the next public health crisis in Africa, IMF conditionalities must end, debt cancelled, and health systems built – no strings attached.

A considerable amount of money has poured in to fight Ebola, about $1billion so far, some of it from the IMF itself. Just how much of this money will go to build health systems, though, is under debate. In the past, IMF austerity conditionalities included directives to put aid money away in national reserves for a rainy day. Indeed, research has shown that increased funding for health, while under the influence of IMF programmes, actually reduces governments’ spending on health – because if they did, they would be violating the conditions of IMF loans. So the $1billion of Ebola aid that could help to build the very same health systems that had deteriorated from decades of IMF constraints is constrained once again and is diverted to fund one-off NGO projects or short-term UN programmes.

There is a growing chorus calling for reform to IMF policies, and the slow response to Ebola has shone a light on just how weakened the health systems have become after decades of restrictions in the name of economic reform. First among this chorus are the presidents of affected countries. At an October 2014 press conference with the IMF, World Bank, and presidents from Guinea, Sierra Leone, and Liberia, Guinean president Alpha Condé remarked, “I’m extremely pleased to hear the IMF managing director [say] that we need help and we can increase our deficit, which is quite a change from the usual narrative.”

Pressure has come from all sides for the IMF to loosen its restrictions on deficit spending as well as to forgive billions of dollars in debt and to rechannel those debt servicing payments to funding lifesaving health services, supplies, and desperately needed personnel to respond to what has been an overwhelming patient load. Even the G20 issued a statement in November 2014 urging the IMF to “ease pressures on Guinea, Liberia and Sierra Leone, through a combination of concessional loans, debt relief, and grants”. The US, the largest shareholder of the IMF, is also pushing to erase about 20 per cent of the three countries’ total IMF debt. Had these measures been taken a decade earlier, and the resources invested in public sector health systems, it is likely the Ebola outbreak could have been quickly contained and thousands of lives saved. The US Congress has pledged $5.4 billion in its 2015 budget, $2.5 billion of it going straight to African countries in their efforts to fight or prevent the virus from entering their country.

That’s all a good start, but we’ve got to learn the true lesson from the Ebola crisis to prevent the next public health crisis in Africa.  IMF conditionalities must end, debt cancelled, and health systems built – no strings attached.

The International Monetary Fund and the Ebola outbreak