Office of the High Commissioner for Human Rights 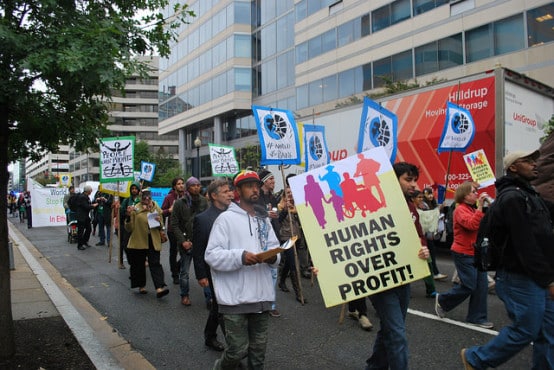 In a December 2014 letter to the World Bank’s president Jim Yong Kim, 28 UN rights experts raised “a number of concerns” about the Bank’s proposed new draft social and environmental framework. The draft, which aims to update the existing Bank safeguards framework, is currently under consultation (see Bulletin Nov 2014, Observer Autumn 2014).

The experts particularly criticised the Bank’s approach to human rights, noting that “the Bank’s proposed new safeguards seem to view human rights in largely negative terms.” Furthermore, the draft framework “seems to go out of its way to avoid any meaningful references to human rights and international human rights law, except for passing references”, despite that “human rights are not merely a matter of sound policy, but of legal obligation”. The letter stressed that “the failure of other lenders to require that projects they fund should respect human rights standards is not a valid reason for the World Bank to follow suit”, calling it “a race to the bottom”.

Earlier, in November 2014, Philip Alston, one of the signatories and UN special rapporteur on extreme poverty and human rights, wrote an article on human rights for the Washington Post titled “two words that scare the World Bank”, in which he noted: “The official reason is that the Bank’s 1944 Articles of Agreement forbid it from considering political matters. Human rights are seen to be in a wholly different category from the supposedly antiseptically apolitical work of the Bank. This is nonsense, of course” (see Update 56). He went on to call the Bank’s reticence “largely political”. Furthermore: “Today, every country, and thus every Bank member state, has ratified human rights treaties imposing binding legal obligations to respect rights. … Even most large corporations have human rights policies that put the Bank to shame. The Bank is a lonely outlier, apart from its twin, the International Monetary Fund.” On the safeguards review Alston wrote that “the Bank’s main concern seems to be to minimise its own responsibilities in relation to rights violations.” In response to the article, the Bank clarified that according to the draft new standards, the Bank’s operations “are supportive of human rights.” The article followed a mid October speech by Alston at the World Bank, where he questioned the Bank’s “divergent messages” on human rights, calling for “a new beginning in which the Bank recognises the indispensability of a nuanced policy on human rights”.

Even most large corporations have human rights policies that put the Bank to shamePhilip Alston, UN special rapporteur on extreme poverty and human rights

The US 2015 Omnibus Appropriations Act, authorising the expenditure of public funds for a specified purpose, was passed by Congress in December 2014. In a move welcomed by civil society organisations, the Act included an instruction for the US, the Bank’s largest shareholder, “to vote against any loan, grant, policy or strategy if [the Bank] has adopted and is implementing any social or environmental safeguard … that provides less protection than World Bank safeguards in effect on September 30, 2014”. Furthermore the Act required that the US in all international financial institutions (IFIs) “seek to require that such institution conducts rigorous human rights due diligence and human rights risk management, as appropriate, in connection with any loan, grant, policy, or strategy of such institution”. Rio Ismail of NGO Ecological Justice Indonesia commented that the requirement “is of enormous importance to local communities impacted by international financial flows.” The 2014 Act also included restrictions for US IFI representatives, such as to prohibiting them from supporting projects involving logging in tropical forests and all large dams (see Observer Winter 2014).

Meanwhile, the ongoing consultation process on the safeguards framework continues to provoke controversy. A November letter, coordinated by NGO coalition Bank on Human Rights and signed by 50 NGOs, including OTWatch in Mongolia and Social Justice Connection in Canada, argued that many consultation events “have been compromised by inadequate notice and restricted access”. It listed several obstacles to participation, including that in the majority of consultations participants had been “hand-picked … with no transparency as to how invitation lists are compiled”. The Bank responded in early December that the consultation process was run “in accordance with international best consultation practice”.

Further submissions have been registered on the Bank’s consultation website, including a December 2014 submission from 27 indigenous peoples organisations in Tanzania. The organisations expressed concern “with the overall weakening of the policy requirements for indigenous peoples which in turn has very serious implications including; denial of the existence and rights of indigenous peoples under international human rights laws, lack of meaningful and effective participation, forced eviction and lack of access to information.” Furthermore: “The proposal that the implementation of policy requirements for indigenous peoples could be subject to an ‘opt-out’, or that borrowers can use their own systems or national laws that are not aligned with the recognition of the rights of indigenous peoples under international human rights instruments are both unwelcomed and unacceptable.”

Following a further extension, the consultation period has been confirmed to end on 1 March. A revised draft framework is expected to be released by the Bank in mid 2015.

Office of the High Commissioner for Human Rights