Putting a price on carbon statement

The Darker Side of Green: Plantation Forestry and Carbon Violence in Uganda 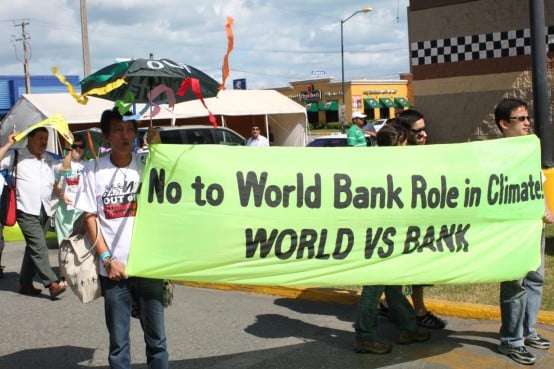 The World Bank continues to promote putting a price on carbon as a key policy to tackle climate change. To coincide with the United Nations (UN) climate summit in September 2014 the Bank played a leading role in coordinating a nonbinding statement on pricing carbon signed by 74 countries, 23 subnational jurisdictions and over 1,000 businesses. According to the Bank this covers around half of global greenhouse gas emissions.

The Bank followed up on this work by effectively calling for the inclusion of carbon pricing in the draft negotiating text at the most recent round of UN climate change talks held in December in Lima, Peru. The draft text contains a range of options, with one describing carbon pricing as a “key approach for cost-effectiveness of the cuts in global greenhouse gas emissions”. One of the Bank’s key objectives this year will be to ensure this language on pricing carbon stays in the negotiation texts so that it is included in the final agreement expected to be signed by the world’s governments in Paris in December (see Observer Spring 2014).

The Bank’s website explains that there are two main types of carbon pricing. First, cap-and-trade systems which cap the “total level of greenhouse gas emissions but then allow those industries with low emissions to sell their extra allowances to larger emitters”. As industries buy and sell allowances between each other a market (an emissions trading scheme, ETS) is created which “establishes a market price for greenhouse gas emissions.”

Second, a carbon tax “directly sets a price on carbon by defining a tax rate on greenhouse gas emissions”. “It is different from an ETS in that the emission reduction outcome of a carbon tax is not pre-defined but the carbon price is.” The Bank states other ways to price carbon include fuel taxes, removing fossil fuel subsidies and making payments based on emissions reductions (carbon offsets). The Bank points out that putting a price on carbon is not new as it is already happening in around 40 countries.

However, there is a debate about whether carbon markets or carbon taxes are more effective at reducing emissions because they operate differently (although some argue they are not necessarily mutually exclusive). This centres on which stakeholders will be required to reduce their pollution, and also the estimated impact the policy will have on reducing aggregate emissions. Under a cap-and-trade system a maximum cap is applied, whereas with carbon taxes there is only certainty about the costs of pollution meaning there might not be enough emissions reductions.

The Bank’s messaging on carbon pricing is becoming increasingly opaque because it references a wide range of policies under one banner. In a speech prior to the Lima climate summit Bank president Jim Yong Kim said “effective prices on carbon can be discovered by taxes, market mechanisms or regulation”. And the September 2014 pricing carbon statement says, “various instruments can be used to price carbon to efficiently and cost effectively reduce emissions, such as domestic emissions trading systems, carbon taxes, use of a social cost of carbon and/or payments for emission reductions.”

In practice the Bank has placed a much bigger emphasis on carbon markets and this is no surprise given the Bank’s long track record of backing nascent carbon markets (see Observer Spring 2014). However, it is now increasingly mentioning carbon taxes in its communications work on carbon pricing. In his speech ahead of the Lima climate talks Kim mentioned carbon taxes, saying that “carbon pricing can raise revenues and these added resources can be used to generate more economic and social benefits. We can do this by, for example: moving from ‘taxing the goods’ to ‘taxing the bads’; by using carbon tax revenue to reduce labour and investment taxes, and to encourage job creation and economic development; or by supporting innovation and the development of green technologies through research and development subsidies.” He highlighted the success of the carbon tax in the Canadian province of British Columbia in reducing emissions, providing a net benefit to tax payers and increasing economic growth.

Pablo Solón of Thailand-based NGO Focus on the Global South argued in a September article that the Bank is deliberately fudging what carbon pricing means “to promote carbon markets in a new, clever way: by combining candy and poison”. He criticised carbon markets because instead of requiring reductions in pollution they “give stakeholders permits to pollute”.

A range of civil society groups, including Carbon Trade Watch, have repeatedly criticised carbon markets because they do not reduce emissions at their source, thus allowing the countries and companies that have caused climate change to transfer their historic responsibility to others (see Observer Spring 2014, Update 85). During the Lima climate change talks a civil society statement noted that the negotiations had left the possibility open “for the further expansion of the failed experiment of carbon markets”. These include potential “carbon credits from forests and soil, which undermines communities’ land rights and would be devastating to farmers and forest communities across the world”. The statement continued: “we are fighting for a transformation of energy systems, away from fossil fuels, towards access to decentralised, renewable, safe, community controlled energy systems for all.”

In late November the World Bank released its latest report on climate science with data showing that it is very likely it will not be possible to prevent a temperature increase of 1.5°C above pre-industrial levels by 2050. Writing for the Huffington Post Nezir Sinani of US NGO the Bank Information Center, highlighted that the Bank needs to match rhetoric with action by ending support for coal projects in South Africa and India, while also improving energy access for the poorest through off-grid energy.

Although analysts expect the global value of carbon markets to grow this year (based on the volume of sales of carbon credits) the incentive to shift to renewable energy has been weakened in recent years by very low carbon prices in key markets such as the European Union’s emissions trading scheme (EU ETS) and the international offset mechanism the Clean Development Mechanism (CDM). In its annual survey of carbon pricing initiatives, released in May 2014, the Bank acknowledged these acute problems – such as oversupply of emissions allowances in the case of the EU ETS, and prices averaging just $0.51 in the CDM in 2013 with “no price recovery foreseen in the near future”.

Advocates of carbon markets are hoping that a global deal on climate change in December in Paris will include carbon markets as a key policy option to reduce emissions and spark demand for carbon credits that are currently heavily oversupplied. However, the weak agreement in the recent Lima climate talks means it is more likely that the final global climate change agreement will allow all countries, regardless of their historical responsibility in causing climate change, to voluntarily decide their levels of emissions reductions. This means there might not be sufficient demand for carbon credits, and crucially that there will be no guarantees the world will prevent irreversible global warming.

It appears the Bank is potentially preparing for a scenario where the Paris climate deal does not provide sufficient demand for carbon credits by supporting “bottom-up” approaches at the local, national and regional levels to put in place the building blocks for a potential global carbon market. The Bank announced in December 2014 that it would actively work to link up the diverse types of carbon markets to avoid “market fragmentation” and ensure there is “a widely accepted price on carbon”. In a December blog Rachel Kyte, Bank vice president and special envoy for climate change, said the focus should be “on how globally networked carbon markets can emerge and how to get prices right”.

The social impact of pricing carbon: IFC-financed evictions in Uganda?

A November report by US think-tank the Oakland Institute called for an end to alleged direct and structural violence suffered by farmers in relation to Norwegian company Green Resources forestry plantations in Uganda. Green Resources received an $18 million loan in 2010 from the International Finance Corporation (IFC, the World Bank’s private sector arm) and participates in several certified carbon market schemes, including the CDM.

Subsistence farmers who live in the areas where Green Resources operate in Uganda claim they have been “denied access to land vital for growing food and grazing livestock” (continuing an existing trend of evictions) and that agrochemicals used on the forestry plantations have polluted land and waterways “resulting in crop losses and livestock deaths”. Evicted villagers who tried to return to their lands say they were attacked. According to the report the company says it has complied with IFC guidelines on social and environmental sustainability, as well as the World Bank’s policy on involuntary resettlement.

The report calls for investigations into the allegations against Green Resources, and a rapid expansion of renewable energy to reduce the use of carbon offsetting. It concludes: “this case reveals that pricing carbon imposes new forms of livelihood constraint and abuse, including out-sourcing environmental responsibility for addressing climate change to the Global South.”

In a response on its website Mads Asprem, CEO of Green Resources, said the report was “full of mistakes and unsubstantiated claims”. He denied the project had led to evictions and said it was “incorrect that there is pollution by agro-chemicals”. He did acknowledge people had been denied “access to start agricultural activities in planted areas within the two national forest reserves.”

Putting a price on carbon statement

The Darker Side of Green: Plantation Forestry and Carbon Violence in Uganda