The changing role of the World Bank Inspection Panel 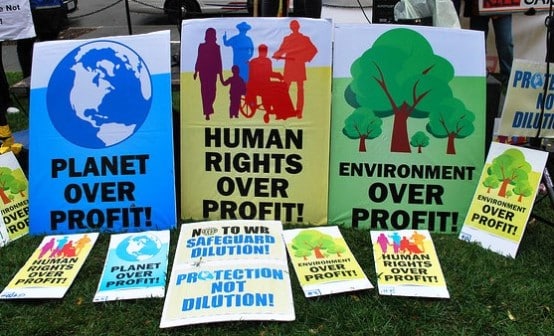 As the World Bank reviews its social and environmental safeguard policies (see Observer Winter 2015, Autumn 2014, Bulletin Sept 2014), attention has been diverted from processes linked to the Bank’s other lending mechanisms, such as Development Policy Financing (DPF) and Program-for-Results (PforR). Initiated in 2012, the safeguards review was launched with the aim of creating simplified system by consolidating the policies, procedures and guidelines into one policy statement and an accompanying procedure statement. With two rounds of consultations concluded, a second draft of the new Environmental and Social Framework is expected to be released this summer for a final round of consultations.

A major concern raised early in the safeguards review by many NGOs is the exclusion of lending instruments other than Investment Project Financing (IPF, see Update 83, 82), the traditional and most used lending instrument under the Bank’s middle- and low-income arms, the International Bank for Reconstruction and Development (IBRD) and the International Development Association (IDA) respectively. Most importantly, DPF is excluded. Initiated in 2004, DPF “provides rapidly-disbursing financing” for policy or institutional reforms “through non-earmarked general budget financing … subject to the borrower’s own implementation processes and systems”. While less used than IPF, DPF represents around one-third of total Bank commitments since financial year (FY) 2005, including a spike during the global financial crisis. In FY14 it represented almost half of IBRD and over a tenth of IDA commitments.

Despite DPF’s significance, World Bank safeguards do not apply. Instead staff are required to assess whether policies supported are “likely to cause significant effects… If there are significant gaps in the analysis or shortcomings in these systems the Bank describes … how such gaps or shortcomings would be addressed before or during programme implementation, as appropriate.” However, according to a 2013 briefing by US-based NGOs Bank Information Center (BIC) and Global Witness, “the policy lacks detailed requirements on how risk assessment and mitigation … and how a country system analysis should take place, as well as clear and verifiable requirements for transparency, participation and accountability in policy design and implementation. Instead, such details are found in voluntary guidance … and toolkits.”

PforR has the potential to expose communities and the environment to riskJocelyn Medallo, Center for International Environmental Law

The briefing also outlined several examples where the Bank’s use of DPF has been questioned. This included a 2005 loan to the Democratic Republic of Congo, which included introduction of a regulatory framework for industrial logging concessions, but without environmental and social assessments. Forest communities brought a complaint to the Bank’s accountability mechanism, the Inspection Panel (IP), which concluded that the Bank’s system “is flawed”.

There has never been a formal review of DPF, however, every three years it is assessed internally through a “retrospective” to “learn from implementation”. The latest retrospective was initiated in December 2014 and includes a focus on social and environmental risk management. Face to face consultations are scheduled for April and May, and findings are expected to be presented to the Bank’s board in October. The previous retrospective in 2012 resulted in reforms, such as “development of a guidance note on poverty and social impact analysis.”

The Bank’s most recent addition to its lending instruments, Program-for-Results (PforR, see Bulletin Feb 2014, Update 79), is also excluded from the safeguards review. Initiated in 2012 with a two-year pilot, limiting operations to five per cent of total IBRD and IDA commitments, PforR aims to strengthen recipient government programmes and disburse funds based on achievement of agreed results verified by disbursement-linked indicators (DLIs). PforR does not currently support programmes which include Category A activities (activities that pose the risk of potentially significant and irreversible adverse impacts on the environment and/or affected people). The Bank’s safeguards do not apply to PforR, which instead primarily relies on the borrower country’s domestic laws, policies and systems. An environmental and social systems assessment is used to assess how the programme’s systems reflect a set of PforR-specific principles, however, borrowers are not required to disclose details and risk assessments of sub-projects. An agreement is made on how to deal with identified gap in procedures, to be addressed before or as part of the implementation of the operation.

An internal review of PforR was initiated in 2013 to “assess the early experience with the design and implementation of PforR operations and the challenges faced … [and] identify emerging early lessons and recommend any proposed changes to the PforR framework”. A progress report is due to be discussed by the Bank board in early April. Furthermore, a report by the IEG will “assess early implementation experience and identify lessons learned and good practice”, but not until 2016.  A key decision for the board will be whether to lift the initial funding cap. Jocelyn Medallo of US-based NGO Center for International Environmental Law said: “PforR has the potential to expose communities and the environment to risk. The Bank should adopt a prudent prudent approach by revisiting the funding cap only after the IEG completes an evaluation.” A July 2014 report by BIC, reviewing the initial impact of PforR in Vietnam, confirmed some of the concerns. This included that the programme’s DLIs lacked incentives to target poorer households as “communities that are closer to meeting their targets are preferenced, rather than those in greatest need.” The report argued that with a narrow focus on tangible quantifiable results: “In their current form DLIs are not well-suited to addressing social and environmental concerns”.

NGOs, such as BIC, have argued that there is no reason why safeguards can’t be applied to DPF and PforR, and that they therefore should have been included in the safeguards review. A 2010 IEG review of the safeguards also did not include DPF, but noted: “Considering the sizable share of development policy lending, the nature and quality of its environmental and social impacts need to be looked at separately”. The Bank’s use of trust funds has also come under increased scrutiny, due to the Bank’s differing roles depending on type of fund and hence application of Bank policies (see Observer Winter 2015). Furthermore, a 2011 “observation” on the PforR by the IP stated that “the availability of policy safeguards has been an important element in safeguarding the affected people and the environment from harm, and the Bank against significant reputational risk.”

Other concerns may have influenced the decision, as the Bank adjusts to a changing external environment. According to a September 2014 report by the New York University (NYU) School of Law safeguards may be “seen by borrowers to impose onerous obligations that increase transaction costs, this may make financial resources offered by the Bank appear even less attractive by comparison to other sources of finance”. With regards to PforR, the report argued that it might lead to “greater procedural flexibility that confers more discretion on the borrower in choosing how to comply with the social and environmental policy requirements at the project level.”

This approach can sidestep questions around accountability. The IP “observation” also raised concerns about PforR, including that: “there is lack of clarity on the basis for determining the eligibility of requests submitted to the Panel … since Bank financing may constitute a small portion of the programme … and the concept of disbursement against development results makes it even more difficult to trace Bank financing to particular activities on the ground. A key difficulty relates to establishing the causality or the linkage between the harm alleged by the requesters and non-compliance by the Bank with its operational policies and procedures.” According to the NYU School of Law report this also makes it difficult for affected communities to identify whom to approach when their rights have been breached: “As the modality of the Bank’s support in PforR operations is most likely to take the form of budget support, it may be more difficult for affected communities to have knowledge of the Bank’s involvement in a country’s development program and therefore lead to fewer requests for inspection.”

Similar issues have been reported regarding DPF. According to BIC and Global Witness “communities have difficulty holding the Bank accountable due to limited transparency and consultation requirements relative to investment projects.” Furthermore, the IP “cannot review complaints relating to loans that have closed or are more than 95 per cent disbursed … Due to the fast disbursing characteristic of DPLs [development policy loans], whereby money is usually disbursed as a single tranche, impacted communities often have a very narrow window to assess DPL details after approval and can only base their claims on anticipated harm, where the causal connection between policy and harm can be difficult to prove.”

The changing role of the World Bank Inspection Panel