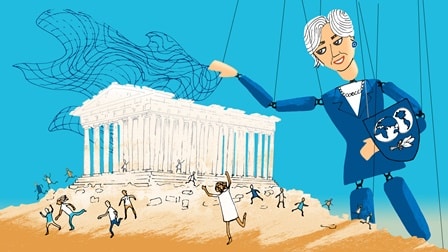 In February, Greece agreed a four-month extension to its loan from the European Central Bank (ECB) and European Commission (EC), which along with the IMF comprise the Troika of lenders to eurozone states since 2010. The loan is subject to a review of the reforms the government commits to undertake during the extension. The IMF, however, is not part of the new agreement.

Greece currently owes €245 billion ($260 billion) to the three creditors. Conditionalities required for the financing include measures such as privatisations, looser labour laws and pension cuts (see Observer Winter 2015). The Greek government was elected on a platform repudiating the legitimacy and economic value of the loan conditionalities, and demanding an overall reduction in its debts. This democratic mandate is now threatened because Greece faces a number of payments to the IMF and bondholders while negotiating with its European partners. During negotiations prime minister Alexis Tsipras has repeatedly stated that further financial support is necessary so that Greece can make urgent payments.

Greece insists its reform programme will not affect its loan agreement with the IMF (see Update 83). Finance minister Yannis Varoufakis, speaking in the wake of the extension agreement, stated that “we shall squeeze blood out of a stone if we need to” in order to repay the Fund. €1.5 billion of repayments to the IMF were due in March.

Germany finance minister: “time is running out for Greece”

According to the eurozone member states which negotiated the extension, financial aid will not be provided until the lenders complete a review of economic policy reforms and a more detailed list of reforms is provided. Fears over Greece’s banking sector are also mounting, since the ECB indicated in February that it would halt lending to local banks (potentially triggering a financial crisis) if the proposed reforms were unsatisfactory. The full list of proposed reforms is expected from Greece at the beginning of April. It is expected to include reduced budget surplus targets and a much greater emphasis on tackling tax avoidance and evasion.

Creditor states have already indicated that the conditionalities agreed by the previous Greek government with the Troika should be honoured. German finance minister Wolfgang Shäuble cautioned in February that “time is running out for Greece”.

Following the initial extension agreement, IMF managing director Christine Lagarde wrote a letter to the Dutch finance minister and chair of the eurozone group of countries, giving the extension lukewarm support. She described it as a “valid starting point” but also complained that Greece’s initial list of reforms was “not very specific”. Lagarde indicated that the agreement risked neglecting policies agreed by previous governments, including “comprehensive pension and VAT … privatisation … and labour market reforms”.

Sharan Burrow, of the International Trade Union Confederation, challenged the IMF’s right to demand these reforms at all, saying “five years of austerity and deregulation have brought economic depression, greater inequality and 25 per cent unemployment”. Burrow added “it makes no sense for the IMF to push this agenda when Greek voters clearly expressed their desire for change.”

IMF a “slush fund” that “gave money to save German and French banks, not Greece”

The IMF’s legitimacy in Greece was further questioned by one of its own executive directors, Paulo Batista, who represents the Brazil-led constituency on the IMF’s board. In early March, Batista set out how the IMF “gave money to save German and French banks, not Greece … [the IMF] put too much of a burden on Greece and not enough of a burden on Greece’s creditors”. Despite this, news agency Bloomberg reported in March that Fund officials labelled Greek government representatives the “most unhelpful ever”. Prime minister Alexis Tsipras responded the same day in the Greek parliament saying “let them keep their threats”.

Batista’s point was reiterated in a February Project Syndicate blog. Alberto Bagnai, University of Sapienza, Italy, and his fellow authors observed that although the Fund claimed in 2012 that the Greek debt was sustainable, by 2013 its staff admitted that they had known that it was not. The actual motive for going ahead with the programme was “the fear that spillovers from Greece would threaten the euro area and the global economy” (see Update 86). Therefore the only reason the IMF gave the loan was “Europe’s initial refusal to contemplate debt reduction for Greece”. The authors concluded that “the new Greek government is entirely justified in questioning the terms that the country was given”.

Desmond Lachman, the former deputy director of the Fund’s policy development and review department, condemned the Fund’s role in Greece in a February blog. He argued that no previous loan ever “produced such disappointing results”. He pointed out that “because of IMF-imposed austerity, the Greek economy now finds itself mired in an economic depression.” Lachman concluded that the IMF was “abused by its political masters” to “avoid needed debt restructuring and delay exchange rate adjustment”, reducing the IMF to nothing more than a “slush fund”.

In March the Greek Parliament announced the creation of a debt audit commission to identify any illegitimate Greek debts for which Greece would not be responsible. “The purpose is to identify any debts taken on by the Greek government that may have an illegal, illegitimate or odious nature,” declared the speaker of the Greek parliament, upon proposing the debt audit. She added that the Greek people have “the right to demand that any part of the Greek debt that may eventually be shown to be illegal – be erased”. The commission will be led by Eric Toussaint, of Belgium-based NGO CADTM, who was formerly a member of the Ecuadorian debt audit Commission in 2007-2008.