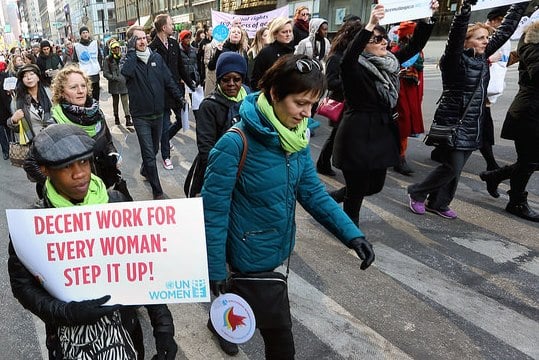 The IMF released a staff discussion note (SDN) in February, examining the effect of legal restrictions on female labour force participation. In a February blog accompanying the report IMF managing director Christine Lagarde detailed how laws “conspire against women to be economically active”. Fair play, the SDN by Christian Gonzales, Sonali Jain-Chandra, Kalpana Kochhar and Monique Newiak, analysed the World Bank’s Women, business and the law indicators, which cover 143 economies, over the period 1960 to 2010 found that “legal equality in economic rights”, including equal property rights, and women’s right to obtain a job “significantly contributes to explaining the variation of labour force participation gaps across countries and time.” The SDN stated that it does not take a normative stance on women’s participation, however, it emphasised that its policy recommendations with “respect to creating equal opportunity should be considered against the backdrop of countries’ broadly accepted cultural and religious norms.”

A previous 2013 gender SDN from the Fund also heavily promoted by Lagarde, only merited a single paragraph reference in a later guidance note on jobs and growth, published the same month. A guidance note is issued by the Fund to enable its staff to operationalise policy decisions. More recently the Fund has taken it’s gender work forward by choosing one to two countries per region where it plans to undertake focused work on gender issues in the context of the Article IV consultations in 2015. In March the the Fund published the first of these papers on India, in which it stated both that India was “on track” to meet the Millenium Development Goal on gender equality but that “overcoming gender inequality” is still an “outstanding concern”. The IMF has also launched an internal knowledge exchange website to guide staff on data and literature sources, and other analytical tools on gender.

Civil society gender advocates have highlighted additional factors that also obstruct women’s participation in the labour market. A March report by UK-based Gender and Development Network (GADN) pointed to “legal constraints” on women’s economic equality. It stressed the influence of “social norms around ‘women’s work’ and unpaid care that justify low pay, limit organising, and reinforce occupational segregation.” The report went on: “Failure to acknowledge and address the ways in which neo-liberal policies have undermined gender equality in general, and women’s economic empowerment specifically has … also been a major omission” from global interventions.

[The IMF] must also tackle deeper, structural issues, including the macro-economic policies that it has often itself pushed through its structural adjustment programmes which have caused, perpetuated and depended on women’s economic and social inequality. Jessica Woodroffe

Jessica Woodroffe of GADN said: “The IMF’s emphasis on removing laws that impede women from taking up opportunities in the workplace is welcome. However, to get to the root of the problem it must also tackle deeper, structural issues, including the macro-economic policies pushed through its structural adjustment programmes which have caused, perpetuated and depended on women’s economic and social inequality. For over 20 years, womens’ rights organisations have been calling for these to be addressed, yet little has changed.”

The World Bank has also talked up gender equality. In February its gender director Caren Grown called 2015, the 20th anniversary of the groundbreaking 1995 Beijing Conference on Women, “the year for action on gender equality”. She highlighted the need to create “levers for transformation”, including “more and better jobs for women” and “closing gaps in ownership of land”.

Critics claim the Bank’s standards do not match its rhetoric. Its draft social and environmental framework to replace the safeguards currently under review, contains no gender safeguard (see Bulletin Sept 2014). In February, the Nobel Women’s Initiative, an NGO representing women Nobel Peace Prize winners, wrote to Bank president Jim Yong Kim warning that the absence of a gender safeguard “risks excluding [women] – often society’s poorest and most marginalised – from benefitting from or contributing to its projects and/or programmes.”

A February letter signed by over 45 global organisations and individuals, including the Kenyan National Gay & Lesbian Human Rights Commission and UK NGO Stonewall and called on the Bank to ensure the next draft of the safeguard framework “systematically and proactively – address the unique impacts of each project on women, girls, and gender and sexual minorities, as well as additional impacts these people experience because of other forms of discrimination or marginalisation that they face.”