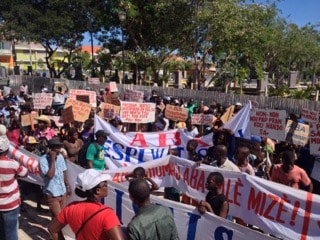 Despite civil society criticism of World Bank-supported large-scale mining activities, the Bank is still involved in controversial extractives projects (see Observer Summer 2014, Bulletin Dec 2013). Local and international campaigners argue that, through technical assistance, the Bank facilitates the opening up of countries’ extractive industries to transnational companies over supporting domestic industry; and doing so without providing governments with the tools to adequately protect marginalised communities against harmful social and environmental consequences of projects originating from Bank technical support.

Since 2013 the Bank has provided technical assistance to the Haitian government in drafting new mining laws intended to increase foreign investment in the sector under the Extractive Industries Technical Advisory Facility (see Bulletin Dec 2013). In March, a letter to Bank president Jim Yong Kim, signed by 92 civil society organisations and individuals, expressed deep concern that the Bank “is helping to develop Haiti’s mining sector, an inherently high-risk industry, without applying any social or environmental standards to ensure transparency and meaningful public participation.”

The letter follows an appeal filed in January to the Bank’s accountability mechanism, the Inspection Panel (IP), over concerns that the new legislation had been drafted without public consultation, in violation of its own policies. The request by the Haiti Mining Justice Collective and mining-affected communities argued that “mining exploitation has never contributed to the development of Haiti,” and express concern about the “exclusion of Haitian people from the law reform process, particularly when contrasted with the reported regular participation of the private sector.”

They support an industry that has created social conflict as a result of how mining competes for space, water and territorial controlHonduran National Coalition of Environmental Networks and Organisations (CONROA)

While acknowledging the concerns as “serious and legitimate”, the IP rejected the appeal in February because the Bank support is financed through a Bank-Executed Trust Fund (BETF) “to which Bank operational policies and procedures … including the safeguard policies, are not applicable”, rather than a Recipient-Executed Trust Fund (RETF), where the Bank’s policies apply (see Observer Spring 2015). The IP noted that the Bank’s “decision to execute a complex TA [technical assistance] such as this one under a BETF as opposed to a RETF … does not seem to be proportional to the level of environmental and social risks involved in the TA.”

The March letter demanded that a policy review be “undertaken with a view to closing the current loopholes in World Bank policies, to ensure that the application of social and environmental standards is mandatory and never left to the discretion of the Bank’s project teams or dependent on the particularities of the funding vehicle.”

The Bank, alongside the Canadian International Development Agency is also facilitating the expansion of the mining sector in Honduras. It signed an agreement in February with the government that will double mining exploration in the country, a move projected to increase private profits from $300 million to $5 billion annually.

The Honduran National Coalition of Environmental Networks and Organisations (CONROA) demanded that the Bank prioritise investment in local coffee farmers over mining companies. They also demanded that community consultation be made binding before any mining activities take place in an area. A public declaration released at the time of the agreement stated: “Far from protecting mining-affected communities, the mining law puts them at a disadvantage compared to the freedom with which companies operate … [the Bank] support[s] an industry that has created social conflict as a result of how mining competes for space, water and territorial control. … Mining has not contributed to development in any country, given that the income and few jobs that this activity generates do not compensate for the environmental and social impacts.”

In July 2014, the Compliance Advisor Ombudsman (CAO), the accountability mechanism of the International Finance Corporation (IFC, the Bank’s private sector arm), received a second complaint regarding the IFC’s investment in the Amulsar gold mine in Armenia operated by UK Channel Islands-based Lydian International (see Observer Summer 2014). IFC is a 7.9 per cent shareholder in Lydian and has invested over $16 million in stages since 2007.

According to the IFC, the project is expected to move into the development and construction stage with first gold production expected in early 2017. It is classified as Category B, meaning it is “expected to have limited adverse social and/or environmental impacts that can be readily addressed through mitigation measures.” The complaint, filed by 148 local residents, includes allegations of lack of information about land acquisition and resettlement plans; potential cyanide contamination; dust pollution affecting agriculture; and insufficient community engagement. The community demanded “that the IFC stops sponsoring this felonious operation, since it has destructive effects on the population of Gndevaz. We demand that our opinion be considered and our rights not be violated.”

In early March the parties agreed to participate in a CAO dispute resolution process, seeking a collaborative solution. The first complaint moved to the CAO compliance function in December 2014, the purpose of which is to review the IFC’s environmental and social due diligence.