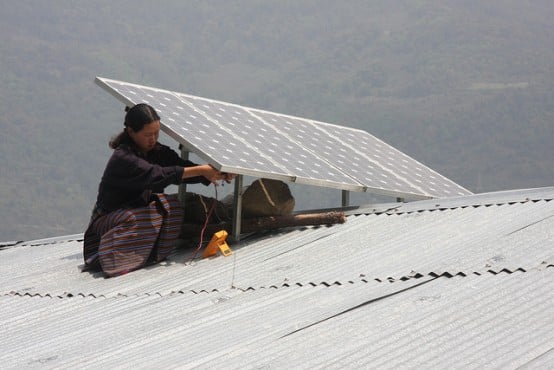 During the November 2014 CIFs meetings the UK and Norway announced further pledges to SREP. The UK announced up to £168 million ($263 million), with final allocation depending on progress in programming the new resources. Norway pledged NOK 150 million ($22 million) to support investment plans from new pilot countries and private sector engagement.

Following the June 2014 agreement of 14 new countries joining SREP (see CIFs Monitor 10), the SREP sub-committee requested that the CIF administrative unit work with the MDBs to prepare a proposal with options for the development of investment plans by the new countries, including indicative funding levels and implications for the overall funding levels, while taking into account over-programming. The sub-committee also asked MDBs and pilot countries to explore the possibility of using investment plans and projects “as a platform for countries to access other climate finance sources, including the GCF.”

Prior to approval Switzerland asked for clarification on whether Mongolia and Yemen, who are on the SREP reserve list, would have priority over the new pilot countries. Furthermore: “Assuming that the additional funds from UK are capital/concessional loans and not grants … we are likely to face a stringent limitation of grant money. How should the (expected large) discrepancy between needed/requested and available grants be addressed?”

The CIF administrative unit confirmed that Mongolia and Yemen are not subject to the ‘first-come first-served’ principle, but that the sub-committee could decide to “provide a reasonable timeframe or deadline … to submit their investment plans for endorsement.” On grant resources, the CIF administrative unit is working with the MDBs on a proposal “regarding the parameters that can be used for distributing grant and non-grant resources to the new set of 14 pilot countries.”

The US also raised concerns: “we think that the proposed envelope of allocations for the 14 pilot countries will generate unrealistic expectations about how much funding will be available in the next two years … we believe that transparency about the potential availability of SREP resources is essential to ensuring that countries can plan and prioritise programmes appropriately.” The CIF administrative unit responded that they have changed the language in the proposal to manage expectations.

The investment plans for Ghana, Haiti and Nicaragua will be discussed in the May sub-committee meeting.

The SREP results report was released for the November 2014 sub-committee meeting, reporting back on the revised results framework agreed in 2012. The report covers the period from the first SREP project approval in December 2011 to June 2014, when seven projects in five pilot countries had been approved. It included a caveat that due to the early stage of implementation only one project has reported results so far, and the report is therefore limited to outlining “the monitoring and reporting process briefly and the expected results of the projects/programmes”. The 2015 report will “assess the progress of SREP projects/programmes against overarching programme targets as indicated in the SREP investment plans.”

Under SREP’s results framework all countries are expected to contribute to at least one of the two core indicators, apart from projects with a primary objective “to strengthen the enabling environment for investments in clean energy and energy access.” All projects and programmes shoud also develop “co-benefit indicators that reflect the broader impact of the SREP-funded interventions in the country”, however, reporting on these is not required on an annual basis.

The two core indicators for SREP projects are:

Examples of co-benefit indicators include:

A toolkit is available for SREP monitoring and reporting, which will be reviewed in the light of the experience of the first round of reporting.

Switzerland raised a number of comments and questions for clarification, including: “The expected result of giving access to modern energy services to 156,800 people with this rural electrification project is not well justified and seems exaggerated.” They also noted: “The leverage factor of 1.4 is very low in comparison to other SREP investment plans … In this respect, the [investment plan] lacks ambition.”

Vanuatu responded that they estimated that 9,510 households would connect to and benefit from the micro/mini grids, and 22,190 from the plug and play solar systems, with each household consisting of on average five people. They added “estimates do not include the benefits of improved health care and education arising from improved and sustainable electrification of public facilities.” On the leverage factor it noted “there are other priorities that compete for the grant and concessional funds and the government’s capacity to borrow may also be limited. This is the reason why the government has requested that all SREP funds be provided as a grant.”

Kenya: question on incentives for diesel

SREP funding “will support the implementation of off-grid electrification solutions in villages in rural areas where connection to the national grid is economically unviable in the short and medium term. Electrification of these villages will be through mini-grids, combining renewable resources (solar or wind) and thermal units. This sub-component will pilot public-private-partnership (PPP) arrangements.”

Switzerland asked: “The leverage factor for the SREP contribution … is much lower than announced in the [investment plan] … Please explain.” Furthermore: “There is some concern that the concept of passing-through the diesel fuel costs creates an incentive to use the diesel generators as much as possible. This is not aligned with the objectives of maximising the output of RE [renewable energy] and should be addressed in some way. Please explore a solution.” They also raised concerns about the high costs, including for solar PV generating units.

The UK seconded the cost concerns and added: “[we] find the approach to the allocation of public and private resources to be unclear.”

The IBRD clarified that while the co-financing from MDBs and other development partners has decreased, they expect the private sector share to increase. On diesel incentives: “Fuel pass through is meant to recover actual fuel costs incurred based on predetermined maximum specific fuel consumption of diesels, which will be quoted by bidders and guaranteed … there is no incentive to dispatch more fuel based generation.” Furthermore: “Cost assumptions are conservative and aligned with investment costs exhibited in existing and similar mini-grid systems in Kenya.” On public vs private resources, “the final design of the off grid investments, together with the main principles for allocating grant subsidies to [independent power producers], will be determined upon completion of the ongoing pre-feasibility work which is carried out jointly between the WB and IFC”.

The programme “will be used to provide risk-sharing instruments (first-loss guarantees mainly, and co-financing resources in certain cases) for loans from IDB and/or other financial institutions, improving the credit profile of the projects and allowing their implementation through access to appropriate finance. … Additionally, these projects will help establish local engineering capacity for their technical design, catalyse the development of supply chains for equipment procurement, and demonstrate the market potential to local financial institutions.”

The UK raised several concerns: “We think the expert groups’ previous reservation on the project remains valid. The SREP funds will be deployed to protect IDB not the private sector players who are required to raise 50 per cent of the total project cost on their own.” Furthermore, “the expected annual MWh savings (45,000 MWh) are about half of what was indicated in the original concept (80,000 MWh).” Moreover:

“Gender considerations are not very fully developed in the proposal, and an implementation strategy on gender … should be developed for the programme, as well as ensuring adequate gender/social development expertise within the project implementation team and evaluators.”

The IDB responded that “risk should not be looked at in isolation, without considering reward: while SREP guarantees will be providing direct protection to IDB primarily, the financial beneficiary … will be the final borrower, because the IDB will ensure that any reduction in the interest rate is passed on to the final borrower. The borrower’s higher risk-taking is matched by higher returns.” On the revised figures on MWh savings: “The expected annual output from renewable energy is based on a pipeline of feasibility studies conducted to date in Honduras.” On gender: “The IDB’s Gender Action Plan for Operations 2014-2016 sets strategic priorities for private sector windows to promote the implementation of inclusive policies in private entities.”

SREP has 27 pilot countries, including one region. Six countries were selected in 2010: Ethiopia, Honduras, Kenya, the Maldives, Mali and Nepal. All the investment plans of the original pilot countries have been approved. A reserve list for new pilot countries has been agreed. In 2013 Tanzania and Liberia’s investment plans were approved and Armenia, Solomon Islands and Vanuatu’s plans in 2014. Two countries remain on the reserve list: Mongolia and Yemen. In 2014 a further fourteen countries were invited to join SREP: Bangladesh, Benin, Cambodia, Ghana, Haiti, Kiribati, Lesotho, Madagascar, Malawi, Nicaragua, Rwanda, Sierra Leone, Uganda and Zambia.