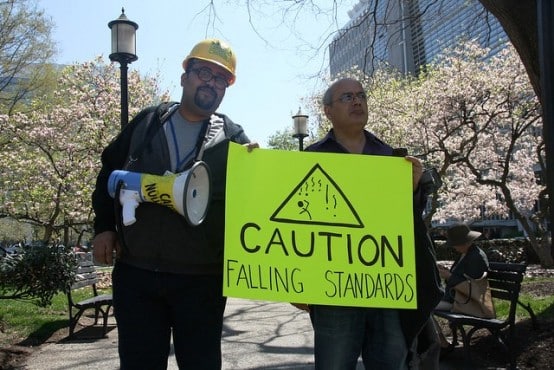 As the World Bank prepares to release the second draft of its proposed new environmental and social framework for consultation, civil society organisations (CSOs) have raised a number of concerns regarding the anticipated draft and the consultation process (see Observer Winter 2015, Autumn 2014, Bulletin Sept 2014). The new draft was discussed by the Bank board’s Committee on Development Effectiveness (CODE) in late June and early July, and subsequently approved for the third and final phase of public consultation, due to start in mid July.

Prior to the June CODE meeting a letter signed by 17 NGOs, including Alyansa Tigil Mina in the Philippines and US-based ‘Ulu Foundation, urged board members to “be vigilant” when reviewing the draft. The letter called the first safeguards draft “a dangerous weakening for the project-affected communities and the environment … [which] effectively dismantled thirty years of environmental and social protection.” Furthermore, the letter asserted that the draft “failed to achieve upward harmonisation with the strongest environmental and social standards of other multilateral and bilateral institutions”. The letter also expressed disappointment about the previous consultation phases, where “much of the input from civil society was neither properly recorded by the Bank, nor did it make much of an impact on the structure of the draft.” The signatories called on CODE to send the new draft back to Bank management if it contains “policy dilutions”. An appendix listed questions for CODE to consider while reviewing the draft, including whether the draft contains “highly flexible language linked to substantial policy dilutions and open ended compliance.”

A late May letter to the Bank’s safeguards team signed by 48 NGOs, including Ecological Justice in Indonesia and US-based Accountability Counsel, called on the Bank to “develop a consultation plan that secures meaningful input on the second draft of the environmental and social framework”. It observed that “the first two phases of consultations were marred by substantial problems”. It raised concerns that the Bank “is considering a truncated phase three consultation structure that would rely primarily on web-based consultations, over the course of as little as two months. A limited structure and timeline would be insufficient for interested parties to be able to review and digest materials and would run counter to the Bank’s commitments to transparency and citizen engagement.” The letter argued “that an adequate budget, and a minimum of six months’ time will be necessary to meaningfully consult stakeholders”. In a late June response, the Bank agreed that the next phase should be open and inclusive, but refuted the concerns arguing that its “approach to consultation meetings will follow the World Bank’s consultation guidance and international good practice.”

a dangerous weakening for the project-affected communities and the environment … [which] effectively dismantled thirty years of environmental and social protection.June NGO letter

In April a letter with 84 endorsements, including 56 indigenous peoples organisations, was sent to the Indian prime minister, calling India’s official response to the safeguards consultation “extremely problematic on a number of fronts”. This included a reference to free, prior and informed consent (FPIC) for indigenous peoples, which according to India’s response “can lead to legal complications, delays, increase in costs and delay in project execution. [The Bank] has not been able to explain how the new framework is simple, less onerous and burdensome on the borrowers, compared to the present safeguards policy.” The letter argued that India’s position “puts many of the country’s indigenous communities at serious risk of further loss of their lands and resources in the name of development without equity and protection of human rights”. It called on the Bank to ensure “that its revised safeguards reflect international standards in relation to indigenous peoples’ rights by maintaining this FPIC requirement.”