Shutting the spigot on private water: The case for the World Bank to divest 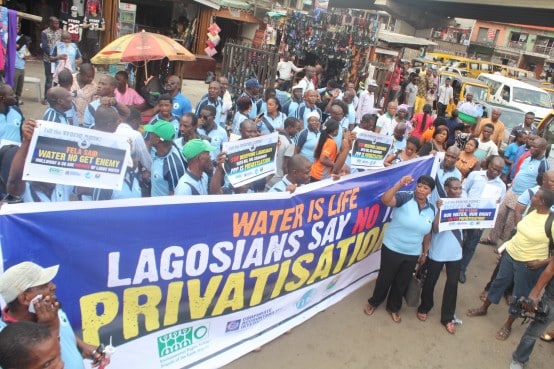 Failed World Bank policies promoting the corporatisation and privatisation of our water supplies have long threatened the human right to water. Nowhere is this more evident than in the mega-city of Lagos, Nigeria. In May, the world watched the peaceful transfer of power in Nigeria. While many eyes were on Muhammadu Buhari’s inauguration as president and his plans to strengthen the fight against Jihadist group Boko Haram, many of us also anticipate the new administration’s actions will have momentous implications for the human right to water in Nigeria.

Today in Lagos, 90 per cent of the city’s 21 million residents lack daily access to safe water. Millions rely on costly or unsafe water sources, such as poorly regulated wells and boreholes. For many Lagosians, water arrives not through pipes to their homes, but through shared standpipes – or worse, in jerry cans or cellophane bags from sources unknown to them, at a mark-up charged by those few who have access. For many, this presents an impossible choice between paying for clean water or paying for food, transportation, school fees, or clothing costs.

The World Bank holds much of the blame for the current state of affairs. For almost three decades it has promoted the privatisation of water systems in Nigeria, strong-arming water policy and impeding the development of adequate public systems.

the World Bank Group must abandon its harmful corporatisation and privatisation policies in favour of funding for the development of robust, accountable, and well-functioning public water systems

In 1988 and 1999, the International Finance Corporation (IFC), the World Bank’s private sector arm, advised the Lagos state government to “reform” the water sector and privatise Lagos State Water Corporation, the body charged with providing water to Lagos’s residents. Likewise, the Bank’s first National Urban Water Sector Reform project, instigated in 2002, drove privatisation which it misleadingly called “public private partnership” (PPP). The Bank’s plan failed miserably: it crowded out any effort to build a functioning public water system; profit-oriented water corporations had no interest in building the infrastructure we need. After the Bank’s plans fell through, its central recommendations were nevertheless folded into a 2004 law. Pushed through in secrecy despite opposition, the legislation corporatised Lagos’s water utility, paving the way to privatisation by prioritising bill collection, metering and profitability rather than universal access.

Despite hundreds of millions of dollars, the World Bank’s efforts in Nigeria have failed to put anything close to a functioning water system in place. According to a 2006 report by the World Bank’s own Independent Evaluation Group, the “failure of the Bank’s assistance to the Nigerian water supply sector” was evident in the fact that “seven out of seven projects had been rated as unsatisfactory, with unlikely sustainability and with negligible or modest institutional development impact.”

Moving forward with privatisation would pose an even greater danger. In June, 23 members of US Congress wrote to us: “We share your concerns that a move towards privatisation of the water scheme in Lagos, including PPPs, could leave the city vulnerable to the negative impacts historically associated with various forms of water privatisation, including rate hikes, worker layoffs, service interruptions, and failures to adequately invest in infrastructure.” The corporatised utility has already demonstrated some of these problems; a move to privatisation would only worsen the situation as seen in other cities in Africa and beyond.

Lagosians are fighting for our right to water. In Nigeria, people know firsthand the devastating health toll and environmental damage caused by transnational corporations in the oil and tobacco industries, and refuse to cede our water systems to profit-driven interests.

In order to make room for public water, the World Bank must stop pushing its privatisation agenda. We took a major step toward this last October, when a coalition of Nigerians and international allies successfully demanded that the IFC drop a proposal to attempt yet again to privatise Lagos’s water supply. But the Bank continues to push for corporatisation and privatisation. Projects prioritise bill collection and cost recovery policies that strain impoverished Lagosians but promise profit to water corporations. In August, civil society leaders and policymakers from around the world will gather in Lagos to share lessons and strategies to move Lagos – and cities around the world – toward universal access and democratic control of water. To do so the World Bank Group must abandon its harmful policies in favour of funding for the development of robust, accountable, and well-functioning public water systems. The Bank’s plan failed miserably: it focused on privatisation even though profit-oriented corporations had no interest in building the infrastructure needed for a functioning public water system.

Newly elected Lagos state governor Akinwunmi Ambode has promised to work for safe and affordable water, rekindling hopes for a new official policy that will promote public water systems that work. We look forward to collaborating with him in the coming years to stop the failed World Bank policies and fulfil the human right to water. Together we can develop a water system that is democratically accountable, publicly managed, and delivers to all Lagosians the clean, affordable water we need to live.

Shutting the spigot on private water: The case for the World Bank to divest