Just $6 a month? The World Bank will not end poverty by promoting fee-charging, for-profit schools in Kenya and Uganda 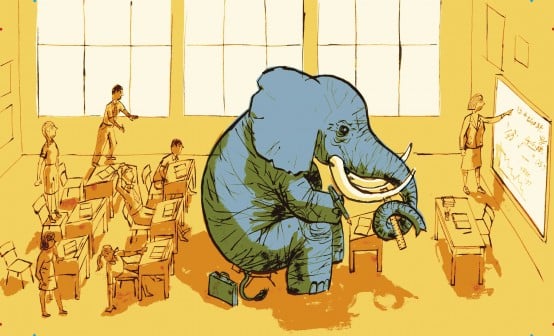 Following May’s Korea World Education Forum, co-convened by the World Bank, with targets to widen access and promote states’ domestic spending on education, questions have arisen about the Bank’s agenda for global education. The focus now moves to the July UN Financing for Development conference (see At Issue July 2015). This forum will, among other things, set the financial goalposts for the post 2015 framework: the sustainable development goals (SDGs), including an education goal, which will be agreed at the UN’s September SDG summit. However, one of the biggest questions remains: not what the education goal will be, or even the size of the financing envelope, but who will deliver the goals. The ‘elephant in the room’ that is being ignored remains the role of the private sector, given the World Bank and UN’s increasingly different visions of how the education goal should be met.

Meanwhile, the Global Partnership for Education (GPE), a multilateral partnership of governments, donors, civil society and including the World Bank, has been heavily courting the private sector. At a June event, at UK development think tank the Overseas Development Institute, GPE’s board chair and former Australian prime minister Julia Gillard regretted that the education community hadn’t “engaged with the private sector in a meaningful way”, and spoke of the lessons that could be learnt from the health sector’s engagement, including “how they involve the business community in the global supply chains”. She outlined areas that she believed were ripe for private sector support: “deploying books … technology which is integrated with the education model … teacher professional support, learning materials”.

On the eve of the World Education Forum the Bank pledged $5 billion for education. However, no details were revealed about where the funding would go, only that it was for “results based financing”, i.e. funds paid upon completion of pre-agreed targets, such as when children complete a certain educational grade level. The funding was immediately welcomed by Pearson, one of the biggest providers of low-fee schools in West Africa (see Bulletin May 2014). However, $5 billion appears to be a drop in the ocean; according to the UN Educational, Scientific and Cultural Organization there is an annual financing gap of $22 billion to meet the SDG education goal.

The World Bank has long endorsed and invested in low-fee education providers through its private sector arm, the International Finance Corporation (IFC), to fill this funding gap (see Observer Autumn 2014, Bulletin May 2014). Its stance has provoked widespread criticism, including from the UN’s Special Rapporteur on the right to education, Kishore Singh. Singh condemned the Bank’s support for private schools in a June report for the UN Human Rights Council: “Promoting for-profit education, the IFC considers laws as financial hurdles and provides guidance to private providers of education to be ‘very profitable and flourishing enterprises’. This is blatantly disrespectful of the human rights obligations of international bodies, including the World Bank”. Singh has spoken out on a number of occasions this year about the negative impact that low-fee private schools have on poor children’s educational access, including the role of the Bank in perpetuating the rise of such schools. Several UN committees have also recently highlighted the threat that private schools pose to universal education in Ghana, Chile and Uganda. A school run by BIA; Credit: Global Partnership for Education

Bank president Jim Yong Kim emphasised the Bank’s support for private schools in an early April speech in which he outlined the Bank’s “final push” to end extreme poverty. Kim backed the approach taken by private education providers, such as Bridge International Academies (BIA), impressed by their use of “software and tablets in schools that teach over 100,000 students in Kenya and Uganda”. He enthused that: “After about two years, students’ average scores for reading and math have risen high above their public school peers”, and that “The cost per student at Bridge Academies is just $6 dollars a month.”

Over 30 Kenyan and Ugandan civil society groups, such as Hakijamii in Kenya, and the Initiative for Social and Economic Rights, Uganda, said Kim’s statement “shows such a profound misunderstanding of the reality of poor people’s lives”. A joint May statement endorsed by over a hundred NGOs, including the Global Campaign for Education, pointed out that with “other costs for textbooks, payment transfers, or other items … the total monthly bill including school meals [for BIA schools] … ranges between $16 and $20” per child. The statement noted that: “The poorest families in Kenya today have three times as many children as a wealthy one”, therefore sending three children to a Bridge academy “would cost half Kenyan households [earning KES 7,000 ($75) or less] at least 68 per cent of their monthly income”. In practice this “means sacrificing another essential right for their survival, such as health, food, or water.” One resident of Mathare, one of the oldest informal settlements in Nairobi, Kenya, where BIA operate was quoted in the joint statement: “Bridge, they come here, but they don’t understand how things work. They don’t work with other schools, with the community. They just come from door-to-door to sell their product.”

Kim’s statement that BIA achieves superior results to public schools has also been widely disputed. The joint NGO statement emphasised that Kim’s claim is based on “data from a study conducted by Bridge itself.” In its May response to the NGO statement, the Bank said it is “supporting a rigorous, independent impact evaluation of the Bridge program in Kenya, the first large-scale randomised controlled trial of fee-paying schools in sub-Saharan Africa”. BIA, in its own response to the NGO statement, confirmed this study would “commence pupil tracking in January 2016”. BIA also asserted that: “Across Africa, teacher absenteeism and neglect rates are very high. The reality of the problems children face in getting an education need to be faced directly, as these are the problems that Bridge exists to solve.”

However, in a June post for The Conversation blog, Steven J Klees of the University of Maryland in the United States described the reality of the “new technology” which Kim celebrated: “Teachers in its schools are expected to all read aloud to the students, word-for-word, the content delivered on the tablet [provided to the teacher, not the students] at the same time in each school every day.” In Klees’ view “this teacher turned-robot barely deserves to be called education”. The NGO statement pointed out that although the World Bank, through the IFC, has invested $10 million in BIA it “has no active or planned investments in either Kenya or Uganda’s public basic education systems.” In its response to the joint NGO letter, the Bank stated that “support for Bridge Academies is complementary to what is offered in local school systems to ensure that parents who decide to invest in private schooling are also getting the best possible education for their children.”

Salima Namusobya of the Initiative for Socio-Economic Rights said: “If the World Bank is genuine about fulfilling its mission to provide every child with the chance to have a high-quality primary education regardless of their family’s income, they should be campaigning for a no-fee system in particular contexts like that of Uganda.”

Just $6 a month? The World Bank will not end poverty by promoting fee-charging, for-profit schools in Kenya and Uganda