At your own risk: Reprisals against critics of World Bank Group projects 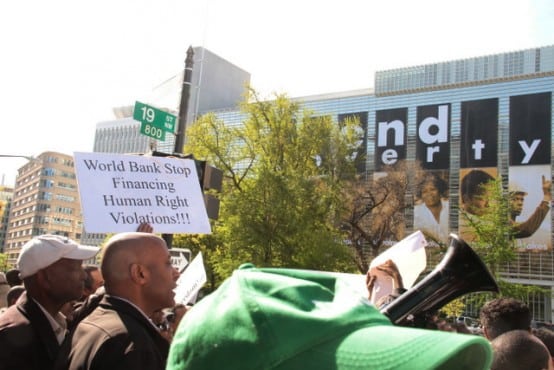 Protest in front of the World Bank. Credit: Joe Athialy

Almost a year since the World Bank started implementing its new strategy, questions have been raised about the safety of those that publicly criticise Bank projects and the adequacy of its accountability mechanisms. A June report by US-based NGO Human Rights Watch (HRW), At your own risk: Reprisals against critics of World Bank Group projects, outlined how the World Bank and its private sector arm, the International Finance Corporation (IFC), “failed to take adequate steps to help create a safe environment in which people can express concern or criticism about projects funded by the Bank Group without risk of reprisal.” The report found that in 18 out of 34 complaints to the Bank and the IFC’s accountability mechanisms, the Inspection Panel (IPN) and the Compliance Advisor Ombudsman respectively, the complainants “reported that they had been threatened or faced some form of reprisal that they believed was directly linked to their criticism” of a Bank or IFC project. However, in many cases “Bank and IFC officials failed to respond meaningfully to abuses.”

Using examples from countries, such as India, Cambodia, Uganda and Uzbekistan, the report argued that the Bank Group “has largely left victims to their fate, preferring silence or ‘quiet diplomacy’ over the kind of prompt, public, and vigorous responses that could make a real difference.” Jessica Evans of HRW said: “The World Bank has long said that public participation and accountability are key to the success of the development efforts it funds. But the World Bank’s repeated failure to confront intimidation or harassment of people who criticise its projects risks making a mockery out of these principles.”

Reacting to the report, the Bank published a simultaneous statement arguing: “When allegations of reprisal are brought to our attention we work – within the scope of our mandate – with appropriate parties to try to address them”, and highlighted a commitment to “incorporating beneficiary feedback in 100 per cent of World Bank-financed projects by 2018.” It outlined the different Bank accountability mechanisms available, including the new Grievance Redress Service (GRS) launched in April to address complaints for projects financed by the International Development Association (the Bank’s low-income country arm) and the International Bank for Reconstruction and Development (the Bank’s middle-income arm).

If the Panel does not overcome the image that it works largely for the benefit of the Bank itself, it may be seen as more akin to an internal audit procedure than a legal process.Yvonne Wong and Benoit Mayer

According to GRS team lead Qays Hamad: “The GRS is about resolving issues right when they happen and aims to provide faster and better resolution of complaints”. It commits to respond to the complainants within 30 days with a proposal on how the issues will be addressed, including a time frame. This proposal will be developed together with the parties that submitted the complaint. If the proposal is accepted the project team will work with the implementing agency to implement it and monitor the implementation until the issues are resolved to the satisfaction of everybody involved. If the proposal is not accepted the complainant will be referred to other remedy options, such as country authorities or the IPN. According to Hamad complaints that have been reviewed by the IPN as part of a full investigation may not be brought to GRS “so that the internal accountability mechanisms of the World Bank are not duplicated.”

In contrast to the IPN, the GRS is not independent of Bank management. It is also not restricted to issues of policy compliance, but can choose to accept complaints related to any problems with Bank-supported projects. The GRS has no formal relationship to the IPN, however, the process shares similarities with the IPN’s much criticised early solutions pilot due to be reviewed in 2015, which aims “to provide an additional opportunity for management and requesters to address the concerns about alleged harm raised in a request for inspection by postponing the Panel’s decision on registration of the request” (see Observer Autumn 2014). The Bank plans to review the GRS operating procedures after the first year of operation.

Problems with the Inspection Panel

The robustness of the IPN was criticised in an article in the February edition of The World Bank Legal Review by Burma-based legal consultant and academic Yvonne Wong and Benoit Mayer of the National University of Singapore. The authors argued: “Fundamentally, the very nature of the Panel – as essentially a fact-finding mechanism – falls short of what many actual or potential requesters expect: a reparation.” The authors criticised “the lack of participation by the claimants and the lack of transparency in the recommendations by management to the board”, which they believe can lead to a failure to address the claimant’s concerns. Moreover, “the Panel process does not include a mechanism for the claimants to appeal the Panel’s or the Board’s approved action plans. Consequently, where Panel reports or action plans do not align with claimants’ concerns, there seems to be little that the claimants can do.”

The authors also noted the Bank board’s ability to reject the IPN’s recommendations for inspection and proposed that the IPN resolution could be modified “to eliminate the Board’s authority to approve an investigation altogether. This would avoid the risk of intervention from the Board and reduce the politicisation of the Panel process”. Furthermore, “Panel members are elected by the executive directors on the recommendation of the Bank’s president. This method does not reflect the principles of transparency, public participation, and public accountability that are at the core of the Panel’s mandate.” They concluded that the IPN “does not achieve the degree of independence expected from a juridical mechanism, so attempts to enhance its independence can only promote its credibility and effectiveness.”

The authors noted: “The very existence of the Panel puts pressure on the Bank’s staff to be more conscious in complying with the safeguard policies and to supervise the Bank’s management, from the long-criticised ‘culture of approval’ to greater consideration of the negative consequences of its projects [but] … If the Panel does not overcome the image that it works largely for the benefit of the Bank itself, it may be seen as more akin to an internal audit procedure than a legal process. This view will remain as long as compensation is not provided for past damage (as opposed to a plan of action to avoid future damage) and as long as the costs suffered by the requesters are not covered by the Panel where a breach has been identified.”

At your own risk: Reprisals against critics of World Bank Group projects