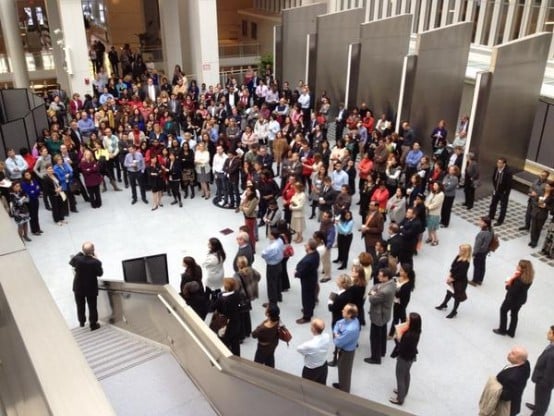 A series of reports by the World Bank’s Independent Evaluation Group (IEG) has raised further concerns over the Bank’s performance (see Observer Spring 2014), while internal staff discontent continues. The April IEG evaluation Results and performance of the World Bank Group 2014 reported that the Bank Group’s commitments have “increased amid significant organisational changes, but development outcomes of its lending portfolio continued to decline”. The report argued that this continues “a long-term, steady downward trend” of the performance of Bank-financed operations and International Finance Corporation (IFC, the Bank’s private sector arm) investments. According to the report: “For both the Bank and IFC, poor work quality was driven mainly by inadequate quality at entry, underscoring the importance of getting it right from the onset.” It concluded that the Bank Group “has to address some long-standing work quality issues to realise its solutions bank ambitions”, identifying areas for improvement, including “the long-standing issues of poor strategic selectivity and weak results chains.” The report noted that “many of the ongoing reforms are geared toward resolving the underlying problems” as part of the new World Bank strategy, which includes the introduction of 14 “global practices” and five “cross-cutting solution areas” (see Observer Winter 2014). It welcomed measures, such as addressing “shortcomings in the M&E [monitoring & evaluation] systems”.

Other IEG reports have also identified weaknesses in the Bank’s procedures and results. A two part series, Learning and results in World Bank operations, was released in July 2014 and June 2015. The 2014 report concluded that: “The range of knowledge sources used for preparing and implementing projects is more limited than it might be. Little use is made of sources external to the Bank and the range of Bank documents consulted is fairly narrow – economic and sector work is extensively used: Bank research, impact evaluations, and IEG reports less so.” According to the 2015 report: “in the majority of cases the outcome of interest, if achieved, could have been due to the Bank supported intervention, unrelated to it, or may have happened in spite of the Bank intervention.”

A May IEG report on the poverty focus of country programmes identified problems in the Bank’s analytical work on poverty, which “often does not adequately address the important social and political factors that contribute to poverty and impede efforts to reduce it.” The report noted that while the Bank is “a major contributor to the collection of credible data and improvement of methodologies to estimate poverty … progress is uneven across countries. Often data are most scarce where the challenges of poverty are most severe”. Furthermore, the report found that while “most of the Bank’s country strategies were developed through some kind of participatory consultations with government and nongovernmental stakeholders … in the majority of cases, there was no clear evidence that such consultations had a meaningful effect on the design or implementation of Bank strategies. In some instances consultations appeared to be more of a ‘box ticking’ exercise.” Moreover, while the Bank “generates information and learning about poverty reduction from its programmes” with requirements and processes through M&E “they are not always well implemented. The Bank’s feedback loops … have generally been weak with large variation across countries”.

in the majority of cases the outcome of interest, if achieved, could have been due to the Bank supported intervention, unrelated to it, or may have happened in spite of the Bank interventionIndependent Evaluation Group

Similar issues were identified in a May IEG report on World Bank support to early childhood development. According to the report: “Until investment occurs in longer-term monitoring of interventions, the Bank will not fully understand which interventions have sustained impact and greatest potential to stop the intergenerational transmission of poverty”. Furthermore, while the report noted that the Bank’s analytical work “fosters and awareness of the rationale to invest in people early”, it concluded that the Bank “lacks a strategic framework and an organisational structure to support a coordinated approach across global practices toward the development of children.” The report also pointed out that while the Bank’s 2012 World Development Report “highlights the importance of twin-generational approaches to women’s economic empowerment and support to their children’s development through quality childcare … synergies have not been established between the Bank’s work in gender and early childhood development.”

The April Bank results and performance report cautioned that “the ambitious, prolonged change process within the Bank Group has yet to produce the desired institutional clarity, streamlined processes, and enabling environment that motivate staff to strive for excellence.” It noted that staff feedback indicated that “incentives for improving work quality – if they exist – are not well-communicated. There seems to be relatively low awareness, even disbelief that high work quality by one individual can contribute to better development outcomes.” It advised that the problems “must be dealt with decisively as the change process is completed.”

The IEG’s learning and results reports also identified continued internal discontent at the Bank (see Observer Winter 2015). According to the 2015 report “Staff indicate … that lending pressure tends to crowd out opportunities for learning.” The report acknowledged that the Bank’s approach to performance evaluation, rewards and recognition is being overhauled under the reorganisation, but that little impact has been seen so far: “The first survey of staff in global practices and cross-cutting solutions areas (conducted in late September 2014) found that only 23 per cent responded favourably concerning opportunities for learning and professional growth.”

In interviews conducted towards the end of 2014, staff remained “doubtful that the incentive for learning and knowledge sharing will increase.” The Bank board’s Committee on Development Effectiveness in its response to the 2014 report “underscored the essential need for a culture shift in how management and staff learn from lending operations” and noted that “the Board has reiterated that without a cultural change in behaviour the structural changes will not have the intended impact.”

A June article by Devex confirmed that discontent remains, as the results of the delayed staff survey were revealed (see Observer Winter 2015, Spring 2014). Completed by 79 per cent of staff, only a third indicated “a clear understanding of the direction in which [senior management] is leading [the Bank Group]”. Furthermore, only 26 per cent of staff thought that senior management “creates a culture of openness and trust”. Both measures were down by nine per cent in comparison to the 2013 survey. The proportion of staff who indicated “confidence that the [Bank Group] will take action on the engagement survey” dropped by 11 per cent compared to the 2013 survey, to 34 per cent. In an internal message to staff the World Bank Group Staff Association called the results “sobering, humbling, embarrassing, humiliating, appalling”, and urged that they be addressed in a timely manner to avoid “serious institutional risk in terms of reputation, delivery and finances.”

The survey results follow the ongoing controversy over the internal investigation of Bank staffer Fabrice Houdart, accused of leaking internal documents. According to June media reports Houdart has been cleared of leaking a controversial draft of the Bank’s proposed new safeguards framework (see Bulletin Sept 2014), but has been demoted by the Bank for allegedly sharing a less sensitive internal document with an NGO. Commenting on the case in April, Kim said that the Bank has a “zero tolerance policy for retaliation in this and every other case”, however, many recognise Houdart as a whistleblower, who may have been singled out for being critical of the Bank’s leadership.