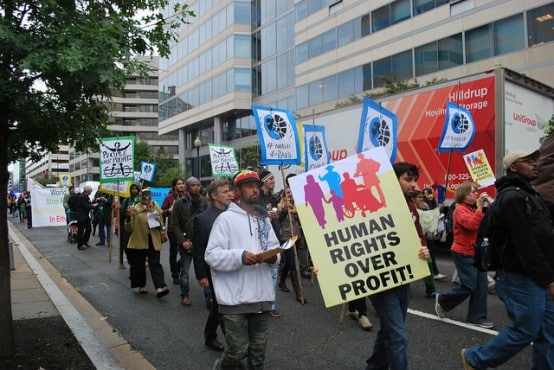 In early August the World Bank launched the third consultation phase of its proposed new environmental and social framework (ESF, see Observer Summer 2015), following the release of the second draft by the Bank board’s Committee on Development Effectiveness (CODE). According to CODE, “the focus of the consultations should be on gathering feedback on the implementability of the ESF in borrowing countries”. Nonetheless, 52 issue areas such as human rights, indigenous peoples, labour and working conditions, and land acquisitions, have been highlighted for discussion. The consultation format includes discussion on a dedicated online forum, implementation workshops and meetings with shareholders and stakeholders. The consultation will visit government departments and stakeholders in 30 countries. No end date has been provided. The outcomes will inform the third and potentially final draft of the framework.

The draft was met with a letter signed by 19 NGOs, including Earthlife Africa and Human Rights Watch, claiming the proposals “will vastly weaken protections for affected communities and the environment at the same time as the Bank intends to finance more high-risk projects”. The letter added that the current draft leaves substantial areas of the Bank’s portfolio, such as policy-based lending, uncovered by the safeguards. A June comment on the draft standards by the Bank’s accountability mechanism, the Inspection Panel’s (IPN), also raised this concern, with reference to a January request for inspection in Haiti. The IPN was forced to reject the request, despite considering the concerns “serious and legitimate”, since the project fell under a Bank-executed trust fund and is therefore not covered by the Bank’s operational policies (see Observer Autumn 2015, Spring 2015). The IPN called on the Bank to “harmonise the safeguards coverage” to more instruments in its lending portfolio: “the application of the policy framework should be based on a robust risk assessment of the potential environmental and social impacts … rather than the financing instruments used.”

Statements made public by groupings of World Bank executive directors (EDs) exposed further tensions within the institution. The Venezuelan ED,on behalf of eight countries, sought clarification on the practicalities of implementation on the ground, flagging “possible difficulties borrowing countries may face in complying with the new framework prior to implementation of a project, as well as during its operations.” The Indian ED, on behalf of five countries, called the draft a “disappointment” for developing countries and bound to “make doing business with the Bank more and more difficult and costly for the borrowers”. Instead he argued that “the national system should be preferred as long as they are substantially in accordance with the ESS.” However, Rayyan Hassan of NGO Forum on ADB cautioned about pushing responsibility to “potentially weak and inadequate borrower systems while eliminating the Bank’s mandatory due diligence requirements to ensure that borrower environmental and social protections are at least as strong as, and equivalent to, those of the Bank.”

the proposals "will vastly weaken protections for affected communities and the environment at the same time as the Bank intends to finance more high-risk projects."CSO statement

India’s statement went on to list a series of instances where it is argued that the language is indefinable and implementation costly or unrealistic, including with regards to labour laws, heritage, displacement, and free, prior and informed consent (FPIC), concluding that they see “an enormous expanse of areas with poorly defined standards making it difficult for borrowers to comply.” The statement called for “economic development” to be recognised alongside environmental and social development in the standards. On FPIC it argued that the requirement for consent rather than consultation “will create hold out problem depriving a larger number of people from the benefits of development.”

A first consultation meeting took place in late August in Angola with African governors of the Bank, largely focussing environmental and social standard 7 on indigenous peoples (ESS7). According to the Kenyan delegate the members of the African caucus have made a strong case to not apply ESS7 in the African context, and that the Bank should instead find a “much better terminology”. This so called “alternative approach” was heavily criticised during the previous phase of the consultation. A July 2014 statement by Soyata Maiga, chairperson of the African Commission’s Working Group on Indigenous Populations/Communities in Africa argued that: “The apparent resistance to the concept of indigenous peoples is in most cases based on misunderstanding that the concept would threaten national unity, give preferred rights to indigenous peoples and exacerbate ethnic tensions or block national development … The ‘alternative approach’ would … be in stark contradiction with the various policies, decisions and rulings of the Commission and that of the African Union.”