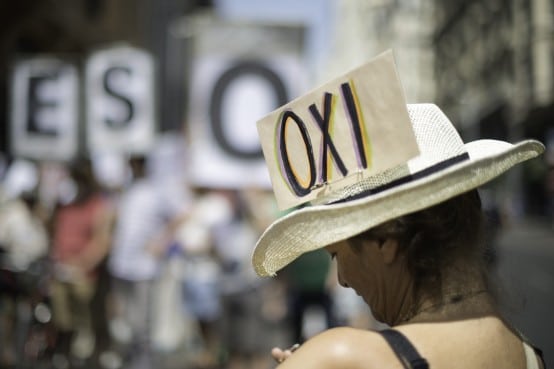 Supporter of No vote in Greek referendum, Madrid

In August, Greece and its European creditors, the European Central Bank and European Commission (the IMF’s ‘Troika’ partners), came to a third agreement in five years to provide an emergency financial package to Greece, worth up to €85 billion ($94 billion). The role of the IMF, which inputted into Greece’s negotiations with its European creditors, has provoked significant criticism from civil society and its own member states for undermining the negotiations by insisting that no leeway would be provided during negotiations to delay pending payments to the Fund, requiring that policies which the Greek public rejected in a June referendum would have to be implemented regardless, despite itself conceding that Greece’s debt is unsustainable.

IMF in Greece: unwelcome from the start?

At the outset of the Greek financial crisis in 2010 (see Update 71), the IMF sought to be involved with the financial support package to Greece and other Eurozone countries, such as Ireland and Portugal, despite some hostility from senior European officials. According to an August article by news agency Reuters, in 2010 French President Nicolas Sarkozy reportedly stated that “I will never allow the IMF in Europe”. However, according to George Papakonstantinou, Greece’s finance minister from 2009 to 2011, the IMF was involved because of the credibility it offered, saying “the only thing that could convince the markets would be the IMF.”

A June 2013 internal Ex Post assessment (see Update 86) of the first Troika agreement with Greece in 2010 found that the Fund had participated in the Greece package in order to enable a “holding operation” to enable other European states to limit the fallout from the Greek crisis, in particular to their banking systems. This required that the Fund create an exception to its requirement that if lending to any member there is a high probability that the Fund will be repaid. Despite this acknowledgement the Fund advocated drastic cuts to Greek public spending. Evangelos Venizelos, Greece’s finance minister from summer 2011, described the cuts as politically, not economically, driven: “[the Troika] insisted on measures that were acts of cruelty to make us prove to them that we were prepared to pay the political cost,” he told Reuters.

In June, the Greek government, which had been elected in January on a platform of renegotiating the conditions of the existing Troika agreement, announced that it had exhausted attempts to renegotiate the conditions of the package. In the same month it required all banks to close due to its financial predicament, initially for a week. While negotiations with creditors continued, limits were placed on access to cash for citizens and businesses. The government also indicated that it had insufficient financing to repay €2 billion of payments to the IMF for its 2012 loan package due in July (see Update 83) and that it would be holding a late-June referendum to seek public backing to reject the bailout conditions on offer. Though the non-repayment to the IMF was widely called a default, in reality it initiated the IMF’s arrears procedure which can eventually culminate in expulsion of a member-state from the IMF for non-repayment.

The IMF, despite its ‘junior status’ in the Troika since the outset of the Greek programmes (see Observer Autumn 2013), intervened in crucial moments of the negotiation between the Greek government and its European creditors. Despite an overwhelming rejection of austerity in the referendum, the IMF and its Troika partners insisted on even greater spending cuts and reforms while continuing to rule out debt forgiveness. In response to reports that there would be a softening of austerity conditions to respect the referendum outcome, IMF managing director Christine Lagarde made a statement in late June reiterating that “I continue to believe that a balanced approach is required … with appropriate structural and fiscal reforms supported by appropriate financing and debt sustainability measures.”

The IMF then further complicated the negotiations between Greece and its creditors by releasing a preliminary Debt Sustainability Assessment (DSA) in July stating that Greece’s debt dynamics were indeed “unsustainable”. Nevertheless it argued that “if the package of reforms under consideration is weakened further – in particular, through a further lowering of primary surplus targets and even weaker structural reforms – haircuts on debt will become necessary”, where haircuts implies that creditors would have to forgive a portion of the money owed to them, something which Greece’s European creditors had categorically ruled out in repeated public statements. However, less than two weeks later the IMF updated its DSA to conclude even more strongly that “Greece’s debt can now only be made sustainable through debt relief measures that go far beyond what Europe has been willing to consider so far” attributing this change to the “easing of policies during the last year” and to “the recent deterioration in the domestic macroeconomic and financial environment because of the closure of the banking system adding significantly to the adverse dynamics.”

The IMF did not blame its own policies for Greece’s predicament, saying “if programme policies had been implemented as agreed, no further debt relief would have been needed to reach the targets under the November 2012 framework.” Nevertheless, Fund managing director Christine Lagarde stated in August that if Greece implemented the agreed reforms, including spending cuts and “significant debt relief” that this “will provide the basis … needed for me to recommend … further financial support for Greece.”

The Greek government succeeded, with support of opposition parties, to receive parliamentary approval for the new loan agreement in August but subsequently resigned, triggering a September general election. The government’s successful re-election was followed immediately by a pledge from Prime Minister Tsipras to secure further debt relief alongside implementation of the IMF-approved loan conditions. The loan conditions include requiring significant increases to value-added tax (VAT), a privatisation fund to be provided €50 billion worth of national assets, a reversal of the government’s restoration of collective bargaining rights and commitment to raise minimum wages and a process of vetting by the creditors of any new legislation. The Memorandum of Understanding with European creditors, in which the IMF indicated it had provided support and “input”, requires that “no changes to the current collective bargaining framework will be made before the review has been completed.” Ben Chu, writing in UK newspaper the Independent in July interpreted this to mean that “the IMF has also clearly not learned its lesson on the economic impact of austerity either. The Greek economy is back in recession again but the Fund is still demanding public pension cuts and VAT increases.”

Nick Dearden of UK NGO Global Justice Now! argued in an August blog that the terms of Greece’s privatisations showed that “the privatisations aren’t to do with helping Greece … it makes no sense to sell off valuable assets in the middle of Europe’s worst depression in 70 years … the vast majority of the funds raised will go back to the creditors in debt repayments, and to the recapitalisation of Greek banks”. Indeed, of the €85 billion loan, €54 billion or over 60% was earmarked to refinance existing debts, with €25 billion committed to recapitalising failing Greek banks.