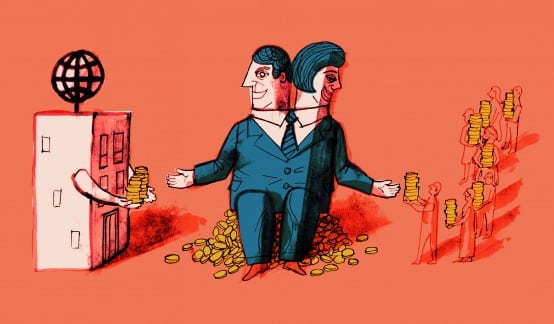 In the aftermath of the 2008 financial crisis and the resulting pressure on public resources, public-private partnerships (PPPs) have become a key pillar of development strategies, including those of the World Bank (see Observer Autumn 2014). As argued by Nancy Alexander of German political foundation Heinrich Böll, mega infrastructure projects financed through PPPs are now considered the recovery’s silver bullet, including among developed countries (see Observer Winter 2015).  These trends are evidenced by the threefold increase in World Bank support to PPPs from 2002 to 2012 and its establishment of the Global Infrastructure Facility in 2014 (see Bulletin Nov 2014) which has as its objective to facilitate the “preparation and structuring of complex infrastructure PPPs to enable mobilisation of private sector and institutional investor capital.”

Given that one of the explicit objectives of the World Bank’s strategy is to “promote public-private partnerships” and that PPPs would comprise a cross-cutting solutions area (see Observer Autumn 2015), the World Bank’s Independent Evaluation Group (IEG) in 2014 published an evaluation of the Bank’s effectiveness in “supporting countries to use PPPs” (see Observer Autumn 2014). While the evaluation failed to consider the democratic governance implications of these ‘partnerships’, something raised by Eurodad in its July report on PPPs, it nonetheless warned that “contingent liabilities for governments that emerge from PPPs are rarely fully quantified at the project level” and highlighted that despite the Bank’s poverty eradication objective “it cannot … be assessed how far PPPs benefited the poor as large data gaps exist.”

Concerns about the risks associated with PPPs have also been acknowledged by the IMF, which in 2014 developed a PPP Fiscal Risk Assessment Model (P-FRAM). In its summary brochure on the P-FRAM, the Fund notes that the tool was developed “to assess the potential fiscal costs and risks arising from PPP projects”, noting that “in many countries, investment projects have been procured as PPPs not for efficiency reasons, but to circumvent budget constraints” thus resulting in the procurement of “projects that either could not be funded within [governments’] budgetary envelope, or that exposed public finances to excessive fiscal risks.”

In March the World Bank’s Public Private Partnership in Infrastructure Resource Centre (PPPIRC) identified 10 important risks associated with PPPs, including that “development, bidding and ongoing costs in PPP projects are likely to be greater than for traditional government procurement processes” and that the “private sector will do what it is paid to do and no more than that”, thus putting into question the extent to which governments should count on the willingness of the private sector to go beyond its profit motive and to act in support of sustainable development outcomes. Yet, in the webpage introduction of its PPP reference guide 2.0, developed jointly with the Asian Development Bank, the Bank notes “PPPs, are increasingly recognised as a valuable development tool by governments, firms, donors, civil society, and the public. The reason is straightforward: all over the world, well-designed PPP transactions have delivered quality infrastructure and services, often at lower cost, by harnessing private sector financing, technical know-how, and management expertise.”

Despite the inclusion of caveats and cautions in World Bank documents, such as the reference to ‘well-designed PPP transactions’ qualifier above, civil society organisations remain sceptical of the willingness of the Bank, in the words of Nancy Alexander, to “relinquish their bias in favour of PPPs in favour of an even-handed assessment of PPPs versus public works”. The current unease about the apparent contradiction between the Bank’s research findings and more cautious public statements, and its investments and policy advocacy mirror concerns raised nearly a decade ago by the Bank-commissioned 2006 independent evaluation of Bank research. The evaluation criticised the Bank for giving internal research favourable to Bank positions “great prominence” while ignoring “unfavourable” research and was also critical of the Bank’s use of its research “to proselytise … Bank policy, often without taking a balanced view of the evidence, and without expressing appropriate scepticism”. It additionally identified “a serious failure of the checks and balances that should separate advocacy and research.” The lack of integration of critical views at the country level is echoed by the IEG’s 2013 client survey, which found that “only 6 per cent of [field based staff] … frequently read IEG reports”.

Summarising the findings of IEG’s 2014 evaluation of learning at the World Bank during a presentation in London in June, Marie Gaarder, manager of IEG’s public sector department, concluded that most of the Bank’s Implementation Completion and Results reports “lack rigorous evidence on the extent to which observed outcomes can be attributed to Bank interventions” and that “the Bank’s project performance assessment system is not a reliable source of evidence of outcomes.” Considering the incentive structures that impede learning at the Bank, the evaluation noted that “about 70 per cent of respondents to IEG’s survey of Bank staff feel that the pressure to lend has crowded out learning” (see Observer Summer 2015).

Despite these concerns, the Bank and other multilateral development banks (MDBs) continue to push PPPs through a variety of channels, including a “PPP knowledge lab” and dedicated “PPP Days”. An August report titled Partnering to build a better world, internally produced by MDBs for the G20, focused on MDB cooperation in encouraging private sector investment in infrastructure. The report details the depth of MDB cooperation on PPPs and provides additional evidence of the extent to which views critical of PPPs are ignored.

The International Finance Corporation (IFC), the World Bank’s private sector arm, runs an online course on PPPs and publishes the Handshake magazine, the World Bank’s journal on PPPs that “explores how the public and private sectors can together address complex global challenges.” Despite the fact that PPPs in health and education  have been severely criticised (see Observer Summer 2015) and water privatisation schemes have been reversed in many cities (see Observer Autumn 2015), the IFC continues to identify these sectors as priority areas for their PPP investments and technical support.

In its 2015 report on the poverty focus of World Bank country programmes, the IEG referenced its 2011 evaluation of IFC’s poverty impact, which found that its measurement and evaluation framework “did not quantify benefits to the poor and there were no indicators for measuring a project’s effect on poverty” and that “the majority of investment projects generated economic returns but did not provide evidence of identifiable benefits to the poor.”

Aldo Caliari of US-based NGO Center of Concern said: “We see this pattern again and again, Bank evaluations and analyses question the way it does things with no perceivable changes on the ground. Now the Bank is in the business of producing myriad tools to ‘help countries do better PPPs’ and we wonder: how can it truly help countries when it so clearly fails to incorporate internal learning and the incentives remain so skewed in favour of lending?”