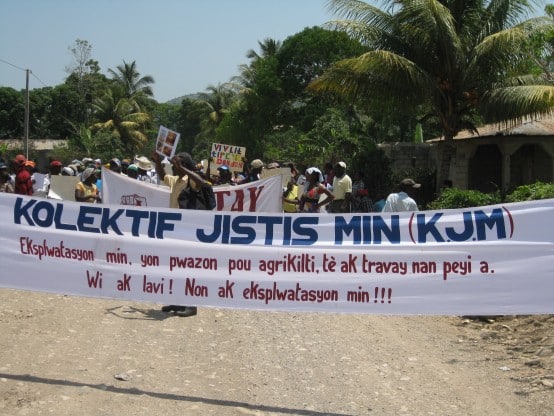 by Peterson Derolus and Caitlin Daniel, with additional input from Nixon Boumba

If you ask the average Haitian, they probably do not know of their government’s plan to develop the country’s gold deposits through a formal mining sector. For over two years the government has been advancing a strategy to bring foreign mining companies into Haiti, yet hardly any information has been made public about a decision that will likely have sweeping implications for people throughout the country.

The World Bank has supported a key element of this effort by providing assistance to draft a new national mining law. In early 2013, the Haitian parliament placed a moratorium on mining amid accusations of corruption in the granting of mining permits under the current mining law. Investors and mining companies are now waiting for the updated law before resuming operations.

The social and environmental implications of the Bank’s assistance are staggering, as the draft law, if passed, will determine the rules and regulations for all mineral mining in Haiti. Nonetheless, the Bank’s involvement has utterly failed to produce a fair and transparent consultation process. While private mining companies have been invited to provide input on the draft law, Haitians – including groups such as the Justice in Mining Collective that track mining issues in Haiti – have been largely excluded from the conversation.

For over two years the government has been advancing a strategy to bring foreign mining companies into Haiti, yet hardly any information has been made publicly available about a decision that will likely have sweeping implications for people throughout the country.

Proponents of developing Haiti’s gold reserves stress that economic growth and job creation will naturally flow from the establishment of large, open-pit gold mines. Haitians who have felt the impacts of mining exploration, however, are sceptical. Earlier interactions have led them to associate mining companies with false promises. Now they demand a stronger mining law that will protect communities and their environment.

A “final draft” of the law, leaked last November, deepened fears that the government’s plans will do little to protect local communities. The draft law leaves most environmental protections to future regulation, sidestepping serious questions on managing limited water resources and protecting fragile and degraded ecosystems. It also seriously limits the government’s ability to regulate mining by allowing projects to bypass the environmental approval process if the environment ministry fails to finish its review in a specified timeframe – a prospect that is all too likely in a country where lack of funds, poor capacity and corruption regularly lead to government inactivity and long delays.

Many in and outside of Haiti worry that the World Bank’s assistance has failed to address the hurdles to developing such a high-risk industry in a country with a notoriously weak regulatory system. While one of the Bank’s stated goals was to improve the government’s ability to manage the mining sector, it has made no identifiable contributions to increase regulatory capacity.

Despite concerns with the draft law and government capacity, the World Bank’s assistance in developing Haiti’s mining sector is intended to instil confidence in would-be investors. The World Bank Group itself also stands to benefit. In 2010, the Bank’s private-sector arm, the International Finance Corporation, made an equity investment in Eurasian Minerals, one of the companies that have conducted exploration in Haiti. With this investment still in place, the Bank has an interest in speeding the passage of a new law to ensure the mining sector is reopened, raising conflict of interest concerns surrounding their role in developing the draft law.

A January 2015 complaint by affected communities and the Justice in Mining Collective raising these issues to the World Bank’s accountability mechanism, the Inspection Panel (IPN, see Observer Spring 2015), did not get far. Rejecting the case, the IPN deemed that none of the Bank’s social and environmental safeguards apply because the Bank’s assistance was channelled through a Bank-executed trust fund (see Observer Spring 2015). This loophole blocked communities from holding the World Bank to account for its role in developing and legitimising the flawed mining law. It prevented Haitians from obtaining remedy, even though the IPN itself acknowledged the severity of the issues raised.

Whatever the technical reason for this outcome, some Haitians view the IPN’s rejection as a signal that mining companies and the Haitian government may continue to develop the mining sector without fear of being held to account for inadequately protecting local communities. Others have taken it as a signal that they must redouble their own efforts to organise and attract the attention of the government and other decision-makers.

With the IPN process closed to them, communities are faced with dwindling options. Haiti’s parliament dissolved in early 2015 after the government failed to hold elections, calling into question whether the draft law will be approved through a democratic process. Elections are underway for a new president and parliament which may determine the future of the draft law. Until then, the only constant is confusion: about the status of the draft law within Haiti’s bureaucracy; when and how it may be advanced; and where communities can turn to voice their concerns.

Apart from its investment in Eurasian Minerals, the Bank’s future role in the Haitian mining sector remains unclear. The Bank is still working to finalise its next country strategy for Haiti, which may reveal whether it will continue to add legitimacy to a flawed mining agenda. Will the Bank renounce responsibility despite its role in drafting a dangerous law? Or, will it use its influence to fix the problem – to assist the Haitian government to develop the mining sector responsibly and inclusively or not at all?