IMF blames the victims as markets thow another taper tantrum 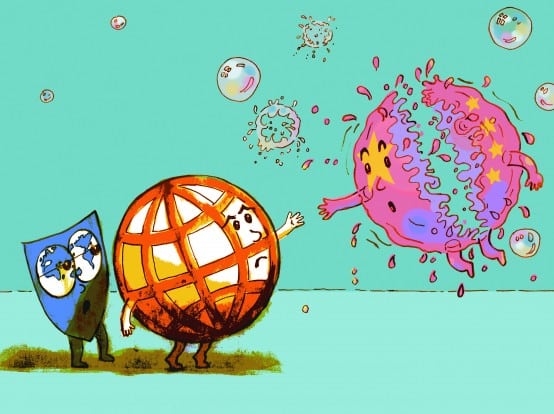 Global economic instability has highlighted the vulnerability of developing countries to renewed economic turbulence and even the potential for new debt crises in developing countries, in particular Sub-Saharan Africa. During the summer of 2015 China’s stock market began to falter; in January these problems recurred. Adding to the challenges for developing economies, the United States began to raise its interest rates in December, signaling the end of its period of so-called ‘extraordinary accommodative monetary policy’, including quantitative easing (see Bulletin Feb 2014), increasing pressures on developing countries by triggering capital flows out of emerging markets at record rates. According to economist Martin Wolf writing in The Financial Times in January, “another set of credit bubbles … in emerging economies is loudly popping”.

Gloomy forecasts, but no change to Fund’s policy advice despite fears of “domino effect” in developing countries

The IMF and World Bank issued January economic analyses which significantly downgraded their previous expectations. The World Bank’s Global Economic Prospects report emphasised the risk of a “synchronized” slowdown in the biggest emerging markets. It found growth in developing countries reached a post-crisis low of 4.2 per cent in 2015, and that in Sub-Saharan Africa it slowed to 3.4 per cent in 2015. Over $52 billion was removed from developing countries’ financial markets in the third quarter of 2015, the largest quarterly outflow on record. The IMF released its update to the World Economic Outlook (WEO), downgrading its own previous forecasts for economic growth. IMF managing director Christine Lagarde told German business daily Handelsblatt in December that growth prospects were “disappointing and uneven”. Lagarde cautioned that an interest rate rise in the US would also lead to higher debt costs for many developing countries, but Lagarde warned against any debt defaults because they would risk “infecting” banking systems and governments.

The WEO update identified the risk of its forecast being wrong as “to the downside”, e.g. that the Fund may still have been over-optimistic, due to the possibility of a “generalized slowdown in emerging market economies, China’s rebalancing” and US’ rising interest rates. The Fund added that global growth could be “derailed” if these risks are not “successfully managed”. The update reiterated that “policy priorities” for emerging and developing economies are varied but cautioned that policymakers “need to manage vulnerabilities and rebuild resilience”, often seen as a coded way of indicating further fiscal caution. The IMF advocated that “policymakers in emerging market and developing economies need to press on with structural reforms [and] facilitate an …. innovation-friendly business environment”. It also encouraged further “deepening local capital markets”. ­­ The Fund concluded that for “a number of commodity exporters, reducing public expenditures” is necessary, also advocating for “exchange rate flexibility” to cushion the impact of further shocks.

However, an October policy brief by the International Labour Organisation (ILO) contradicted the Fund’s policy advice. It had warned that the “new adjustment shock” to come in 2016 was not simply driven by inevitable global economic dynamics, but by policy choices to cut budgets and spending “excessively”. They warned that such policies in this climate would mean that developing countries would be “most severely affected”, with sub-Saharan Africa and the Middle East and North Africa regions to be “hardest hit”. This vulnerability would come from premature reductions in subsidies on “fuel, electricity, food and agriculture” that were going to predominantly would impact the poorest and most vulnerable. The ILO argued that protection via targeted schemes and social protection “takes time to be fully functional”. Moreover, trying to offset the impact on the most vulnerable by targeting assistance to the very poorest “risks excluding large segments of the vulnerable and low income households” while it will “only increase the vulnerability of middle classes”. Instead, in times of crisis, policy should prioritise “scaling up … and building social protection floors for all”.

“Increasing debt vulnerability” in developing countries, following “boom in lending to most impoverished”

A December IMF policy paper, Public Debt Vulnerabilities in low-income countries: the evolving landscape” acknowledged that developing countries “faced increasing debt vulnerability in the last 2 years”. The report examined the evolving public debt of 74 LICs, arguing that changes were due to “debt relief, strong growth and high demand for commodities”. Despite the changing circumstances and the concerns set out by the ILO over excessively cautious policies, two of the paper’s authors advocated in a January blog for “fiscal prudence [and] improved debt management.” They argued that to address “challenging debt conditions”, countries should still focus upon the “need to strengthen their fiscal frameworks … and reduce their debt”.

The UK’s Guardian newspaper reported in September that the IMF’s September Global Financial Stability Report (GFSR) had also identified the risk of “a new credit crunch”, due to growth fuelled by a “10-year corporate borrowing binge”. The IMF report found risks of banking sector distress and increasing corporate bankruptcy, in particular when US interest rates would rise, as subsequently occurred in December. The Fund itself warned: “shocks to the corporate sector could quickly spill over to the financial sector and generate a vicious cycle as banks curtail lending”.

The January economic turbulence in China occurred as the world’s economic and political leaders gathered in Switzerland for the World Economic Forum (WEF). The Trade Union Advisory Committee to the OECD (TUAC) published a briefing to coincide with the January World Economic Forum questioning whether the gathered global policymakers appreciated the risk of global stagnation, despite their own studies’ findings. The briefing warned of a potential “domino effect” in developing countries in 2016, starting with China then affecting other leading emerging markets. It pointed out that China’s corporate debt increased “from around 100% to 150% of GDP” since 2008.

UK NGO Jubilee Debt Campaign (JDC) had warned in a July report that global debt levels were rising and that 22 LICs were “already in debt crisis” and a further 71 were at risk (see Observer Autumn 2015) due to “boom in lending to the most impoverished countries”, in particular to low-income countries (LICs) where lending which tripled from 2008 to 2013. As the Chinese economy slows, the period of high commodity prices has ended, driving growing debt risks of many commodity exporting countries, such as Ghana who turned to the IMF for a loan in late 2015. Crude oil has fallen from a price of $100 per barrel in September 2014 to below $30 in January. JDC also highlighted the important role played by new forms of investment, in particular Public-Private Partnerships (PPPs), in adding to debt risks by masking the amount of debt government may have to eventually repay and concealing the actual degree of vulnerability to new debt crisis. A follow-up blog by JDC in December pointed out that developing countries’ increased borrowing was primarily from new loans, of which 60 per cent had come from multilateral institutions (half of which was from the World Bank alone).

Financial newspaper the Wall Street Journal highlighted the risks to African commodity exporting countries in a January report. It pointed out that South Africa’s rand had lost 26 per cent of its value against the US dollar in six months from June 2015, and reached a new record low in January. Though Nigeria had “ratcheted up efforts” to sustain a currency peg, Lagarde – visiting the country at the time – advised against, saying “exchange rate flexibility … can help soften the impact of external shocks”. However, the article revealed that “accelerating currency declines across Africa are starting to feed through to the real economy”, citing the fact that “mining companies in Zambia have laid off thousands of workers”.

The Guardian reported in January that Africa’s oil-producing and metal-rich giants now find themselves facing a dangerous mix of lower export revenues, depreciating currencies, declining financial flows from China, falling domestic demand and higher debt costs following December’s US interest rate rise. Kenya-based commodity trader, Aly Khan Satchu, told the Guardian that “in Zambia, the currency has pretty much collapsed” adding that many commodity producing states in Africa “have tipped over the edge because they are going to find it very expensive to borrow international money”.

IMF blames the victims as markets thow another taper tantrum