The World Bank, the IFC and the antecedents of the financial crisis 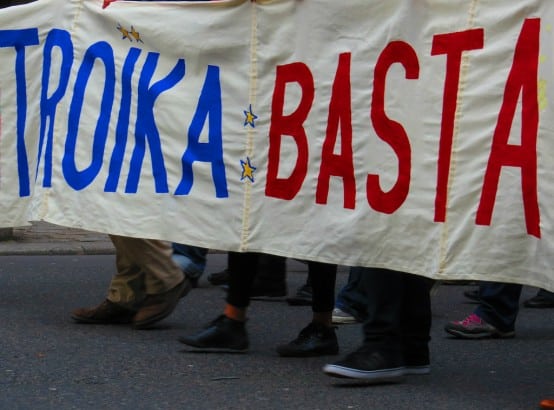 In January, the IMF confirmed it has been in negotiations for a third loan since 2010 to the Greek government; the details of the Fund’s mission are yet to be confirmed. A third loan programme from the European Central Bank and European Commission was arranged in February 2015 and extended in August (see Observer Autumn 2015), however, the IMF was not part of this agreement.

The conditions of the IMF loan as outlined in July by newspaper International Business Times, includes a deepening of Greece’s privatisation programme, higher taxes on farmers and changes to the pension system, such as increasing the retirement age and employee contributions. Greece has a debt of €320 billion ($350 billion) and a debt to GDP ratio approaching 180 per cent. The Fund claimed Greece’s current pension system is “unaffordable” and is currently reviewing draft proposals for reform.

Gerry Rice, the Fund’s director of communications, said in January that the IMF was “ready to support Greece not only with advice, not only with technical assistance but also with financing.” Referring to a “both legs” approach, the Fund proposed debt relief and pension reform as necessary to “ensure stability”. In a January statement made at the World Economic Forum in Davos, Switzerland, IMF managing director Christine Lagarde said that “such a programme would require strong economic policies, not least pension reforms as well as significant debt relief from Greece’s European partners to ensure that debt is on a sustainable downward trajectory.”

for us it’s a red line not to reduce pensions for a 12th consecutive timeGiorgos Katrougalos, Greek labour minister

Greeks loathe returning to the Fund

Speaking to the Wall Street Journal in January, Greek labour minister Giorgos Katrougalos said “for us it’s a red line not to reduce pensions for a 12th consecutive time”. Greek pensions have been cut by 40 per cent since the 2010 loan package. He added “the best way to fill the gap is not by reducing but by increasing the economy. We must not burden the economy further with recession-bringing measures”.

Labour unrest from both the public and private sector is troubling a government with a parliamentary majority of just three seats. Unions have announced a general strike in February, following demonstrations and blockades in January with 10,000 mostly self-employed professionals and farmers who are at risk of losing more than three quarters of their annual earnings.

After a meeting with Lagarde in Davos, Greek prime minister Alexis Tsipras said, “we must all understand that, next to balanced budgets, we must also have growth … We need to be more realistic, and show more solidarity too.”

The IFC gets involved

In May 2015 the International Finance Corporation (IFC, the World Bank’s private sector arm) agreed to the Greek government’s request for reengagement with its financial sector, following from a request made in late 2014 but delayed due to uncertainty over Greece’s status in the eurozone.

In November, the IFC announced it was to invest in Greece. In December, €150 million ($164 million) worth of shares were acquired in Greece’s four main banks, which, according to a European Central Bank stress test in October, face a €14.4 billion ($15.7 billion) shortfall. According to the IFC, Greece’s infrastructure, energy, logistics and credit sectors are the targets of their private sector investment opportunities. Dimitris Tsitsiragos, IFC vice president, said “the main goal is to re-establish confidence and trust about investing in Greece”, reported news agency Reuters in November.

The IFC invests primarily in developing countries, making this temporary engagement unusual, but not unique. It follows for example, investments in South Korea during the 1999 Asian financial crisis (see Update 63). Questions remain over the IFC’s ability to understand and measure the developmental impact of their investments (see Observer Winter 2014).

The World Bank, the IFC and the antecedents of the financial crisis