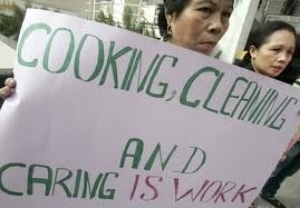 This briefing looks at the IMF October 2015 staff discussion note Catalyst for change: Empowering women and tackling income inequality and discusses the relationship between income and gender inequality. It also proposes ways in which the IMF can take forward its work in this area. Gender inequality and its impact on economic growth have risen up the IMF agenda under current managing director Christine Lagarde’s leadership. In October 2015, the IMF published the staff discussion note (SDN) Catalyst for change: Empowering women and tackling income inequality, following a series of earlier gender-focused SDNs. The series has focused on the ways in which gender inequality has a negative impact on female labour force participation rates, which in turn has a negative effect on macroeconomic growth and stability. Previous SDNs have focused on gender inequalities in unpaid care; education: access to productive inputs: tax incentives and legal restrictions to women’s work.1 The latter links gender inequality to another issue on which the IMF has published research – income inequality.

In recent years, extreme economic inequality has become a growing concern to a wide range of actors who have highlighted its negative effects on growth, poverty reduction, and social cohesion. The concentration of wealth is rising.  In 2010 the combined wealth of the world’s poorest half was equal to the wealth of the 388 richest individuals; in 2016 it was equal to the wealth of only 62 individuals.2 The gender dimensions of this inequality are undeniable – just nine of these 62 are women, whilst women make up the majority of those on low wages and in the most precarious forms of work. The IMF has voiced concerns, calling “widening income inequality… the defining challenge of our time”3 and Lagarde stated in June 2015 that addressing it is “not just morally and politically correct, but … good economics”.4

The rights of women are systematically worse in situations of greater economic inequality.Francesca Rhodes, Oxfam GB

The phrasing of this last statement will sound familiar to those who follow the work on gender by International Financial Institutions (IFIs). The ‘gender equality is smart economics’ approach is well trodden by the World Bank Group, which argues that removing the barriers that women and girls face in participating in the economy would have positive effects on economic growth and poverty reduction. The IMF accepts that at least this aspect of women’s economic inequality can be ‘macro-critical’, e.g. impacting upon the macro-economy and therefore an area of policy with which the IMF should engage.

The IFI’s focus on gender equality is welcome, and they have made a strong economic case for achieving it. However, on its own, increasing women’s participation in the economy does not necessarily support gender equality or women’s human rights, as women are often concentrated in low pay, informal and precarious work. Alongside increased economic participation, there also need to be efforts to create decent jobs; social protection measures; challenge occupational segregation; and address heavy and disproportionate unpaid care responsibilities. This is particularly important for the poorest women and girls. In this context, it is useful to acknowledge that the economic model promoted in the past by these institutions has often relied upon women’s low paid and unpaid labour. Economic empowerment also needs to be accompanied by greater equality in other areas of women’s lives, which require, for example, addressing violence against women and girls and supporting women’s leadership.5

The October SDN used data from the UN’s Gender Inequality Index (GII) to analyse almost 140 countries over two decades, and shows that gender inequality is strongly associated with income inequality. An increase in the GII from 0 (perfect gender equality) to 1 (perfect inequality) is associated with an increase in the Gini coefficient, by which a country’s income distribution is measured, of almost 10 points. This trend is found to be driven by gender inequality in both economic outcomes and opportunities.

The SDN found that in developed countries gender pay gaps and women participating in the economy at lower rates than men are the main factors in the link between gender and income inequality. However, the picture is different for developing countries where women and girls experience barriers in accessing health and education, and can be excluded from financial services. This affects their economic opportunities and is a cause of income inequality.

As stated in the SDN, the interaction between gender and income inequality has not been extensively researched. The note is therefore a welcome addition to the debate, adding analysis of the gender inequalities that lie behind the headlines on extreme economic inequality. The SDN advocates a range of interventions aimed at removing barriers to women’s participation in the economy, including revising tax policies to remove gender biases; removing legal restrictions; and improving women’s financial access.

The SDN also recommends creating fiscal space for expenditure on education; health and infrastructure; improving parental leave and childcare; and implementing gender responsive budgeting. These are welcome recommendations that if implemented progressively would benefit the poorest women and girls. In order for this to become reality however, governments need to be able to raise the domestic resources needed to invest in these areas. This will require a reformation of the current global tax system, in which the richest individuals and companies are able to avoid paying much of the tax they owe and a consideration of the extent to which austerity policies work against the recommendations of the SDN.6

Though IMF research has no direct bearing on IMF policy, the IMF is piloting gender analysis and growth-focused analysis in one aspect of its surveillance work, the annual Article IV report which the IMF conducts to assess a member country’s macroeconomic status. Starting with one or two countries per region, the IMF has assessed how countries’ macroeconomic outlook is affected by gender gaps, doing so in at least nine Article IV reviews published in 2015.

Whilst most of the Article IV reviews so far have contained quite brief references to gender gaps, a more detailed analysis emerged in Chile’s 2015 Article IV review. Released in August 2015, it highlighted that gender gaps in Chile could amount to a cost of 17 per cent of GDP. To close these gaps, the report recommended a range of measures including expanding the provision of and access to early-childhood education and childcare; extension of maternity leave and increasing options to share leave with fathers; investment in transport infrastructure; and training for youth and women to reduce occupational segregation.

These are welcome policy recommendations, and the same methodology and analysis of gender gaps that has been carried out for Chile could and should be replicated for other countries in the future.

However, the ‘smart economics’ approach applied to these reviews does have limitations. It risks implying that women’s economic equality can be realised through reforms focused purely on increasing women’s economic participation. Gender inequalities impact across women’s lives, with the barriers and injustices women experience in different forms being interlinked and inseparable. The IMF is understandably focused upon impacts on women’s participation in the economy as part of its legitimate ‘macro-critical’ mandate, but it is impossible to separate the economy from its’ social and political context. The types of gender inequalities that are considered ‘macro-critical’ should be expanded in the future.

Violence, for example, affects women and girls not only in their physical and psychological wellbeing, but also in their livelihoods and economic participation.7 In some cases, women’s economic empowerment can reduce their risk of experiencing violence, but research shows this is a mixed picture across different contexts.  Violence can prevent women from earning an income, and for some women, violence is used in the household to prevent them from having control over their income. Women also often experience violence in the workplace or on the way to and from work. Increasing women’s involvement in the labour market therefore needs to be accompanied with efforts to reduce these risks. Violence against girls affects their access to education – whether this is child marriage forcing a girl to leave school early, or girls experiencing violence whilst at or on the way to school. The World Bank has previously highlighted the high cost of domestic violence to GDP, noting the economic as well as human costs.8

Social norms which undervalue women’s work – whether paid or unpaid – have profound effects on macroeconomic outcomes.9 The norms can be reflected in the attitudes and beliefs of employers or workers themselves who accept lower wages for women, or in the value and investment that society as a whole places into roles which are traditionally thought of as ‘women’s work’, such as care work or certain manufacturing industries. Without addressing the way these norms shape priorities in economic and labour market policy, equal and quality jobs will not be created for women and men. Sexual and reproductive health and rights are also crucial to enable women to make choices about whether, how many and when they have children, and to balance these choices with their economic participation.10

Therefore, ‘macro-critical’ policy – women’s health, education and labour market participation rates – are already considered important areas due to their impact on women’s incomes and income inequality. These policy areas are also integrally linked to and depend upon factors, such as the prevalence of violence against women and girls; social norms, women’s power in decision making; and sexual and reproductive health and rights, which need to be given equal attention by financial institutions, including in research and surveillance work.

The framing of the SDN emphasises the importance of understanding the impact of gender inequality through a broader lens of income inequality. It shouldn’t come as a big surprise that half the population of every country consistently earning less than the other half leads to higher income inequality. When women are paid less for doing the same jobs as men, are working fewer hours than men, or women’s working possibilities are concentrated into low paid sectors, overall income inequality levels tend to increase. Women are not the only group in society who face discrimination resulting in lower earning potential, for example migrants and ethnic minorities can face similar structural inequalities. The importance of addressing social inequalities should be clear for anyone concerned about income inequality as an economic ill.

Extreme economic inequality is caused by an economic system heavily skewed in favour of those at the top. The IMF could build upon its recent research by taking a broader view on the relationship between income inequality and gender. Trickle-down economics has failed, and wealth is increasingly concentrated in the hands of the (mostly male) few, with the poorest women and girls most affected by low wages and a lack of adequate public services. The rights of women are systematically worse in situations of greater economic inequality. Structural adjustment and austerity measures designed to reduce government spending, coupled with the deregulation of labour, finance and trade markets, have created an economic model which relies on women’s low-paid and unpaid work, under which economic inequality is rapidly rising.

Women’s economic equality will only be achieved within a broader transformation in the way economic resources are governed. The IMF’s research and tentative steps to include gender analysis in surveillance are steps in the right direction. Now the IMF must translate this promising progress into concrete changes in its lending policy, surveillance and technical advice.