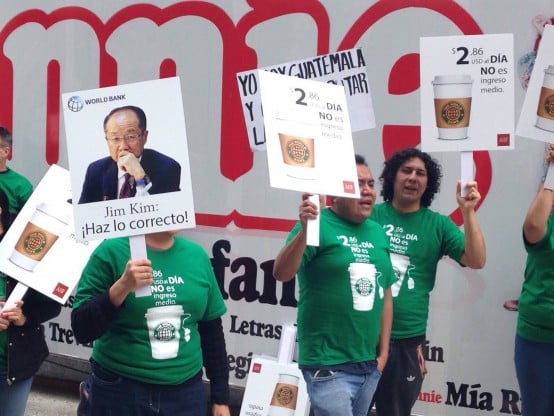 As the third and final consultation phase on the second draft of the World Bank’s proposed new environmental and social framework (ESF), replacing the current safeguards, progresses, civil society organisations (CSOs), the UN and certain member states continue to demand that the Bank incorporates human rights in all its activities (see Observer Autumn 2015, Winter 2015).

In an August report to the UN General Assembly, UN special rapporteur on extreme poverty and human rights Philip Alston characterised the World Bank as a “human rights-free zone” and denounced the institution’s current approach to human rights as “incoherent, counterproductive and unsustainable”. He highlighted that despite the Bank mentioning human rights in its research, it “doesn’t actually do anything about it in its programmes and projects, where it really matters.”

In the report Alston called on the Bank to take a new approach to human rights in its legal policy, public relations, policy analysis, operations, and safeguards. He cited the need for mechanisms that support governments to incorporate human rights into development, and a due diligence policy to enable the Bank to adjust or reject projects that would otherwise lead to, or support, human rights violations. Alston told the Inter Press Service (IPS) news agency that this is important as what the Bank “does on safeguards, and what it doesn’t do on human rights, makes a huge difference in terms of setting global standards”. In October UK newspaper The Guardian reported that  the “World Bank has rejected Alston’s claims”, stating that Alston’s “report had fundamentally misrepresented its position on human rights”.

Concerns about absence of human rights from draft safeguards

A December joint statement by five African civil society groups, including the African Law Foundation (AFRILAW), called for revisions to the draft ESF: “Our paramount concern is that the new framework fails to require respect for human rights or robust due diligence to ensure protection of human rights within World Bank-financed activities. We fear that, if adopted as is, the draft ESF will significantly increase development-related human rights violations.” Saviour Akpan, of Community Policing Partners for Justice (COMPPART) stated: “Human rights [protection] is the umbilical cord of any development and no safeguards survives without [it]”. Bimbo Oshobe, of the Nigerian Slum/Informal Settlement Federation, added: “The World Bank must uphold human rights. It cannot hand over its responsibilities to governments like ours that violate human rights every day… We need the World Bank to really ensure that our rights are protected and make sure its projects really benefit the poor.” Okereke Chinwike, of AFRILAW concluded: “the World Bank has a duty to the citizens to protect their human rights and take appropriate steps to ensure remedy when abuses occurred.”

Also in December, in a joint statement to three World Bank executive directors (EDs) representing Latin America, more than 180 Latin American and Caribbean CSOs expressed their concerns about the framework and its consultation process, including that the draft ESF “avoids references to international standards on human rights … lacks a human rights approach … lowers the standard for the whole development community” and goes against the “World Banks goals to eradicate extreme poverty and promote shared prosperity”.

In addition to public statements by some World Bank executive directors (EDs) representing borrower countries (see Observer  Autumn 2015), EDs from six European donor countries also expressed concern. In June, as the Bank board’s Committee on Development Effectiveness (CODE) was discussing the release of second draft ESF for consultation, the EDs of the UK, Italy, Germany, France, the Netherlands and the Nordic and Baltic states wrote a confidential statement to CODE on the second draft leaked to the press in November, stating “it is very much the responsibility of the Bank to ensure that its operations do not violate human rights”.

Civil society participation in the ESF consultation process has continued to be fraught with difficulty, due to barriers such as limiting attendance to those pre-registered and limited preparation time due to short notice periods (see Observer Summer 2015, Autumn 2014). In Mexican online newspaper Sin Embargo,  Mexican NGO Fundar called the December Mexico consultation “a failure” that “did not meet the minimum requirements needed to ensure an effective process of participation and consultation”. According to Fundar only 13 representatives from Mexican civil society attended, of which most were only present because they approached the Bank to enquire about participation. “Who would have been consulted if no one had sent an email to request attendance?” wrote Mariana González Armijo, of Fundar.

Concerns have also continued over how civil society input will be incorporated. In an August joint press statement 18 CSOs, including Earthlife Africa and the Bank Information Center (BIC), stated “that the new draft contradicts World Bank president Jim Yong Kim’s promise to ensure that the Bank’s new rules will not weaken or ‘dilute’ existing mandatory environmental and social protection measures and calls into question the extent to which the Bank has responded to public input”.  Jessica Evans, from NGO Human Rights Watch, said “the draft treats human rights as merely aspirational, rather than binding international law… The bank’s refusal to require respect for human rights, despite pleas to do so from communities around the world, sends a message to its own staff that respect for rights is discretionary.” The third phase of consultations will close on 15 March 2016.

US legislation continue to demand human rights in safeguards

In December 2015 the US Congress passed its  2016 Omnibus Appropriations Act, authorising the expenditure of public funds for a specified purpose (see Observer Winter 2015). According to US-based NGO  ‘Ulu Foundation, the 2016 Act has retained instructions to “the US Treasury department to oppose any World Bank policy that provides less protection than the Bank’s current safeguard requirements”. In line with the 2015 Act, the 2016 Act requires the US, the Bank’s largest shareholder, “to vote against any loan, grant, policy or strategy if [the Bank] has adopted and is implementing any social or environmental safeguard … that provides less protection than World Bank safeguards in effect on September 30, 2015”. Furthermore, the 2016 Act also reiterates  that the US executive director of each international financial institution (IFI) must “seek to require that such institution conducts rigorous human rights due diligence and risk management, as appropriate, in connection with any loan, grant, policy, or strategy of such institution”. Last year, for the first time, this language appeared in the 2015 Appropriations Act and there were significant concerns by civil society that it would be removed as Congressional leadership shifted hands.