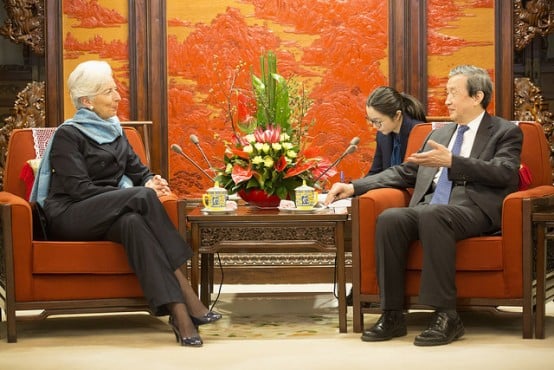 This Inside the Institutions examines the recent and ongoing reforms at the IMF and World Bank, and places them in context of existing structures and processes.

***this piece is now outdated and kept on our website only for reference. For more updated information on IMF and World Bank decision making and governance, please click here.***

With its most recent quota review finally ratified following a five-year delay, the IMF is applying small changes to its decision-making structure. Simultaneously, the World Bank is undergoing a “voice reform” to increase developing countries representation in their governance structures.

The voting power within the IMF is determined by a quota formula. The current formula emphasises economic size and openness and consists of four elements: GDP (50 per cent), openness (30 per cent), economic variability (15 per cent) and international reserves (5 per cent). Quotas are denominated in Special Drawing Rights (SDR), the IMF’s internal reserve asset, consisting of the dollar, the euro, the Japanese yen, the pound and recently the Chinese renminbi (yuan), (see Observer Winter 2016). The IMF is required by its Articles of Agreement to review its quotas every five years so that the distribution of votes is linked to the economic weight of the member states. The reviews address two main issues: “the size of an overall increase [in quotas] and the distribution of the increase among members”. They are meant to “assess the adequacy of quotas in terms of members’ balance of payments financing needs and in terms of its own ability to help meet those needs”. Reviews also enable increases in quotas to reflect changes in members’ position in the world economy.

The Fifteenth General Review of Quotas was expected to take place in 2015, but was delayed by the US Congress’ failure to approve the 2010 agreement until December 2015 (see Observer Winter 2016). The 2010 reforms, which were made within the context of the fourteenth review, included a shift of 6.2 per cent of quota shares towards emerging and developing countries while also doubling the contributions to the Fund from 238.5 billion SDR (about $329.83 billion) to 477 billion SDR (about $659.67 billion). Given the delay to the ratification, the work on the fifteenth review is only starting now, though a timeline has not been yet been announced.

Decision-making in the IMF

The board of governors is the IMF’s highest decision-making body and consists of one governor and one alternate governor from each country, normally the minister of finance or head of the central bank. Although the board of governors has delegated much of its decision-making power to the executive directors, it retains significant authority including the approval of quota reforms and amendments to the Articles of Agreement. The board of governors also elects the executive directors (EDs).  The executive board, which is responsible for daily operations, is chaired by the managing director and consists of 24 executive directors representing member countries through constituencies, though the five largest shareholders always enjoyed the privilege of directly appointing their own ED. ED constituencies are divided according to quotas with some member countries representing only themselves (this is the case for the US, Japan, China, Germany, Russia, France, Saudi-Arabia and the UK), while other EDs represent a block of countries, or constituency. Sub-Saharan Africa, for example, has two EDs representing 46 countries. Following the 2010 reforms and taking effect in October 2016, all 24 EDs will be elected. Decision-making on the executive board is typically made through consensus with voting kept to a minimum. Votes on substantive issues need 85 per cent approval, granting the US (with its 16.46 per cent quota) effective veto power over any major decisions.

The World Bank has a similar structure to the IMF with a board of governors overseeing a board of directors made up of the Bank’s president and 25 EDs. Similarly to the IMF, votes are distributed by shares, and the five largest shareholders (US, Japan, Germany, France and China) have their own ED. The president has no voting power on the board, except for a deciding vote when voting is tied. Seven of the 25 ED constituencies are made up of one member (US, Japan, Germany, China, France, UK and Saudi Arabia), whereas Sub-Saharan Africa is divided into three constituencies.

In 2008 the Bank began a “voice reform” process to increase developing countries’ representation, recognising that “the distribution of shareholding is important for the legitimacy of the institution”. Initial reforms in 2010 increased developing countries shares to 47.19 per cent from 44.06 per cent in 2009, with periodic shareholding reviews instituted every five years based on agreed principles and a dynamic formula for calculating voting shares. The September 2015 shareholding review acknowledged the growing share of developing and transition countries in the world economy, which reached 49.19 per cent of global GDP, when measured by a blend of market rates and purchasing power parity, between 2012 and 2014. In line with this the Bank expects the voting share of developing countries to increase to 52.76 per cent when all the capital subscriptions come in.

The review considered the economic weight of members, their contributions to the Bank’s development mission and assessed “progress towards equitable voting power”. Among the proposed measures to increase representation and board effectiveness are; reducing the size of underlying committees and realigning them with the board of directors; building capacities of EDs; and potential elections for all ED seats, the latter of which would require changes to the Bank’s Articles of Agreement. In the review the Bank outlined a road map of reports and creation of the dynamic formula “which primarily reflects countries’ evolving economic weight and the World Bank’s development mission.”  The Bank aims to conclude the implementation of the current review at the annual meetings in 2018.

Civil society has historically demanded three elements of governance reform of the IMF and World Bank. The first is reform of decision-making through the introduction of double majority voting, where agreement requires both shareholder and member state majorities, thus giving developing countries a larger part in decision-making. Second, civil society demands greater representation of developing countries on the executive board, arguing that European countries are overrepresented. Finally, civil society argues that leadership of the Bank and IMF must be based on merit rather than on the existing ‘gentlemen’s agreement’ where their leadership is shared between European and US-selected leaders. The executive board’s reappointment of managing director Christine Lagarde for a second term without a single challenger in February is seen as symbolic of the lack of democracy and transparency in the leadership selection process.