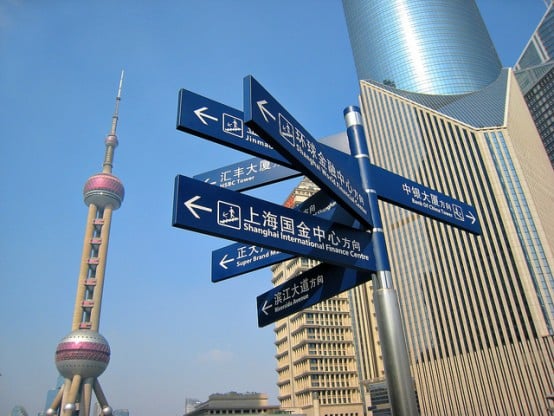 This briefing examines the trajectory of China's evolving leadership in international development finance. It looks like the impact of China's massive increase in development finance for developing countries, arguing that it provides a useful alternative to Western-dominated institutions. It notes that it is too soon to tell if Chinese finance will support socially and environmentally sustainable projects and that concerns remain about transparency, accountability, and the environmental and social safeguards used by Chinese institutions. 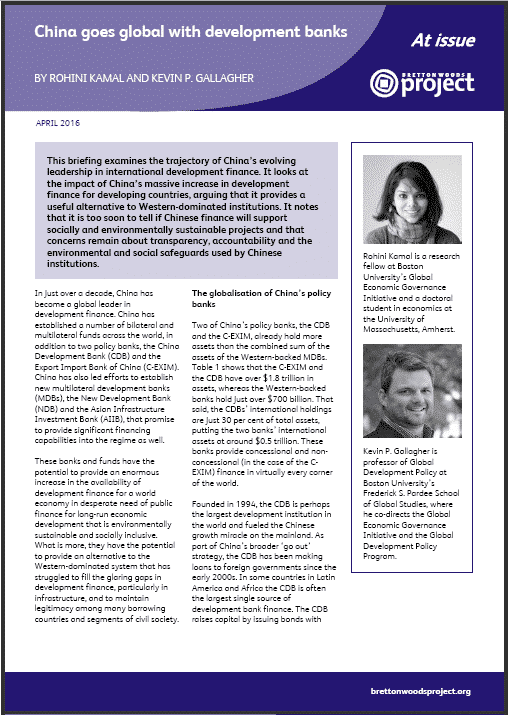 The record thus far of the CDB and C-EXIM has raised questions whether Chinese banks are properly incorporating social and environmental risk into these activities, and the extent to which the project cycle is governed in a transparent and accountable manner.

These banks and funds have the potential to provide an enormous increase in the availability of development finance for a world economy in desperate need of public finance for long-run economic development that is environmentally sustainable and socially inclusive. What is more, they have the potential to provide an alternative to the Western-dominated system that has struggled to fill the glaring gaps in development finance, particularly in infrastructure, and to maintain legitimacy among many borrowing countries and segments of civil society.

Two of China’s policy banks, the CDB and the C-EXIM, already hold more assets than the combined sum of the assets of the Western-backed multilateral development banks. Table 1 shows that the C-EXIM and the CDB have over $1.8 trillion in assets, whereas the Western-backed banks hold just over $700 billion. That said, the CDB’s international holdings are just 30 per cent of total assets, putting the two banks’ international assets at around $0.5 trillion. These banks provide concessional and non-concessional (in the case of the C-EXIM) finance in virtually every corner of the world.

Founded in 1994 and fueled by the Chinese growth miracle on the mainland, the CDB is perhaps the largest development institution in the world with $95 billion in base capital and over $1 trillion in assets, compared to less than $600 billion in assets of the entire World Bank Group. As part of China’s broader ‘go out’ strategy, the CDB has been making loans to foreign governments since the early 2000s. In some countries in Latin America and Africa the CDB is often the largest single source of development bank finance. The CDB does not raise its capital through private deposits, but by issuing bonds with terms of up to 30 years to institutional investors on China’s interbank bond market and foreign markets in both renminbi and other currencies. It is the second-largest bond issuer in China after the ministry of finance and its bonds enjoy a credit rating equivalent to government bonds. The Chinese state has full ownership of the Bank and implicitly guarantees its debt, enabling the CDB to provide lower interest rates and longer-term loans than other Chinese banks. The CDB is also China’s largest foreign currency lender, drawing directly on China’s vast foreign currency reserves.

In addition to the CDB, the C-EXIM plays an important role in supporting the state’s foreign trade and economic development in the global arena. C-EXIM provides financing for trade in high-technology products and equipment; offshore construction contracts, overseas investment projects; and provides international guarantees. Furthermore, C-EXIM is mandated to promote China’s long-term access to strategically important natural resources through conventional Export Credit Agency (ECA) methods, including export credits – a form of subsidy in which an ECA assumes the risk of a foreign borrower’s default, and unconventional ones, such as direct lending and credit guarantees.

China has also pioneered a host of bilateral and regional development funds. These funds combine to add upwards of $100 billion in development finance provided by the Chinese in recent years. Table 2 exhibits the major funds that we were able to confirm.

A major portion of the investments is in Asia, with the largest being the $40 billion Silk Road Fund established in 2014 with investment from state institutions including the C-EXIM and CDB. The fund is open to investors from other countries as well and has provisions to expand maritime connectivity between China and the rest of Asia (Central, South and Southeast Asia, and the Middle East), North and Northeast Africa, and Europe. A related fund is the Green Ecological Silk Road Investment Fund, a private equity fund for improving the ecological environment in the region.

In the larger Eurasian region, investments include the China-Central and Eastern European (China-CEE) Fund— set up to facilitate financing of projects to enhance inter-connectivity in the region, specifically in Eastern Europe— and the bilateral Russia-China Investment Fund (RCIF) established by two government-backed investment vehicles, the Russian Direct Investment Fund and China Investment Corporation (CIC). The RCIF will invest 70 per cent of its capital in Russia and other Commonwealth of Independent States (CIS)  countries (currently Azerbaijan, Armenia, Belarus, Kazakhstan, Kyrgyzstan, Moldova, Tajikistan, Turkmenistan, Uzbekistan and Ukraine) and 30 per cent in China.

Chinese finance also plays a prominent role in Latin America and the Caribbean. The largest instrument to do so is the $20 billion CELAC (Community of Latin American and Caribbean States) -China Investment Fund for infrastructure projects, followed by the $10 billion dollar China-LAC Industrial Cooperation Fund for medium- and long-term financing for industrial investments. The China-LAC (Latin America and the Caribbean) Cooperation Fund finances projects in areas including education, water conservation, and energy. The Fund includes a private equity fund administered by the C-EXIM. In addition to these, the China-Mexico Investment Fund was set up to support Chinese and Mexican companies investing in infrastructure, mining and energy projects in both countries.

Over the last decade China has created a massive platform of public and private investments in Africa. To date the largest of such initiatives is the China-Africa Industrial Capacity Cooperation Fund Company Limited (CAICCF), jointly established earlier this year by the China Foreign Exchange Reserves and C-EXIM. The fund supports infrastructure development, particularly in the transit sector, as well as provides financing for manufacturing and agriculture projects. Among the state-backed funds is the China-Africa Development Fund (CAD Fund), a Chinese private equity fund financed by the CDB, set up in order to stimulate investment in Africa by Chinese companies in power generation, transportation infrastructure, natural resources, and manufacturing. The Africa Growing Together Fund (AGTF), co-financed by the African Development Bank (AfDB) and the People’s Bank of China, is to finance eligible sovereign and non-sovereign guaranteed development projects in Africa. 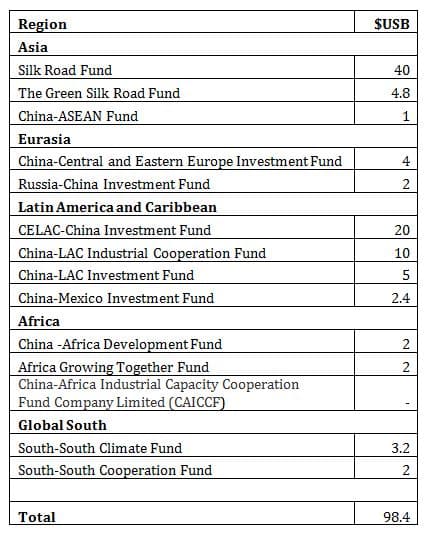 With much fanfare, China helped spawn two global development banks, the NDB and the AIIB. The NDB was launched in July 2015 by Brazil, Russia, India, China and South Africa – collectively known as the BRICS countries. The NDB will provide financing to developing countries to help finance development projects, at least initially in infrastructure and with a focus on renewable energy. Each BRICS member is expected to put an equal share into establishing the startup capital of $50 billion with a goal of reaching $100 billion. Under the current set-up membership may not just be limited to BRICS nations. Future members could include countries in other emerging markets blocs. Each member country will send either their finance minister or central bank chair to the NDB’s representative board. The bank is set up in a way so that no country will have veto power over voting decisions, in pointed contrast to the veto power the US enjoys over World Bank (and IMF) decision-making.

The AIIB was created to support infrastructure construction in the Asia-Pacific region. It was proposed by China in 2013 and formally started operations in December 2015, after the Articles of Agreement (AoA) entered into force with ratification from 17 member states holding 50.1 per cent of the shares. This is in accordance with the AoA, which requires ratification from 10 member states holding a total number of 50 per cent of the initial subscriptions of the authorised capital stock. By end of February this year, all 57 of AIIB’s Prospective Founding Members (PFMs) had ratified the AoA. The Memorandum of Understanding (MoU) specifies that the authorised capital of AIIB is $100 billion and the initial subscribed capital is expected to be around $50 billion. AIIB’s investment capacity could reach $250 billion by the end of 2020 in accordance with provisions made in its AoA. The AIIB is likely to co-finance projects with the World Bank and Asian Development Bank (ADB), particularly in the first years of its operations.

The PFMs include most developed nations, with notable exceptions being US, Canada, and Japan. China currently holds the largest share of voting rights of the AIIB, just above the one-quarter threshold needed to block any decisions requiring a super majority vote (a super majority is defined by the articles to be three-fourths of the voting power and two-thirds of the members). This gives China the power to potentially block decisions involving structure, membership, capital increases, and other significant issues laid out in the articles that require a super majority of votes, but not decisions related to day-to-day operations.

In terms of operational details, the AIIB is expected to be overseen by an unpaid, nonresident board of directors. This set-up aims to accelerate the speed of loans approval process. The AIIB will open bidding for projects to all, unlike the ADB, which restricts contracts to member countries. The procurement policy will be “more streamlined” in terms of its operational details relative to the other development banks. The Environmental and Social Framework (ESF) was approved in February 2016 with the possibility for updates after the first three years of operation if needed.

There were concerns raised by civil society regarding not only the public consultation process of the ESF, but also its contents, in particular the reliance on corporate and country systems; lack of detail on the AIIB’s oversight mechanism; the omission of coal from its exclusion list; its adoption of the phased approach, which allows plans for impacts on indigenous groups to be made after project approval; and the lack of mandatory environmental or social impact assessments for projects in Category B, defined as having limited environmental and social impacts.

There is no doubt that China has massively increased the scale of development finance to developing nations across the world. It also appears that China-backed development banks represent a different emphasis for development policy than the Western-backed system, with a focus on infrastructure and structural transformation. The record thus far of the CDB and C-EXIM has raised questions whether Chinese banks are properly incorporating social and environmental risk into these activities, and the extent to which the project cycle is governed in a transparent and accountable manner. There is also concern regarding the implication of the more streamlined social and environment safeguard provisions in China-led development initiatives on the ongoing safeguards review at the World Bank.

It is too early to tell whether the new multilateral funds and new multilateral development banks will steer such finance toward infrastructure that is more environmentally sustainable and socially inclusive. China has put green finance as a major focus of its G20 presidency, co-chairing a Green Finance Study Group that will look to “green” global finance. A developing country-led effort to green global development finance in a manner that is inclusive, accountable, and green would be a welcome addition to the global development-banking regime. Such an outcome is not inevitable however, and should be the goal of policy-makers and civil society alike.